Upcoming in the Contemporary Arts arena is the Istanbul Biennial. It may be an interesting event to watch, so I thought a little background on events preceding it might be useful given the recent unrest in Turkey. Some general information about the event: 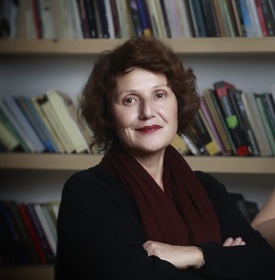 The Wikipedia entry looks like its mostly lifted from the History tab on the Biennial website (see below). Click on the Curator’s tab to learn more about 13th Biennial’s curator, Fulya Erdmeci, her name will come up in later links:

Koç Holding will come up from time to time as well. Here’s their Wikipedia entry:

From the New Contemporary Blog:

The 13th Istanbul Biennial will be held between September 14 and November 10, 2013, with Fulya Erdemci as the curator and Bige Örer as the director. This year’s conceptual framework takes its name from one of poet Lale Müldür’s books: “Mom, am I barbarian?” The focal point of the biennial – which is sponsored by Koç Holding, one of the biggest holdings of the country – will be the notion of the public domain as a political forum. (İstanbul Foundation for Culture and Arts (İKSV) had a sponsorship agreement with Koç Holding to support five editions of the Istanbul Biennial over ten years, from 2006 through 2016.) The fact that a biennial with the aim to bring urban transformation policies to the table is being sponsored by Koç Holding became a topic of discussion once the conceptual framework was revealed.

The New Contemporary article is a good read for background on the Turkish Summer, analogue of sorts to the Arab Spring. The Biennial protests staged by independent Turkish artists, immediately preceded the Gezi Park movement. While Gezi Park/Taksim Square quickly evolved and then escalated into something significantly more awesome, initially its agenda was the one articulated by the Biennial protestors. And the Gezi Park movement never seemed to lose the essential artistic aspect, the “sophisticated populism” that characterized the Biennial Resistance. With the added intensity of the Turkish government’s response to it, the Gezi movement morphed into a massive and severe indictment of Turkish governance. It is as if the entire nation convulsed in attempt to challenge the relevance of conservative governance for a nation grappling with modernity. But it was the Biennial protests, I think, that really set the stage for the “sophisticated populism” that energized Turkey.
http://thenewcontemporary.com/2013/06/06/turkish-protests-reach-art-scene/

I don’t know what I would call this other than “sophisticated populism.” It seems to be a similar spirit that energized the Gezi resistance:

The protestors wore t-shirts that said “Waiting for Barbarians,” turning their backs to show the writing, and read C. P. Cavafy’s poem “Waiting for the barbarians.” The aim was to counter Lale Müldür’s poem “Mom, am I a barbarian?” with another poem. The aim of the group is to show the economic power domain of urban transformation, according to the written statement.

Fleshing out the Biennial protests a little further:
http://www.bianet.org/english/culture/145359-urban-renewal-activists-protest-at-istanbul-biennial

Groovy satellite photo of the Bosphorus

Although the events that transpired over the summer at Taksim Square are likely well known, I’m including a few summaries for those who may have not kept up with it. I didn’t keep on top of it as it unfolded, but will have my eye on Istanbul this fall to see how the Biennial pans out. The following is a brief retrospective.

The following is a good read, but I take issue with this frame:

If you have been reading international news about the protests that started in Istanbul and have spread across Turkey, you may be under the false impression that this is an ideological battle between a secular piece of society and an Islamist Prime Minister Recep Tayyip Erdoğan, sparked by an insignificant event, the occupation of a city park. But the role of space in these outbreaks cannot be underestimated. As part of a project that would pedestrianize Taksim, Istanbul’s main square, the adjacent Gezi Park was to be demolished to build an Ottoman-via-Las Vegas Mall. The protest was an effort to save a park by occupying that very park; it was not a symbolic or ideological demonstration like the Occupy Wall Street movements, but a primal struggle between human bodies and bulldozers, that made the political discourse all the more potent.

What happened at Gezi Park wasn’t so localized; it spread to rural areas with a broader agenda, and it activated women in particular.

David Giocacchini from the Penn Libraries compiled an “archival guide” for the Gezi Park demonstrations with some pretty striking photo and video:

Shops on the Bosphorus

I include the Penn Guide and the following short documentaries because I’ve taken offense to the hyperbolic slinging of the term “police state” currently steamrolling the media in reference to the U.S government. Police state rhetoric more often than not derives from the fear-inducing fringe that can’t bear the idea of American espionage and can’t quite grasp that Freedom of the Press is like every other right – subject to restriction. Associating the American apparatus for handling crime-terrorism to a police state only demeans the experiences of people in legitimate struggle against an institutionally oppressive police state. Also, to stimulate thought on the proper parallels between liberty infringement – the right to peaceable assembly and, of course, free speech.

A short film produced by OccupyGezi:

The video embedded in the following link is a bit lengthy, but well worth watching. Note the gas mask graphic in the Roar editorial – probably one of the most striking images of political art I’ve seen in a long time. I’m struck by its “realistic symbolism.” By that I mean this isn’t metaphorical or hyperbolic imagery – wearing of gas masks was a reality for the Gezi Park protestors. There is brief mention in the video of how the movement embraced humor and its opponent’s critique as a tool of identity and resistance.  I draw attention to it because I think it is another example of what I previously termed “sophisticated populism.”

Turkey has been home or host to some of the most sophisticated and oldest civilizations the world has ever known. Its unique geographical position facilitated an extraordinary tradition of multiculturalism all throughout ancient times.  The Antikythera Device, for instance was probably derived and constructed in the great library city of Pergamum.

Whether it be known as Anatolia, Caria, Lycia, Lydia, the Land of the Hatti… what is now Turkey holds a special fascination for me.  I find it ironic and a sad commentary that a land once the epicenter of global cross-culturalism is now on the vanguard of rejecting the predatory globalization which threatens all cultural heritage everywhere.

I’ll end with one final link that doesn’t speak to the events noted here directly, but is a marvelous illustration of Turkey’s current struggle to reach modernity – another irony given its ultra-sophisticated heritage in the Ancient world. The following is a Turkish film from 2011 and deserving as wide an audience as it can find entitled, Once Upon a Time in Anatolia. It isn’t an American-paced movie by any stretch of the imagination. Appreciating it definitely requires patience. I watched it three times because of all that was woven into it. I’ll not say more than that for fear of spoiling the experience.  Here’s the IMDb link for reference: