One of the most amazing things about the US is its peaceful change after major elections.  It’s probably the time we should be most proud. We quietly transfer governance after we elect our officials.  It’s amazing to watch all of this even when you’re in the position of having to watch an elected official that you did not support.  Today’s inauguration really reflected and celebrated the diversity of today’s USA.  It’s weird how some people can’t even relax long enough to realize the country does so many things well.  Instead of embracing our exceptionalism, well, haterz gotta hate.

There were a number of sour looks (that’s Boehner’s wife with that look on behind the first couple), sour grapes, and sour comments coming from the sour loser contingent today.  There were many inspiring words in the President’s inauguration speech about giving every one the American Dream and the promise of equality.  Guess not every one likes that idea. 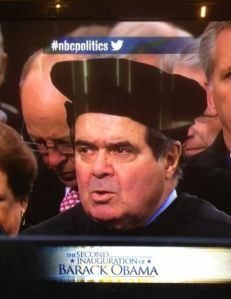 “I’ll probably stay away from twitter today-dont want to hear about this sad day for America + hear sheeple fawning over Obama- sickens me,” tweets AmericanAllegiance.

Free Republic posters feel maybe a little nauseous. One poster writes, “Make sure your TV is on. After all, ALL HAIL OUR KING, OUR GOD KING, KING OBAMA!” Others say they’re saving money by missing out. Another says: “By not turning my TV on today at all, I will probably save a LOT on my electric bill. I figure, at Least $.08. Every little bit helps.” A third thinks they’re the silent majority: “Wonder how the networks will fake the ratings on this fiasco….”

Wonder how Paul Ryan liked his personal take-down in the speech?  Ryan even got the Bronx cheer on the way to the ceremony.

President Obama took direct aim in his inaugural address at the Randian rhetoric that animates the politics of Rep. Paul Ryan (R-Wis.) and his conservative followers in the House and around the country, arguing that the United States is “not a nation of takers.”

For Ryan, the country is divided between “takers” and “makers.” He generally puts the number of the former at around a third, with the remainder in the producing category. The dichotomy has been a regular part of his rhetorical repertoire for years, and was elevated during the presidential campaign as Ryan sought the vice presidency.

Ryan argues that social insurance programs that are central to Western welfare states sap the citizenry of ambition. Obama took direct aim at that contention on Monday. “The commitments we make to each other — through Medicare, and Medicaid, and Social Security — these things do not sap our initiative; they strengthen us. They do not make us a nation of takers; they free us to take the risks that make this country great,” he said.

One of the most ludicrous tweets came from Ari Fleischer.  Here’s Paul Begala’s response to it.

Today we celebrated two big US holidays.   Never waste an opportunity to distort when you’re one of the disgruntled losers.

“MLK is rolling over in his grave, as the biggest racist in U.S. history gets sworn in on his birthday & using his bible,” tweeted Tom O’Halloran, who has almost 441,000 followers. 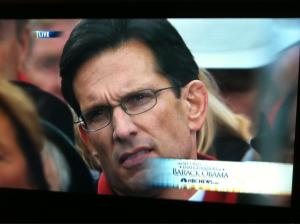 Oh, and we learned that Eric Cantor is visibly unappreciative of poetry and blessings in Spanish.  It’s just too bad we all can’t stop and consider what a wonder we have in a constitutionally-based change of government even when it’s not  total change.  After all, consider Syria, Libya and Egypt and their fight for liberation from dictators in the age of modern weapons.  Peaceful transitions should leave us breathless and feeling blessed.