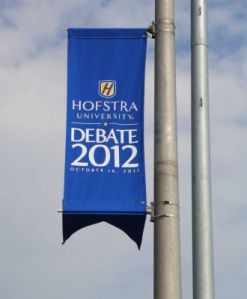 It’s ended.  What do you think?

Romney just talked about how it’s all about his belief in God and his missionary work and his work on the Olympics.  WTF?

Here’s a transcript if you missed it and the first question was:

Mr. President, Governor Romney, as a 20-year-old college student, all I hear from professors, neighbors and others is that when I graduate, I will have little chance to get employment. What can you say to reassure me, but more importantly my parents, that I will be able to sufficiently support myself after I graduate?

Here’s the NYT fact check of the debate:

One question heading into the debate: how would the president handle Secretary of State Hillary Clinton’s acceptance of responsibility for the violence in Libya?

His decision was to embrace the responsibility.

“Secretary Clinton has done an extraordinary job,” he said. “But she works for me.”

He also was aggressive in pushing back against Mr. Romney’s accusation that his administration has played politics in the aftermath of the killings of four Americans in Libya.