← SDB Evening News Reads for 090611: Texas is Burning, Obama is Spewing and We will rock you, fat bottom girls…
Tuesday Reads → 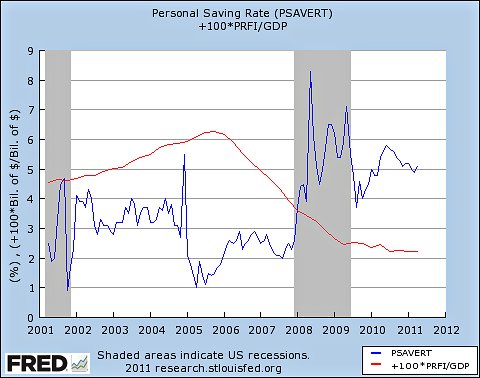 So, this week is filled with speechification on job creation.  Romney and Huntsman have two of the most incoherent plans I’ve ever read. As usual, it’s a hodgepodge of stuff that’s not about creating jobs.  And the other republicans in the race–like President Obama–have more checklists on Trade Agreements, lower taxes, patent reform, and tickling the fancy of some imagined confidence fairy. Again, all I can say is the High Priest of Voodoo and the Confidence Fairy have more power in this country than you and I.  I’m getting tired of basing public policy on people’s imaginary friends.

I’m not trying to scare you off with Nifty Graphs, but I want to use one from FRED via Paul Krugman showing the Personal Savings rate.  That’s the blue line. The Red line shows residential construction as a percentage of GDP which I’m less concerned about for this discussion but you can read about why it concerns Paul Krugman on his blog post “On the Inadequacy of the Stimulus”.  I’m just going to use it as proxy for US investment since it’s a portion of that.

This is really simple macroeconomics math.  People get income.  They do four things with that income.  A portion of that is sent to the government via taxes.  A portion is spent on purchasing things and services in the US called domestic consumption. A portion is also spent on imported goods and services.  This subtracts from our GDP as well as our income.  The lowest percentage of what we do with our income has been that portion dedicated to savings until–as the graph shows–the Great Recession.  Our savings rate has really gone up which means we’re spending a lot less.  Savings and money spent on imports take money directly out of the expenditures portion of our economy as do taxes.  Taxes come back to our county’s expenditures via Government spending.  This happens relatively quickly and is powerful because when the government spends, it spends.  It doesn’t save, it doesn’t buy imports as a rule, and of course it doesn’t pay taxes. Savings works its way back to the economy through investment which is the smallest part of our domestic expenditures.  Right now–as proxied by the red line–you can see that investment isn’t really happening.  Because we are a net importer, that income just drains out of our economy and stimulates economies elsewhere.  Now, I’m not a protectionist and this is not meant to be a post arguing we shouldn’t do Trade Agreements.  What I’m saying is that because of our expenditures patterns, that’s not really a net gain for us in terms of jobs.  We get access to cheap goods,yes, but it doesn’t really bring about jobs.  Right now, people are spending less and you can see that by the increase in savings, but it’s not getting invested back into the economy because of this vicious circle.  People save and don’t spend.  Businesses don’t have customers so they don’t hire and expand.  We’ve been trying tax incentives for businesses for three years and it’s really not working because increased savings means no customers.  Tax rates are not the primary motivator for either consumer or business spending. So, why does every one keep suggesting more of the same?  Why even bring trade agreements into the discussion?  We need direct job creation.  We need a strong middle class with healthy incomes.  We know how to do it.  Our politicians, however, are in opposites world.

Public pessimism about the direction of the country has jumped to its highest level in nearly three years, erasing the sense of hope that followed President Obama’s inauguration and pushing his approval ratings to a record low, according to a new Washington Post-ABC News poll.

More than 60 percent of those surveyed say they disapprove of the way the president is handling the economy and, what has become issue No. 1, the stagnant jobs situation. Just 43 percent now approve of the job he is doing overall, a new career low; 53 percent disapprove, a new high.

As part of a reinvigorated effort to regain momentum as he heads toward the 2012 election year, Obama traveled to Detroit on Monday for a Labor Day appearance that served as a prelude to his speech Thursday to a joint session of Congress in which he will unveil new proposals to create jobs.

The urgency for Obama to act is driven not just by the most recent unemployment report, which on Friday showed no job growth in August and the unemployment rate stuck at 9.1 percent, but also by the depth of the political hole in which the president finds himself. Even more than two-thirds of those who voted for Obama say things are badly off course.

By this time in their presidencies, approval ratings for both Ronald Reagan and Bill Clinton — who also suffered serious midterm setbacks during their first term — had settled safely above the 50 percent mark. Both then stayed in positive territory throughout their reelection campaigns.

When ratings for George W. Bush slipped into the low 40s during his second term in office, they remained there or lower for the remainder of his presidency.

Obama does, however, rate better than do congressional Republicans, his adversaries in recent, fierce confrontations on federal spending. Just 28 percent approve of the way Republicans in Congress are doing their job, and 68 percent disapprove, the worst spread for the GOP since summer 2008.

When it comes to head-to-head match-ups on big economic issues, the public is deeply — and evenly — divided between Obama and congressional Republicans. Four in 10 side with both Obama and the GOP on jobs. There are similarly even splits on the economy generally and on the deficit. In all three areas, the percentages of Americans trusting “neither” are at new highs.

Nonetheless, current trends are highly unfavorable for the president. By 2 to 1, more Americans now say the administration’s economic policies are making the economy worse rather than better

So, in the midst of these terrible numbers comes a call by Boehner and Cantor to Obama to meet prior to the President’s latest speechification which is alway basically a lot of words that eventually mean nothing.  They are dangling that partisanship football–like Lucy to Charlie Brown–just one more time  Will Charlie Brown Obama go for it one more time?

House GOP leaders on Tuesday asked President Obama to meet with congressional leaders from both parties to discuss his jobs plan ahead of his Thursday night address to Congress.

In a letter to Obama, House Speaker John Boehner (R-Ohio) and Majority Leader Eric Cantor (R-Va.) cited the need for a bipartisan deal on jobs in requesting the meeting. Their letter also outlined potential areas of cooperation.

“We would suggest that prior to your address to Congress you convene a bipartisan, bicameral meeting of the congressional leadership so that we may have the opportunity to constructively discuss your proposals,” the letter said.

Keeping to my Peanuts metaphor:  ARGHHHHHHHHHHHHHHHHHHHHH!  The only jobs plan the Republicans have at the moment is to put Obama into the unemployment lines. Congressional Democrats appear just as unwilling to take principled stands based on sound economics.  Nancy Pelosi has now dropped the word “stimulus“. The unbelievable yielding Democratic Party folds every time.  It’s no wonder we’re in the mess that we’re in right now and people are frustrated.

Democrats are now being careful to frame their job-creation agenda in language excluding references to any stimulus, even though their favored policies for ending the deepest recession since the Great Depression are largely the same.

Indeed, with President Obama scheduled Thursday to lay out his job-creation plans before a joint session of Congress, liberal Democrats and left-leaning policy groups are pressuring him to ignore short-term deficit spending concerns in favor of sweeping spending initiatives designed to boost hiring.
The Democrats’ signature “Make it in America” platform aims to create jobs by increasing infrastructure spending, providing financial help to struggling states and expanding tax credits for businesses, all of which were key elements of their 2009 economic stimulus bill.

Recognizing the unpopularity of the 2009 package, however, Democratic leaders have revised their message with less loaded language – “job creation” instead of “stimulus” and “Make it in America” in lieu of “Recovery Act” – in hopes of tackling the jobs crisis.

Repackaging meaningless rhetoric on important issues that you refuse to fight for is a frigging’ losing strategy. The Republicans know it. One of the most interesting things I’ve read all week is this call in Bloomberg by a writer from the National Review for Republicans to get behind some one electable because Republican Party Central smells the blood in the water. Both parties have these terrible pathological behaviors.  The Republicans are overrun at the moment by the craziest of the crazies with ideas that would bring down the republic.  Democrats can’t seem to do anything but dither and try to find new buzz words to repackage already failed ideas that hand over everything to the donor class.  Lost in all of this are hard working American people who do not understand why normal governance stuff is not getting done.  It just seems like more and more of what used to make American strong is going, going and gone.  A pox on both their houses.  I want an alternative.