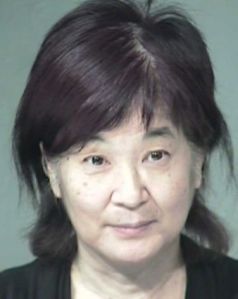 I’m not surprised that it was a 61-year-old woman who finally gave a TSA agent a taste of her own medicine. The older I get, the less willing I am to put up with sh&t from other people. I’m guessing Yukari Mihamae has experienced the same kind growing inability to suffer indignities that I have. Not that I’m defending what she did…but I can understand where she was coming from when she did it.

Phoenix police say 61-year-old Yukari Mihamae is accused of grabbing the left breast of the unidentified TSA agent Thursday at an airport checkpoint.

TSA spokesperson Kawika Riley confirmed the altercation to msnbc.com in a statement: “On July 14 at Phoenix Sky Harbor International Airport, local law enforcement arrested a passenger for assaulting a TSA officer during the screening process.”

TSA staff say Mihamae refused to be go through passenger screening and became argumentative before she squeezed and twisted the agent’s breast with both hands.

When police showed up, the woman readily admitted grabbing and twisting the TSA agent’s left breast. Mihamae was arrested and charged with felony sexual abuse. She has since been released.

The Daily Mail has lots more. It seems Mihamae was on her way back home to Longmont, Colorado when the unfortunate incident took place. I’m guessing she had already experienced a number of indignities on her way to Phoenix, and she just got fed up and lost it. As reported in the Daily Mail article, one of Mihamae’s neighbors told a local TV station:

‘For her to be arrested for anything is totally shocking to me.

He said that his neighbour travels about three days a week. Court records show that she is self-employed.

Wow! If she travels that much by air, no wonder she couldn’t take the TSA groping anymore! The TSA spokeperson had no idea why Mihamae would choose to do such thing. But supportive fans responded by setting up Facebook pages in her honor.

‘You go girl,’ ‘Fight the power’, and ‘My new hero’ were comments posted on Facebook groups set up calling for Mihamae to be acquitted.