Perhaps Strauss-Kahn Really WAS Set Up? 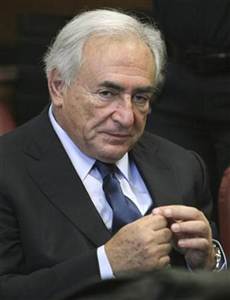 Lots of people questioned the convenient timing of the Strauss-Kahn arrest, and I pooh-poohed them. Now The New York Times is reporting that the woman who accused former IMF head Dominique Strauss-Kahn of sexual assault is turning out to be a very different sort of person from the simple hotel maid she had originally appeared to be–so much so that the case against Strauss-Kahn is “on the verge of collapse.”

Although forensic tests found unambiguous evidence of a sexual encounter between Mr. Strauss-Kahn, a French politician, and the woman, prosecutors do not believe much of what the accuser has told them about the circumstances or about herself.

Since her initial allegation on May 14, the accuser has repeatedly lied, one of the law enforcement officials said….Among the discoveries, one of the officials said, are issues involving the asylum application of the 32-year-old housekeeper, who is Guinean, and possible links to criminal activities, including drug dealing and money laundering.

Either the woman or her boyfriend, who is currently in jail for possession of 400 pounds of pot, has apparently been using her name to facilitate a drug dealing operation. She claims she didn’t know anything about all this, but she was recorded talking to the jailed man about how they could profit from the sexual assault charges against Strauss-Kahn.

They also learned that she was paying hundreds of dollars every month in phone charges to five different companies. The woman insisted she only had a single phone and said she knew nothing about the deposits except that they were made by a man she described as her fiancé and his friends.

Could she have been paid to set Strauss-Kahn up and get him fired from the IMF as well as dropped from consideration as a candidate for President of France? If so, who set him up? Who had motive, means, and opportunity, and who benefited? I see a couple of possibilities:

1. The Brits and Americans wanted him off the IMF so they could really stick it to Greece. Strauss-Kahn is a socialist and was talking about trying to help struggling countries. Obviously the Obama administration or some rogue element in the government had means and opportunity.

2. Sarkozy wanted to get rid of a dangerous rival for the French presidency and also to install his Finance Minister as head of the IMF. He would probably need cooperation from the Obama administration or the aforementioned rogue government elements to get the NYPD on board. (Coincidentally (or not?), Sarkozy was attacked in France today).

Are there other possibilities I’ve overlooked?

43 Comments on “Perhaps Strauss-Kahn Really WAS Set Up?”