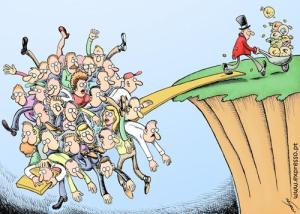 US Income Inequality – Too Big To Ignore

I had to frontpage this because I just can never make this point enough.  Vast income inequality is not the sign of a healthy society or economy.   H/t to Corrente for my first look at this Joseph Stiglitz article at Vanity Fare called ‘Of the 1%, by the 1%, for the 1%’. We’re back to the Versailles days and the Bush tax policies–extended by Obama–are a good part of the source of the problem.  I hate to just lift just one paragraph out of Stiglitz’ rant because the entire thing is worth reading. However, here’s two for starters.  Go read the entire thing, please.

But one big part of the reason we have so much inequality is that the top 1 percent want it that way. The most obvious example involves tax policy. Lowering tax rates on capital gains, which is how the rich receive a large portion of their income, has given the wealthiest Americans close to a free ride. Monopolies and near monopolies have always been a source of economic power—from John D. Rockefeller at the beginning of the last century to Bill Gates at the end. Lax enforcement of anti-trust laws, especially during Republican administrations, has been a godsend to the top 1 percent. Much of today’s inequality is due to manipulation of the financial system, enabled by changes in the rules that have been bought and paid for by the financial industry itself—one of its best investments ever. The government lent money to financial institutions at close to 0 percent interest and provided generous bailouts on favorable terms when all else failed. Regulators turned a blind eye to a lack of transparency and to conflicts of interest.

When you look at the sheer volume of wealth controlled by the top 1 percent in this country, it’s tempting to see our growing inequality as a quintessentially American achievement—we started way behind the pack, but now we’re doing inequality on a world-class level. And it looks as if we’ll be building on this achievement for years to come, because what made it possible is self-reinforcing.

The other reason that I decided to front page this is the here-here response from Michael Tomasky at the UK Guardian.  It’s aptly called ‘Sad, just sad’.  He mentions something we’ve said for some time.  The villagers are also the beneficiaries of this kind of windfall.  Why would those DC beltway types want to downsize when they can blame teachers, nurses, firefighters, and police officers for all those budget woes? It’s the overgenerous tax cuts.  A nation can’t sustain itself without roads, airports, electrical grids, education, and public health and safety programs unless your idea of an ideal nation is that found in the Grapes of Wrath.

Stiglitz might have added the very important point that the majority of the country’s most prominent pundits who go on television and interpret all this for the American people, who soothe their audiences with assurances that all this is completely reasonable, are in the top 1%, which means households above around $380,000 per year. Many of course are far above that (Bill O’Reilly, Rush Limbaugh, etc.). High-end print journalists who aren’t quite at that level are still likely in the top 2%.

Anyway, the piece makes many important points, all of which boil down to the idea that while income inequality has several initial causes, there is only one thing that sustains it: a political process that is owned lock, stock and barrel by the top 1%.

Stepping back and looking at this context, and staying aware of it, makes watching these budget cuts particularly noxious. That’s not to say there isn’t waste, fine. But it is to say that the US political system of today is pretty inevitably designed to help the rich and punish the poor. So it’s no surprise when GOP Congressman Paul Ryan proposes, as he just has, cutting $1 trillion from Medicaid, which provides health care for poor people and the disabled (and to some extent, a greater extent than many people are aware, middle-class families, too, in the form of nursing-home cost support or in-home services like those from NY CDPAP agency).

Yes, Medicaid costs are high, killing the states. The feds could actually pick them up. Ronald Reagan proposed doing this. But that would be radical today. If Americans, especially wealthy ones, were paying taxes (income and capital gains) even at the rate we were in the Reagan era, we’d have no budget problems.

This brings me to the latest “Dopiest Constitutional Amendment of All Time”  discussed by former economist Bruce Bartlett. The very same people that gutted tax revenues and funding sources for ten years and went on a spending spree on Treasury Bills now want to demand a federal balanced budget amendment.  It’s not like watching the states get into deep trouble with their own versions of the stupid thing has taught any lessons.  Balanced budget amendments simply lead to bad economics.  When the revenues come in, the politicians spend like crazy on unnecessary things because the money’s there and the economy doesn’t require the expenditures.  When the recession hits, the revenues go down, and the balance the budget part hurts, they start doing things that basically put their states in worse situations.  This should be immoral, unethical and illegal.  Instead, they stick in constitutions.  Evidently none of these guys ever got away to reading the Grasshopper and the Ant. They’re all Grasshoppers until the real need for fiscal management comes into play.

Today, all 47 Senate Republicans introduced a constitutional amendment to balance the federal budget. Full text available here. Presumably, this is the amendment that Republicans plan to demand as their price for increasing the federal debt limit. Of course, simply refusing the raise the debt limit would balance the budget overnight — the nation would default on its debt and we would be plunged into the worst fiscal crisis in history, but the budget would be balanced. I have previously explained the idiocy of right wing advocates of debt default (here and here) and the idiocy of a balanced budget amendment (here and here). However, the new Republican balanced budget proposal is especially dimwitted.

At what point do the Republicans just change their name to the party of Batshit Crazy Liars?  At what point do the Democrats start fighting some of this?  It’s unbelievably hard to watch a group of people with so little at stake except their own re-election just run through a country’s future and assets like a Mardi Gras krewe tossing trinkets to bystanders.  How much more looting of national resources to benefit their cronies can we honestly take before people really take to the streets and say enough!