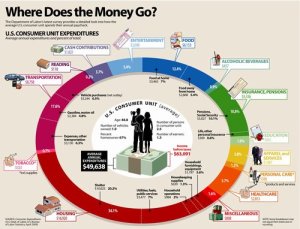 An interesting picture of the changing American consumer can be found in the post by Mike Mandel called “Where Americans are Spending More”. Conversely, it also shows where we are spending less. I compared some of my old budgets to my new ones and found that I’m not so far off the averages. The big consumption item these days is for telecommunications. Pets, Education, Childcare, and Health care expenditures are also on the rise. Some of these are undoubtedly due to bigger prices but they show that people are continuing to spend and not dropping their dollar commitments on some items.

Consumption cutbacks occur in areas like apparel. That’s actually not surprising because it’s cheaper than it used to be because all of the manufacturing has gone abroad to low cost labor country. Also, a lot wardrobe expenses aren’t a necessity for most people. The biggest drop in the list came from staying put. Less people are moving. Motor Vehicles also are on the big down list. That’s not surprising either since big consumer durables are the first to get hit in a recession and even the cash for clunkers can’t overcome that and a tough credit environment for ever. Sports and recreational vehicles have also lost some market power as well as video games and audio equipment. Again, not too much of a surprise because folks live with the old stuff longer during recession and tend to back off high end trips. Travel outside the U.S. has dropped too. My guess is that a lot on that list has to do with relative prices but I’m not a microeconomist so it’s just an educated guess.

Frankly, it looks like we’re engaged in a lot of nesting activity 0ther than jaunts to local restaurants for a night on the town. If you want to know what a typical American has spent money on for the last 30 years, look here. This study look at what folks have bought since Ronald Reagan was in office. It’s 30 years worth of folks keeping diaries on their household consumption.

Changes in the relative shares of average annual expenditures include:

Here’s some of the items that seem to be on the rebound with the improving economic condition. These are easy categories for people who hate the devil in the details.

1) Investments in My Quality of Life (vacations, home improvement, dining out and home furnishings): There is no easy substitute for these items. Some tend to be more of an experience vs. a possession therefore they are more resilient: less likely to be cut back, and more poised for a rebound as people feel their financial situation improve.

2) Things I Don’t Think About: These include activities for children and subscription services such as cable TV/Internet and magazines. People are less likely to cut back on things that they need to “opt out” of, as opposed to purchase decisions they need to make every time they buy. They are also less likely to cut back on experiences (especially for/with their family) than things.

3) Things that Entertain Me: This category includes spending on video games, books and electronics. In the end, people still have time to fill. In many cases they are looking for more efficient ways to fill it: best balance of utility (i.e. fun) and price.

4) Guilty Pleasures: This category includes spending on items such as jewelry, designer clothes and shoes. Items seen as “frivolous” purchases—particularly those where consumers can’t rationalize a tangible value—face the most difficult road to rebound. This trend was consistent across income levels: even more wealthy people need better reasons to buy. However the aspiring affluent are particularly vulnerable, people with expensive tastes, but with incomes that aren’t large enough to be recession-proof.

Remember, Household spending accounts for about 67% of all GDP so any significant changes are bound to impact the economy. Recognize yourself in any of these patterns?