← The Best Laid Plans Of Mice and Men
It’s Mardi Gras: You know, the Party before Penitence? →

I found this neat article on 13 tipping points by Market Watch’s Paul Farrell.  I managed to read it in between multi-napping and watching the Dow go down in response to the the State of the Union Address and bad  numbers coming out of housing.  Then, I watched the market return to a more neutral position following Ben Bernanke’s second day of congressional testimony .  I decided it might be a good idea to talk about how information comes into markets and how markets react to that information using his article.

The article is subtitled why “Obamanomics may backfire, triggering the next Great Depression”.  It’s actually less about Obamanomics than it is about the number of unquantifiable ‘shocks’ to the macroeconomy that may lurk out there and panic or entice Wall Street.  These shocks (called so because they shock the economy and frequently appear unforeseeable) represent a huge amount of risk but can’t be easily written into the mathematical models.  They wait out there like a cat ready to pounce on an unsuspecting mouse.  Farrell’s basic point is that we don’t know right now if the stimulus package will work because there is too much unquantifiable risk out there.  However, just because the mouse is unsuspecting, I always think that there must be ways of detecting that big old cat. Hence, I research.

Usually the chance of the shock can be added into a model using Bayesian ‘dummy’ variables.  They take on either a 1 or 0 value and are ‘weighted’ by the probability of realizing the event.  So, the 13 variables that Farrell lists could be used to cause a negative shock (using a negative one for the occurrence of the event) times its Bayesian probability (say something like a 20 % chance of occuring vs a 80% chance of not occuring).   Shocks can also positive impact by using a positive 1 for the occurrence of the event say like a technological advance that just suddenly happens.

Farrell identifies these 13 things that are possibilities that haven’t been “quantified” by most Wall Street Risk models because these models focus on getting at the risk and pricing of an asset using asset-related events, rather than macroeconomic-related events.  Here’s his list.  It’s a basic what’s what of tinfoil hat scenarios. 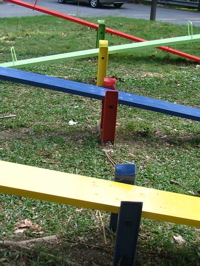 Using Malcom Gladwell’s idea from the Tipping Point (a book club selection that Readers of the Confluence will recognize,),  Farrell isn’t sure if any of these dicey situations will actually reach that critical place where the event impacts everything it touches.  Hence, becoming one of Gladwell’s Tipping points.

More significant, although invariably left out of Wall Street’s equations, true economic tipping points will grow to a “moment of critical mass, the threshold, the boiling point,” according to author Malcolm Gladwell, where “change” (whether positive or negative) is “unstoppable.” And although left out, these macroeconomic variables can account for over 90% of the risk in an economic equation or derivatives contract, as we’ve discovered so painfully this past year.

These are items that we know about so  some one should be able to assign probabilities to them. Then they could be entered into a risk equation for either an asset or any other economic variables, hence ‘quantifying the risk’.  However,  if we assume that every one knows this list, can reasonably assign each an event a probability, then chances are the current market price already reflects the market’s estimate of the impact of this event already.  This is a situation where markets are called rational and there are several subsets of rationality when looking at a market.  The Rational Market Hypothesis rules asset pricing models these days.  It says that it is reasonable to say that  an asset price, like a stock or a bond of a company will have such an event and its probability ‘discounted’ into it.  The only time you see major volatility in a stock or a bond price  is when the marketing is adjusting the probabilities around that event due to some new piece of information.  So say, a company doing a lot of business in Venezuela will have its stock price move around a lot when Chavez threatens nationalization or gets elected President for Life ala Castro.  Another example would be when something goes very wrong in the middle east, like bombings, and the price of oil and the stocks of companies having something to do with the middle east oil as well as the price of oil itself goes crazy around the information.

This kind of volatility is what we’ve been seeing a lot of recently as the market tries to access things like what an Obama presidency might mean to say, the Health Care Industry or to the Banking Industry.  You can see that much of the volatility in the market recently has been in Finance company stocks.  This is especially true of Citibank.  If the market cannot make sense of say, the Geithner policy, it sees unpredictability and lack of clarity, and basically tries to adjust immediately by upping the riskiness of the asset and lowering it’s value.  The two Bernanke testimonies before Senate and Congressional committees has added clarification on the nationalization and recapitalization process so it has ‘calmed the market’ and adjusted the risk probabilities.  Part of some of this analysis has to do with the way new information comes to the market, however.  In most cases, the information is assumed to come randomly or out of the blue and is not expected.   (We call that a ‘random walk’.) 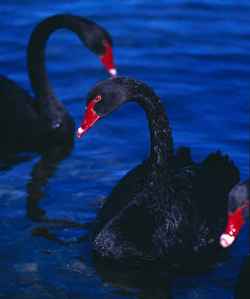 nowhere.  There’s a competing theory now for the random walk.  One that I find very appealing.  Nassim Nicholas Taleb characterizes these as “Black Swans” in his book of the same name.  His website is called Fooled by Randomness.   Farrell has this to say about the Black Swan idea.

“Black Swan” author Nassim Nicholas Taleb is far more caustic in his Fortune indictment: “It is the ‘science’ of risk management that effectively turned” Wall Street into clueless robots. “We replaced so much experience and common sense with ‘models’ that work worse than astrology, because they assume that the Black Swan does not exist. Trying to model something that escapes modelization is the heart of the problem.”

Taleb is brutal: “Greed pushes bankers to take the maximum amount of ‘hidden risks,’ those risks that do not show on a regular basis because the models miss it, but end up causing blowups. Banking is a very treacherous business because you don’t realize it is risky until it is too late,” till after a Black Swan surprises us, triggering an economic meltdown, like now, and we’re stuck cleaning up the mess.

In an article on Reuters written by James Saft, Taleb has offered up ideas on how to ” save capitalism and markets from the banks” which is extremely interesting.   Here is Saft’s account of Taleb’s discussion at Davos back in January.

Nationalise the banks, limit the rewards to those who work in what he calls the “utility” part of the system and have a completely uninsured second leg that can take all the risks it wants and lose its shirt, he said in an interview in Davos at the World Economic Forum.

“They rigged the game. We pay them for their profits, there is no clawback so their incentive is to hide the risk they are taking.”

“Which is why eventually as someone who loves free markets,  a total nationalisation of the part of the business that requires insurance and does clearing and payments needs to happen.”

“I am angry with U.S. policy. What we had is exactly the opposite of socialism, they got TARP to pay their bonuses and to take more risk.”

He describes his plan as Capitalism 2.0. It would have a barbell structure, with the insured utility-like part on one end and the free market bit with privatized risk on the other.

He describes banking bonuses as asymmetric because the banker gets the upside but does not share in the liability which ultimately may be funded by taxpayers, as we have seen.

Taleb, who as you may have noticed doesn’t mince words, is no fan of private equity.

“Private equity has absolutely no reason to exist. The private equity holder has all the upside and the banks all the downside.” He’d have no objection to a system where private equity funds itself via hedge funds, so long as neither party had any recourse to government insurance.

The interesting things about the Black Swan idea basically comes from the story surrounding the actual Black Swans.  People used to think that Black Swans were impossible.  Then, they found Black Swans in Austraila.  So, a Black Swan is frequently something we don’t see coming because we believe it doesn’t exist to begin with.   So the idea is that even though the event appears to come out of the blue, in actuality it is there, gathering steam, building to a tipping point, and was ‘expectable’ with hindsight.

So, how does this tie back in with Obamanomics and will we see the next  Great Depression?  Basically, the answer is that there may be something out there gathering steam about which we’ve not gathered enough information that could enter the equation and change everything.    Farrell’s arguing, along with Warren Buffett, that at this point we simply can’t project the outcome at this point because we cannot quantify the unquantifiable.

Here’s Taleb’s original little academic gem that was written in 2004.  If you liked the Tipping Point.  I’m sure you’ll love this.  I now have more questions than answers a but I’m thinking that tinfoil hats may be the new black.