← When Will They EVER Learn?
Krugman Gets It Right Again →

Tax Cuts Don’t Cut It or Cure It!

The economics blogosphere is pretty lit up with discussion about Krugman’s latest Op Ed piece  questioning the motives of Republicans over the Obama Stimulus Package.  Believe me it was a joy to read Krugman call down John Boehner for spouting ‘dishonest flak’.  I also enjoyed reading Brad Delong  dispatch Ben Stein (a real economics midget) and John Cochrane (one of the supposed gods of finance) with such ease.  As I have often said here and they argue effectively in the links, there’s a big difference between using tax cuts and government spending for stimulus.  These discussions have pretty much been based on theory we teach first year econ students which makes Delong’s send off of THE John Cochrane even funnier.  Tax cuts just are not an effective way to get an economy off of a downward economic spiral caused by decreases in investment and household activity.  PERIOD.

But rather than rehash my previous pieces here or paraphrase Delong and Krugman, let me take a different track.  No theory this time for me.  I’m going to share with you a nice piece of empirical work by Larry Mishel that proves the point just as effectively.  Hello, Congressman Boehner!  We TRIED tax cuts to stimulate the economy just a few years ago in 2003.  Remember those?  And guess what?  THEY DIDN’T WORK!!!!!    Larry Mishel demonstrates quite effectively that the 2003 tax cuts for “Jobs and Growth” neither created jobs OR growth.

Tax cut approach has already been tried and failed as stimulus:…[The administration claimed t]he Bush tax cuts of 2003 … would generate 1.4 million jobs on top of the 4.1 million jobs that were expected to be generated over the eighteen months following June 2003. See [here]…

EPI tracked the initiative’s effectiveness through a website, www.jobwatch.org, and found that it fell far short of its goals. Not only did the promised 1.4 million additional jobs not appear, but the 4.1 million jobs expected with no action also failed to materialize. In all, only 2.4 million jobs were created—1.7 million short of the administration’s projection without their new policy. Thus, by the Bush administration’s own metrics the tax cut program fell short by a total of 3.1 million jobs (149,000 pr month). For an analysis of how the Bush 2003 tax plan (The “Jobs and Growth” plan) fell short of its job claims see [here]…

On what basis can the conservatives who embraced those failed initiatives now claim that tax cuts are the best policy?

You can go read more of Mishel or take a glance at the  astute analysis from Economist’s View .  This is the blog of University of Oregon Economist Mark Thomas.  You” ll get more of what we’ve all been saying for some time about Voodoo Economics.  Skip the damn tax cuts!  They don’t work! From Dr. Thomas:

So the tax cut policy isn’t really about stabilization policy. There could be jobs that are created from tax cuts, even in the short-run, but in its heart of hearts the tax cut policy is about cutting revenues at every opportunity in an attempt to reduce the size of government. If you doubt this, ask yourself what the right will argue when the economy starts to improve.

The last time I talked about the Republican cure-all for anything–tax cuts–Steven Mather who contributes to my blog likened it to the Republican version of apple cider vinegar.  Republicans argue that it’s good for whatever ails you.   I’m glad, however, that many academic economists are finally crawling down from their ivory towers to outwardly name this obfuscation for what it is: potential poison to all things done by the government.

As Krugman says, Republicans hate the New Deal and really don’t want this stimulus package to work.  They want this even at the cost of dragging this downturn on for some period of time. Limbaugh has even said as much too.  This is because if a large government purchase led stimulus works a second time, it will more than clearly dispatch the continual politically motivated drivel Republicans spout about the New Deal.  They can no longer point to only World War 2 as the savior of the American Economy in the 1940s when things were clearly on the mend in the 1930s.

If a second New Deal works, and clearly economists from all sides (yes, even Martin Feldstein) believe that government spending in this case can do it, Republican radicals can no longer try to dismantle the successes of the New Deal–especially Social Security–under the guise of anything other than tearing the fabric of the safety nets away from millions of Americans.  I hope, as economists, we continue this public discussion.  I, for one, will not shut up about it.

As I continue to watch my privately managed Optional Retirement Plan be flushed down the drain of Wall Street greed, I’m more and more thankful for the existance of Social Security every day.  It is, the very important third leg of the retirement stool.  It has frequently been the last leg standing for many people–including my father the retired ford dealer and ww2 medal laden veteran.

This does not mean that we should not be on the watch for pork in the Obama stimulus, indeed, if Senator John McCain or other folks concerned with the content of the package think there’s abuse, by all means point it out and deal with it. Just stop pushing the meme that tax cuts will deliver us from all evil.  It simply isn’t the case.  It’s dishonest.  Republicans want to kill all remnants of the New Deal and continue to strangle government.  So, in a similar vein, President Obama and the Obama administration need to quit pandering to these folks in the name of bipartisanship when it clearly isn’t the intent of the Republicans to behave in a rational manner.  Let them work out the details of the TARP with Pelosi.  Put down the tax cuts and send in the solutions offered up by the professionals, not other politicians.  President Obama, stop hiding behind the safe mantle of bipartisanship and just use your damn bully pulpit!  You promised real change, get on with it! 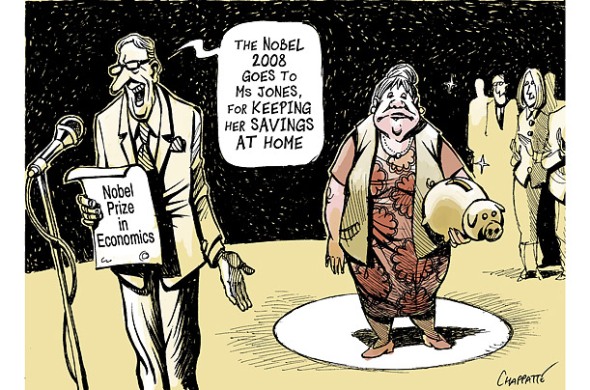