Couch on the Porch at Cos Cob by Childe Hassam, 1914

Secretary of State John Kerry is under fire for making a frank statement in a closed-door meeting that he believed to be private. Politico’s Dylan Byers reports: John Kerry’s private remarks allegedly taped by Daily Beast reporter.

Secretary of State John Kerry’s private remarks to a meeting of influential world leaders last week were allegedly taped by a reporter from The Daily Beast, a fact that led to a personal apology from Trilateral Commission chairman Joseph S. Nye on Monday.

In a letter to Sec. Kerry, obtained by POLITICO, Nye expressed “my deep apology and dismay that a reporter form The Daily Beast, Josh Rogin, somehow sneaked into the meeting room in which you were speaking to the Commission this past Friday.”

“He was not invited,” Nye wrote. “Althought how Mr. Rogin slipped past both Commission staff and Diplomatic Security is unclear to me, we have confirmed that he indeed was present and apparently recorded the session.”

Rogin, who somehow sneaked into the meeting and taped Kerry’s remarks, soon began posting “exclusives” at The Daily Beast.

Within minutes of Kerry’s remarks on Friday, Rogin posted an exclusive to The Daily Beast in which he reported that Kerry had “warned that [a] new round of American financial assaults on Russia were on the way.”

On Sunday, Rogin posted another exclusive headlined, “Kerry Warns Israel Could Become ‘An Apartheid State’.” The report earned Sec. Kerry fierce criticism from Jewish organizations such as AIPAC, which called the remarks “offensive and inapropriate,” and the Anti-Defamation League, which called them “incendiary.”

In the first article, Rogin attributed his knowledge of Sec. Kerry’s remarks to “an attendee.” In the second article, he attributed them to “a recording… obtained by The Daily Beast.” Rogin did not mention his presence at the event in either article.

Is that okay according to journalistic ethics? I don’t know, but this definitely demonstrates to me the need for some secrecy in government diplomacy. I think the Greenwaldian notion of government as absolute enemy has rubbed off on reporters like Rogin. His first “exclusive” was on a breakdown of communications between the White House and the Kremlin and the second was about Kerry’s comments on Israel. Rogin writes:

If there’s no two-state solution to the Israeli-Palestinian conflict soon, Israel risks becoming “an apartheid state,” Secretary of State John Kerry told a room of influential world leaders in a closed-door meeting Friday.

It wasn’t the only controversial comment on the Middle East that Kerry made during his remarks to the Trilateral Commission, a recording of which was obtained by The Daily Beast. Kerry also repeated his warning that a failure of Middle East peace talks could lead to a resumption of Palestinian violence against Israeli citizens. He suggested that a change in either the Israeli or Palestinian leadership could make achieving a peace deal more feasible. He lashed out against Israeli settlement-building. And Kerry said that both Israeli and Palestinian leaders share the blame for the current impasse in the talks.

Kerry also said that at some point, he might unveil his own peace deal and tell both sides to “take it or leave it.”

“A two-state solution will be clearly underscored as the only real alternative. Because a unitary state winds up either being an apartheid state with second-class citizens—or it ends up being a state that destroys the capacity of Israel to be a Jewish state,” Kerry told the group of senior officials and experts from the U.S., Western Europe, Russia, and Japan. “Once you put that frame in your mind, that reality, which is the bottom line, you understand how imperative it is to get to the two-state solution, which both leaders, even yesterday, said they remain deeply committed to.”

It’s hard for me to find much fault with that. I guess the use of the term “apartheid” is a no-no, Kerry is not the first to use it. As Rogin notes, former President Jimmy Carter wrote a book in 2007 with the title Palestine: Peace or Apartheid. Carter was forced to backtrack somewhat, and Kerry has had do it also. Michael Gordon at The New York Times: Kerry Apologizes for Remark That Israel Risks Apartheid 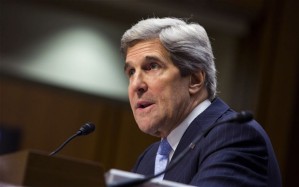 In the statement that Mr. Kerry issued Monday, which bore the title “On Support for Israel,” he said that he had been a staunch supporter of Israel during his years as a senator and had spent many hours since working with Prime Minister Benjamin Netanyahu and other Israeli officials.

Mr. Kerry added that he did not believe that Israel was an “apartheid state” or intended to become one. Mr. Kerry did not dispute he had used the phrase but said it had led to a “misimpression” about his views.

“If I could rewind the tape, I would have chosen a different word to describe my firm belief that the only way in the long term to have a Jewish state and two nations and two peoples living side by side in peace and security is through a two state solution,” he said.

“In the long term, a unitary, binational state cannot be the democratic Jewish state that Israel deserves or the prosperous state with full rights that the Palestinian people deserve,” he added.

Kerry has now been attacked for his remarks by Senators Ted Cruz and Barabara Boxer. Quite an achievement!

Rogin’s latest “exclusive,” published this morning, reveals (surprise, surprise!) that the U.S. is spying on calls between Russia and it’s spies on the ground in Eastern Ukraine. You’d think that would be a good thing, but in the age of Greenwaldian “advocacy journalism,” maybe not. Rogin:

“Intel is producing taped conversations of intelligence operatives taking their orders from Moscow and everybody can tell the difference in the accents, in the idioms, in the language. We know exactly who’s giving those orders, we know where they are coming from,” Kerry said at a private meeting of the Trilateral Commission in Washington. A recording of Kerry’s remarks was obtained by The Daily Beast.

Kerry didn’t name specific Russian officials implicated in the recordings. But he claimed that the intercepts provided proof of the Russians deliberately fomenting unrest in eastern Ukraine—and lying about it to U.S. officials and the public.

“It’s not an accident that you have some of the same people identified who were in Crimea and in Georgia and who are now in east Ukraine,” said Kerry. “This is insulting to everybody’s intelligence, let alone to our notions about how we ought to be behaving in the 21st century. It’s thuggism, it’s rogue state-ism. It’s the worst order of behavior.”

Rogin goes on to speculate on whether the NSA has now corrected issues that prevented them from receiving accurate intelligence on Russia’s plans to invade Ukraine and annex Crimea and explains the methods NSA uses to collected such information. I guess they will have to go back to the drawing board again now? In the latest piece, Rogin still does not state that he is the source of the tapes of Kerry’s remarks.

Reuters has an article this morning on Israel’s latest plans: Israeli politicians seek to bypass talks, set own boundaries.

With Middle East peace talks frozen and expectations of a negotiated deal at an all-time low, a growing number of Israeli politicians believe it is time for the government to set the nation’s own borders unilaterally.

Some seek the annexation of most of the occupied West Bank, others say only the big Jewish settlement blocs should be brought under Israeli sovereignty, while a third group calls for a partial pullout to create a de facto Palestinian state.

Such actions would break the dynamics of the U.S.-driven peace process, which has been bogged down by years of failure and recrimination. By the same token, it would likely unleash a firestorm of protest at home and abroad.

Isn’t that just ducky? Read lots of details at the link.

This is just breaking (9AM EST) . . . there has been a mass shooting at a FedEx location in Georgia.

At least six people were injured in a shooting early Tuesday at a FedEx facility in Kennesaw, Ga., officials said.

The male gunman remained at large, and police said they are sweeping the surrounding area, reported NBC affiliate WXIA-TV.

Cobb County police said the call came in at 5:44 a.m., prompting a lockdown of the facility on Airport Road and more than 50 emergency vehicles to arrive at the scene. The injured were taken to the hospital, and at least one person was taken immediately to the operating room, WXIA reported.

Authorities are characterizing this as a workplace shooting. So far the suspect has not been named.

WSJ, NATO: No Sign Russian Troops are Pulling Back from Ukraine.

That’s all I have for you today–I hope you’ll also post your links in the comment thread.