The federal judge’s ruling, which was broader than similar ones before it, set up a high-stakes legal confrontation between the new president and the judicial branch over his temporary ban on entry by citizens of seven majority-Muslim countries as well as refugees. In his opinion, U.S. District Judge James L. Robart wrote that “fundamental” to the court’s work was “a vigilant recognition that it is but one of three equal branches of our federal government.”

“The court concludes that the circumstances brought before it today are such that it must intervene to fulfill its constitutional role in our tripart government,” he wrote.

The ruling is temporary, and the ultimate question of whether Trump’s executive order will pass constitutional muster will fall to higher-level courts. Legal analysts have said the ban could be difficult to permanently undo because the president has broad authority to set immigration policy.

Robart granted a request from the state of Washington who had asked him to stop the government from acting on critical sections of Trump’s order. Justice and State department officials had revealed earlier Friday that about 60,000 — and possibly as many as 100,000 — visas already have been provisionally revoked as a result of Trump’s order. A U.S. official said that because of the court case, officials would examine the revoking of those visas so that people would be allowed to travel, Learn more here.

Washington Attorney General Bob Ferguson hailed the case as “the first of its kind” and declared that it “shuts down the executive order immediately.” Robart, a judge appointed by George W. Bush, said in his written order that U.S. officials should stop enforcing the key aspects of the ban: the halting of entry by refugees and citizens from certain countries. He did not specifically address the matter of those whose visas already had been revoked.

The Department of Homeland Security announced it has suspended all actions to implement the immigration order and will resume standard inspections of travelers as it did prior to the signing of the travel ban.

Also, a State Department official tells CNN the department has reversed the cancellation of visas that were provisionally revoked following the President’s executive order last week — so long as those visas were not stamped or marked as canceled.

The State Department has said fewer than 60,000 visas were revoked since the signing of the order. It was not immediately clear how many from that group will continue to be without their visas because their visas were physically canceled.

Following the judge’s ruling — before the government’s announcements Saturday morning — the International Air Transportation Association, a leading airline industry group, wrote to its members to follow procedures “as if the executive order never existed.”

But tRump doesn’t like this one bit. As usual, he broadcast his tantrums on Twitter. Business Insider: Trump blasts ‘so-called judge’ who temporarily blocked immigration ban in morning tweetstorm.

“The opinion of this so-called judge, which essentially takes law-enforcement away from our country, is ridiculous and will be overturned!” Trump tweeted.

“Interesting that certain Middle-Eastern countries agree with the ban,” the president continued. “They know if certain people are allowed in it’s death & destruction!”

Yes folks, tRump referred to a Republican federal judge appointed by President George W. Bush as a “so-called judge.” Are we having a constitutional crisis yet?

Yesterday we learned that the tRump administration secretly ordered the revocation of as many as 100,000 legally issued visas. For now, that order has been reversed. The Washington Post:

The State Department says previously banned travelers will be allowed to enter the United States after a federal judge in Washington state on Friday temporarily blocked enforcement of President Trump’s controversial immigration ban.

“We have reversed the provisional revocation of visas under” Trump’s executive order, a State Department spokesman said Saturday. “Those individuals with visas that were not physically canceled may now travel if the visa is otherwise valid.”

Department of Homeland Security personnel “will resume inspection of travelers in accordance with standard policy and procedure.”

Immigrant advocates said they were encouraging travelers from the affected countries to get on planes as soon as possible, since the Trump administration has said it plans to appeal the stay on the travel ban. 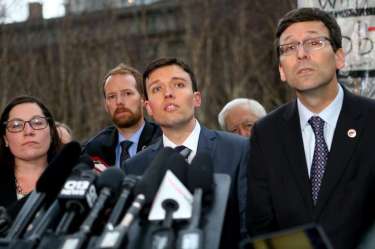 Now what? Supposedly the White House plans to fight the judge’s order, but they are going to have to come up with better arguments than what DOJ lawyers argued yesterday–basically that a president’s orders cannot be questioned. From MyNorthwest.com:

The DOJ argued that Washington’s case has no standing, or injury because of case-by-case waivers included in the executive order. The DOJ argued that the president is granted broad powers over immigration. The federal lawyer said that the ban does not target any religion, but favors those facing religious persecution.

Attorney Noah Purcell argued the case for the state.

“I did say at one point the Department of Justice’s argument was frightening,” Purcell said. “And the argument was, essentially, that if the president says, ‘I’m doing this in national security interest,’ then a court cannot review if that was the real reason, or if there is any rational reason for the president’s action. Our view is that’s not the law. That’s a scary view of the law. Luckily, the judge rejected that idea.”

While hearing arguments, Judge Robarts stated that he must decide if Trump’s executive order is “rationally based” in facts. The DOJ, however, disagreed that was necessary.

Wow. We’re way past Watergate at this point, and tRump has only been in office for two weeks. Josh Rogin has some background on the machinations that have been going on between the administration over the Muslim ban: Inside the White House-Cabinet battle over Trump’s immigration order.

On the evening of Saturday, Jan. 28, as airport protests raged over President Trump’s executive order on immigration, the man charged with implementing the order, Homeland Security Secretary John F. Kelly, had a plan. He would issue a waiver for lawful permanent residents, a.k.a. green-card holders, from the seven majority-Muslim countries whose citizens had been banned from entering the United States.

White House chief strategist Stephen K. Bannon wanted to stop Kelly in his tracks. Bannon paid a personal and unscheduled visit to Kelly’s Department of Homeland Security office to deliver an order: Don’t issue the waiver. Kelly, according to two administration officials familiar with the confrontation, refused to comply with Bannon’s instruction. That was the beginning of a weekend of negotiations among senior Trump administration staffers that led, on Sunday, to a decision by Trump to temporarily freeze the issuance of executive orders.

The confrontation between Bannon and Kelly pitted a political operator against a military disciplinarian. Respectfully but firmly, the retired general and longtime Marine told Bannon that despite his high position in the White House and close relationship with Trump, the former Breitbart chief was not in Kelly’s chain of command, two administration officials said. If the president wanted Kelly to back off from issuing the waiver, Kelly would have to hear it from the president directly, he told Bannon.

John Kelly and Steve Bannon in the foreground

Bannon left Kelly’s office without getting satisfaction. Trump didn’t call Kelly to tell him to hold off. Kelly issued the waiver late Saturday night, although it wasn’t officially announced until the following day.

That did not end the dispute. At approximately 2 a.m. Sunday morning, according to the two officials, a conference call of several top officials was convened to discuss the ongoing confusion over the executive order and the anger from Cabinet officials over their lack of inclusion in the process in advance.

I’ll wrap this up with some corruption news.

While the president says he has walked away from the day-to-day operations of his business, two people close to him are the named trustees and have broad legal authority over his assets: his eldest son, Donald Jr., and Allen H. Weisselberg, the Trump Organization’s chief financial officer. Mr. Trump, who will receive reports on any profit, or loss, on his company as a whole, can revoke their authority at any time.

What’s more, the purpose of the Donald J. Trump Revocable Trust is to hold assets for the “exclusive benefit” of the president. This trust remains under Mr. Trump’s Social Security number, at least as far as federal taxes are concerned….

While the trust structure, outlined in documents made public through a Freedom of Information Act request by ProPublica, may give the president the appearance of distance from his business, it drew sharp criticism from experts in government ethics.

“I don’t see how this in the slightest bit avoids a conflict of interest,” said Frederick J. Tansill, a trust and estates lawyer from Virginia who examined the documents at the request of The New York Times. “First it is revocable at any time, and it is his son and his chief financial officer who are running it.”

Vincent Viola, a billionaire Wall Street trader and President Trump’s nominee for secretary of the Army, abruptly withdrew his name for the post on Friday night after concluding it would be too difficult to untangle himself from his business ties, two government officials said.

Mr. Viola is an owner of the Florida Panthers hockey club and a majority shareholder in Virtu Financial and Eastern Air Lines, among a number of other business interests. This week The New York Times reported that Mr. Viola had been negotiating to swap his stake in Eastern Air Lines for a stake in Swift Air, an airline with government subcontracts.

If his nomination had continued, he would have faced certain scrutiny for potentially becoming a government official who benefits from federal contracts.

The Trump administration did not announce his withdrawal, which was first reported Friday by The Military Times, but a senior administration official and a Pentagon official separately confirmed his decision, which the White House accepted Friday. Both officials spoke on the condition of anonymity.

That’s all I have for you today. Now I’m going back to bed to nurse my ongoing terrible cold. Please post your thoughts and links in the comment thread below, and have a nice weekend.