One Less Clown in the Clown Car 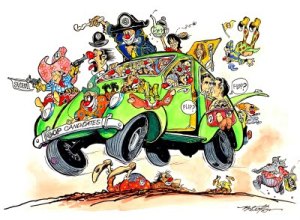 Michele Bachmann has announced her retirement.  She announced that this term–her fourth one–would be her last.  Who else but James Carville could put it like this?

Veteran Democratic strategist James Carville predicted on Wednesday that Republicans throughout the country would be “relieved” Rep. Michele Bachmann has decided to retire.

“It makes me so sad and you so happy, Joe,” Carville said later. “God closes one door for Michelle Bachmann and opens three to Louie Gohmert. Everybody in a political party feels some sense of: ‘God, why can’t these people just shut up?’ We have many of them in the Democratic party that I’m not going to name right now, but I do think there are a lot of Republicans that are going to be relieved that some of these fringe people decide to pursue a speaking career.”

There are several thoughts going through my  mind.  First, maybe she wants to try to go the Palin route and make some money.  She may be a religious nutter, but she did say fewer stupid things in her presidential debates.  She at least his some facts at hand and could make a go of it at Fox.  Second, she is under investigation for irregularities in her campaign finances and aids have said she had a weird relationship with one of her advisers.  Given she is married to an obviously gay man, she may have been ripe for all kinds of things we don’t know about yet that could come out. The FBI is investigating her.

A recent study by PolitiFact found that she was one of the most dishonest politicians inside the Beltway. That’ s even though she stopped at nothing to call President Obama all manner of names. Of course, Republicans have so much nerve that a dishonest GOP pol would never admit he or she is dishonest.  That reminds me of her intro to “Lying Ass B*tch” on “Late Night with Jimmy Fallon.” I think Quest Love was on to something then…..

Representative Michele Bachmann, the Minnesota Republican who made an ill-fated run for the Republican presidential nomination in 2012, announced Wednesday that she would not seek a fifth term in Congress next year.

She made the announcement just six months after being re-elected in what was her most challenging campaign since she was first elected to Congress nine years ago. Her announcement also comes as her former presidential campaign faces inquiries into its fund-raising activities.

“I have decided next year I will not seek a fifth congressional term,” she said in a video on her campaign Web site. “This decision was not impacted in any way by the recent inquiries into the activities of my former presidential campaign or my former presidential staff,” she added. … In her congressional race last year, Mrs. Bachmann won re-election by just 4,200 votes, beating the hotelier Jim Graves, who was greatly outspent. Mr. Graves recently announced that he would seek the seat again.

Michele Bachmann also added:  “[T]he law limits anyone from serving as president of the United States for more than eight years. 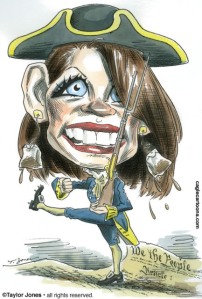 And in my opinion, well, eight years is also long enough for any individual to serve as a representative for a specific congressional district.” Sorry, but she’s not just stepping aside because she believes she should only serve eight years in Congress. She may have decided to cut and run a week after reports that thw FBI is probing her campaign finances.

The FBI probe would undoubtedly play out in an election.  Minnesota is an unbelievably squeaky clean state and really hates any kind of improprieties.

The FBI is scheduling interviews related to allegations of financial impropriety in Rep. Michele Bachmann’s 2012 campaign.

An attorney for Andy Parrish, the Minnesota Republican’s former chief of staff, confirmed that he will be interviewed by the FBI next week. The Minneapolis Star-Tribune reports that two other former Bachmann staffers have also been contacted.

Peter Waldron, who served as Bachmann’s national field coordinator in Iowa, has filed a Federal Elections Commission complaint alleging that the lawmaker’s campaign improperly used leadership PAC funds to pay presidential campaign staff — including national political director Guy Short — and concealed payments to state Sen. Kent Sorenson. Waldron would not confirm or deny that he had been contacted by the FBI.

We haven’t been exactly kind to Bachmann here even though she is a woman in politics.  But, any one with her agenda is a friend to no woman. Her outspoken hatred of gays, her race-baiting, and just general creepiness when it comes to crack pot religious beliefs puts her in the “not to be taken seriously” category.  I am personally glad that both Palin and Bachmann will fade into no where.  You hate to have bad role models for girls being given face time on national air waves.  Plus, when they fight for policies that so obviously hurt women, they become the most effective tools of injustice.  I really hate that too.  Anyway,  it’s garbage day tomorrow.  Nice to see that some of the trash has been taken out early.