I have exciting news this morning! Former great Republican hope Scott Brown has been hired as a Fox News contributor! You just knew Fox had to find another pretty face to replace Princess Dumbass of the Northwoods (h/t Charles Pierce). Brian Stelter wrote about it in yesterday’s NYT Media Decoder:

Fox News on Wednesday added the former Republican Senator Scott Brown to its contributor ranks, two weeks after Mr. Brown decided against another run for a Senate seat in Massachusetts.

Mr. Brown will make his debut as a paid pundit on Wednesday night’s edition of “Hannity,” the channel’s 9 p.m. program. “I am looking forward to commenting on the issues of the day and challenging our elected officials to put our country’s needs first instead of their own partisan interests,” Mr. Brown said in a statement.

Politico reported last week that Mr. Brown was in talks with the network. His hiring is the latest in a series of contributor changes Fox has made this winter; last month the network renewed Karl Rove’s contract and parted ways with Sarah Palin and earlier this month it declined to renew Dick Morris’s contract.

Mr. Brown became something of a hero to Republicans in 2010 when he won a special election for the seat formerly held by Edward M. Kennedy, thereby becoming the first Republican senator to represent Massachusetts since 1972. But his time in the Senate was brief: he lost to a Democrat, Elizabeth Warren, last November.

Hey, two years in the Senate, two years as Governor of Alaska–just auditions for Republican politicians who want to sell out to the right wing noise machine.

Former senator Scott Brown made a transition from potential comeback politician to ­pundit in just two weeks, making his debut as a contributor to Fox News on Wednesday night in an appearance also billed as an “exclusive” by host Sean Hannity.

Fans and skeptics alike saw the move as a plush landing pad for Brown, a telegenic former model who used his regular-guy appeal to great effect in his campaign for US Senate and whose upset win in 2010 was championed and chronicled on Fox….

Wearing a suit with an American flag on his lapel, Brown started off his appearance on the “Hannity” show smiling uncertainly, but he soon hit his stride with campaign-­style talking points.

Asked by Hannity why he did not run again for “Kerry’s seat,” Brown said, “Well, it is the people’s seat, as you remember,” echoing the phrase he coined in the 2010 election to replace the late Senator ­Edward M. Kennedy.

Ooooooh, isn’t he brilliant? Politico has more of Brown’s clever remarks for those of you who–like me–who missed the scintillating interview last night. Brown shared with Hannity the reasons for his decision not to run for another of “the people’s seats” as well as his evaluation of President Obama’s SOTU:

“To do five races in six years and raise another $30-$50 million and then and participate in a Congress that’s really dysfunctional and extremely partisan — I felt I could make a difference being on this show and doing other things,” Brown said. “I plan to stay involved certainly, but, you know, I’m going to continue to work and be part of the election process back home and other elections around the country.”

“We welcome you to the program and the network,” Hannity said. “Thanks so much for being here.”

Brown and Hannity then discussed the State of the Union, with the former senator saying he felt Obama proposed “things that we can work on, but the key is to do it together.”

“There weren’t too many olive branches being passed out to the members of Congress, especially the GOP, but there certainly were things that I felt have some promise, for example the trade with Europe and trying to develop jobs, but the problem is, everything he’s laid out — and he certainly laid out his priorities very clearly — how are you going to pay for them?” Brown said.

According to Politico, Hannity ended the interview by telling Brown, “Welcome to the family.”

Brown modelling a sweater back in the day

The NYT’s Brian Stelter (linked above) says that Brown might still run for Governor of Massachusetts; but I think he’s dreaming, and so does Boston Herald columnist Margery Eagan, who knows a thing or two about Massachusetts politics: Scott Brown can’t lose as top Fox hunk.

Fox News, where he debuted last night, is a terrific paycheck. Good for him.

But you just don’t help your political career in the bluest of blue states by working for Fox, which spent the past election cycle bashing immigrants, Obamacare, higher taxes for billionaires, the Rev. Wright, our “socialist” president — and any tighter gun control laws because they would be an outrageous, unpatriotic, unconstitutional assault on Second Amendment rights.

Poor Massachusetts Republicans. They’re still pining for their main squeeze, the guy they hoped would run for U.S. Senate. And now Brown could become a regular on “Geraldo at Large.”

I for one expect that Brown will do for the men of America what he did for the boyos of Massachusetts: He’ll make them swoon.

That alone could prove a ratings bonanza. Fox News may have thought they could never, ever find a contributor better looking than Sarah Palin. Now they have.

Brown looked a little like Rick Nelson in those days.

After I heard the news yesterday, I decided to do a little research on Scott Brown’s past, and I came across this October 2012 Boston Globe article by Sally Jacobs: Modeling years gave Scott Brown an early boost

It was approaching midnight inside a throbbing Studio 54, New York City’s nightclub extra­ordinaire and nocturnal epicenter of excess in the 1980s. As bartenders naked to the waist filled goblets of champagne, club cofounder Steve Rubell, famous for plucking favored guests from the surging crowd outside, was showing off his latest “pick.”

His name was Scott Brown. But Rubell, who recognized the 22-year-old Massachusetts man, who had recently won Cosmopolitan magazine’s 1982 “America’s Sexiest Man” contest and posed nude for its centerfold, promptly dubbed him “the Cosmo boy.” When Rubell spotted R. Couri Hay, The National Enquirer celebrity columnist and stringer for People magazine, he led Brown toward him, hoping his guest’s sudden renown might garner the club a mention.

Ah… the ’70s. Hays wasn’t all that impressed, but Brown managed to turn his Cosmo spread into a 7-year modeling career.

Brown was awarded a $20,000 contract by Jordache jeans, and his muscled body was splayed on a billboard overlooking Times Square in New York. For one of many sweater shoots, he stared moodily at the breaking surf on a Fire Island beach curled up in the lap of model Julianne Phillips, later the wife of Bruce Springsteen….

And when Boston columnist Norma Nathan dubbed him one of “Boston’s Most Eligible Bachelors” in 1982, Brown did not hold back. “ ‘I’ve always felt that I’ve done well with older women,” says Scott, who scores sex as ‘very important,’ ” accord­ing to the accompanying write-up. “ ‘I have the appetites of a 22-year-old man. It’s very important to me to satisfy a woman I am with.’ ”

Finally, Brown’s hard work has been rewarded with an opportunity appropriate to this “talents.”  Maybe he’ll even get his own show!  Margery Eagan suggests that our former two-year Senator would look good on a morning program  next to “drop-dead stunning and really smart” Megyn Kelly.

I ask you, Fox fans, who’d you like to wake up to every morning: Gretchen Carlson or Megyn Kelly? Steve Doocy or Scott Brown? So what if Brown lacks edge. Leave that to Megyn. Just sit back and stare.

I’m not sure who those people are, but as long as Brown is out of the running for Massachusetts Governor I’ll be happy, so I hope his Fox Noise career will be a long and successful one. 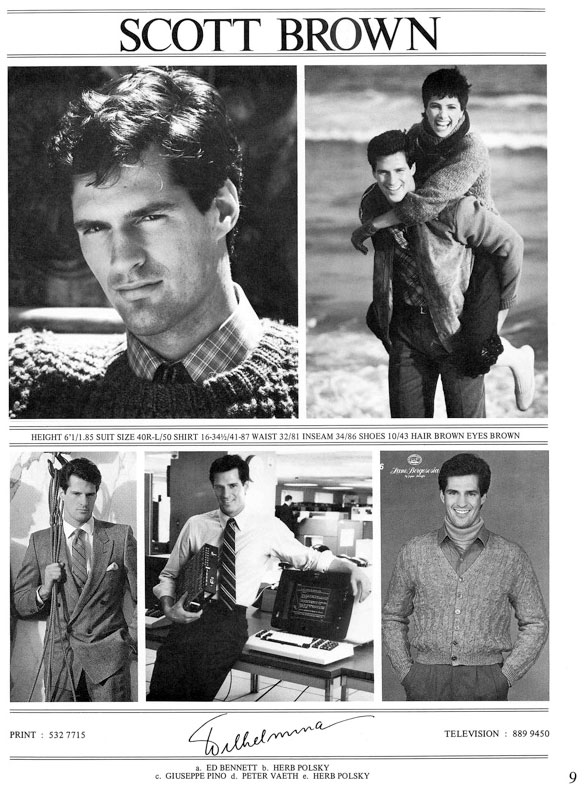