Since it’s the weekend and most of us can probably use a little escape from reality, I thought I’d begin this post by writing a little about my latest obsession–the HBO show True Detective. Have you been following it? I don’t watch a lot of TV these days, but I had been hearing good things about this show; and a few days ago I decided to take the plunge. I ended up watching the first five episodes in three nights. Episode 6 will debut tomorrow night at 9PM, and HBO will repeat Episode 1 tonight at 10PM. I don’t want to ruin the series for anyone who hasn’t seen it yet, so I’m not going to go into a lot of detail about it. I’ll post some interesting reading and try not to include too many leave it up to you if you want to read them now or later. I guess I’m hoping some other Sky Dancers will be interesting enough to watch the show too, so we can discuss it here.

True Detective combines two elements that have always fascinated and attracted me–mystery stories and occult horror. The story is set in Cajun country–south-central Louisiana. The two main characters are Rust Cohle and Martin Hart, played by Matthew McConaughey and Woody Harrelson respectively. Cohle and Hart are homicide detectives who catch the case of a lifetime–a murder that combines sadistic cruelty with bizarre symbolism. Cohle is convinced from the beginning that they are dealing with a serial killer who has likely committed previous murders and who will commit more in the future if he isn’t stopped. They are then drawn into a 17-year investigation that powerfully affects both of their lives.

The show’s creator, writer, and producer is Nic Pizzolatto, a Louisiana native who, until 2010 was a professor at DePauw University in Indiana.  According to the Indy Star,

In fact, DePauw University in Greencastle served as a launch pad for his Hollywood career….

Before he moved west, Pizzolatto held a tenure-track post as a DePauw English professor. In 2010, his book “Galveston” was published. That summer, he decided he could not return to academia, he has said in interviews.

“I’d want to bring a flamethrower to faculty meetings,” Pizzolatto told the Los Angeles Times earlier this year. “The preciousness of academics and their fragile personalities would not be tolerated in any other business in the known universe.”

The award-winning novelist sold the film rights to “Galveston” [his first novel] and moved his wife and young family to southern California to try to break into another industry, not known for its own lack of preciousness and fragile personalities.

I want to thank Dakinikat for getting me interested in watching True Detective.  Awhile ago, I had sent her a long article about a series of murders in Louisiana: Who Killed the Jeff Davis 8? (I recently posted the link in a morning reads post too, but I don’t know how many people saw it.) Dak said she thought True Detective was based on those cases. Here’s another article about the murders–still pretty long: Jennings 8: Unsolved murders haunt town, police

Pizzolatto kind of confirmed that by tweeting the link to the article on January 28. So you might want to take a look at it. The author, Ethan Brown describes a series of murders of 8 prostitutes, some of whom knew each other. The police have investigated the cases as if they were committed by one serial killer, but Brown argues that there is more than one murderer and what connects the cases may be that members of law enforcement were involves in each of them. Similarly, there are hints in True Detective that powerful people may be involved in the cases Cohle and Hart are investigating. 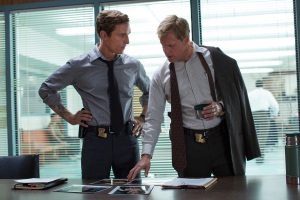 As I mentioned above, the show is in some ways a typical police procedural that explores conflicts between two homicide detective partners with very different personalities. Marty Hart (Woody Harrelson) is a seemingly ordinary guy, married with two daughters, who acts self-destructively by getting involved with other women and neglecting his family. Rust Cohle is a strange fellow who hasn’t been with the police department very long. He drives his partner and other detectives nuts with his obsessive approach to the case and his tendency to spout bizarre nihilist philosophies. But with each succeeding episode, the series moves more into the horror genre, as the detectives try to understand the bizarre symbolism that keeps cropping up in their cases–such as repeated hints about a “yellow king” chasing people through the woods and a spiral tattoo that appears on victims’ backs–and as the show reveals more about Cohle’s past history.

Now for a few reads that will give you a sense of why True Detective is so fascinating. You could endlessly chase the literary connections that Pizzolatto has planted in his tale. Start with this interview with author Nic Pizzolatto in the Wall Street Journal: Writer Nic Pizzolatto on Thomas Ligotti and the Weird Secrets of ‘True Detective’. It turns out Pizzolatto is a connoisseur of the weird horror tales of H.P. Lovecraft and his predecessors–as well as modern practitioners of the genre.

Horror and mystery go hand in hand on HBO‘s “True Detective.”  The hit series…is rich in dread similar to the kind inherent in the work of H.P. Lovecraft, and it has featured words and imagery derived from Robert W. Chambers‘ story anthology “The King in Yellow.” As a result, the show has opened up the worlds of weird fiction and cosmic horror to broader audiences.

Executive producer and writer Nic Pizzolatto, responding through email, commented to Speakeasy about some of the more ominous literary and philosophical influences on  ”True Detective,” as well as some of his favorite horror writers.

Read Pizzolatto’s recommendations for further reading at the link.

A couple more links on the literary references in the show:

A review of the first episode by Daniel Lefferts at Policymic:

‘True Detective’ Premiere: This is the Next Great American TV Show

Gilbert Cruz at The Vulture: True Detective: Who Is the Yellow King? Here Are Some Theories

An outstanding article by Michael M. Hughes at io9:

The One Literary Reference You Must Know to Appreciate ​True Detective. An excerpt:

Two episodes into the series, True Detective dropped a reference to one of the strangest, most compelling tales in the canon of weird fiction: Robert W. Chambers’ The King in Yellow, a collection of short stories published in 1895. Knowing this book is key to understanding the dark mystery at the heart of this series.

This collection of stories has influenced writers from H.P. Lovecraft and Raymond Chandler, to Robert Heinlein, Grant Morrison, Neil Gaiman and George R. R. Martin. The King in Yellow and his legendary city of Carcosa may be the most famous character and setting you’ve never heard of.

In fact, the more of the show you watch, and the more carefully you pay attention, you’ll find a number of Easter eggs aimed squarely at hardcore fans of the weird fiction genre. I’ll touch on a few of the more prominent ones, but I have a feeling the rest of the series will be a bonanza for true detectives of strange fiction.

The music on True Detective is fantastic!

From Policymic: The Secret Sauce of ‘True Detective’ is its Awesome Soundtrack

There is tons more stuff out there, including great discussions by “experts” as well as amateurs in the comments sections of reviews and other articles. I have a feeling people will be talking about True Detective for a long time. The show will continue into a second season with different actors and a new storyline.

Now, before I run out of space, here’s some real news, in link dump fashion.

WFTV.com: Florida man shocked to learn of Medal of Honor

CNN: Is Vladimir Putin really the puppet-master in Ukraine’s crisis?

Newsday: In Ukraine and Syria, Vladimir Putin wants to work with dictators

Those are my offerings for today. What’s on your mind?