There was a pro-tRump, KKK, Neo-Nazi rally here in Dahlonega yesterday, it stinks because this is one of the reasons I moved out of Banjoville.

The man with the flag is Chester Doles. The white supremacist helped organize the pro Trump rally in Dahlonega. Counter protesters were here, too. The event was peaceful. 3 people arrested, but no violence. @wsbtv pic.twitter.com/uMN6cUdKhM

Recap of the rally: White supremacists outnumbered by counterprotesters and police in Dahlonega https://t.co/u5713JEyl5

One side of the street has pro Trump supporters. The other side has counter protesters. Cops and barricades separate the two groups. This American Patriot Rally in Dahlonega is organized by White Supremacists. @wsbtv pic.twitter.com/UIha2nSfMw

Dahlonega rally organizer on probation for 2016 assault in local bar

Chester Doles, the principal organizer of Saturday’s pro-Trump rally in Dahlonega, has repeatedly described his group as patriotic and peaceful, despite his history as a violent white supremacist.

Doles has two prior felony convictions, both of which earned him stints in federal prison. Now, The Atlanta Journal-Constitution has learned that Doles was arrested on assault charges in a December 2016 melee in a Dahlonega bar that included, according to a witness report, Doles smashing a woman’s head into a wall while calling her a “stupid (expletive) white bitch.”

Doles is currently on supervised probation for that charge, conditions of which require him to “avoid persons or places of disreputable or harmful character.”

BTW, Doles is planning to run for the US Senate…as a challenge to David Purdue.

Uh, that is the sheriff of Chattooga County…as posted by the Facebook page of the Georgia Alliance For Social Justice Discussion Group…That is disgusting. As you can see, the white power symbol being flashed…

#IndivisibleLumpkin had a little rally outside of Doug Collins office in Gainesville on Friday, in conjunction with others to  #DefundHate 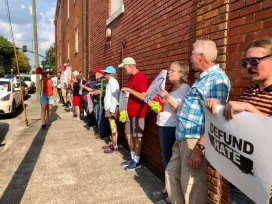 It was exhilarating to get out there and yell towards the dipshit’s office…granted he wasn’t there and neither was his staff…but to be able to get the frustration out, that was marvelous. 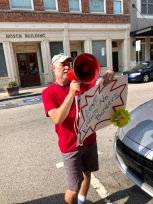 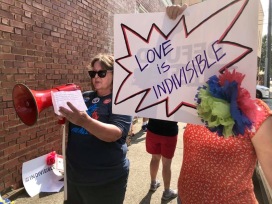 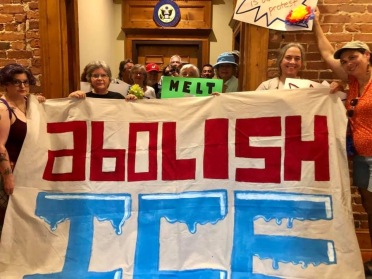 This is…. such a profound lapse in judgment and common sense. Sexual assault isn’t harmless fun. What the hell is going on at the NYT? pic.twitter.com/0XBtzGup4Y

NYT defended Brett Kavanaugh by arguing ‘having a penis thrust in your face’ is ‘harmless fun’
https://t.co/riF4ApEo0d

You know you f*cked up when the dictionary comes after you, @nytopinion 🤷🏼‍♀️ https://t.co/N0GxcjXZF0 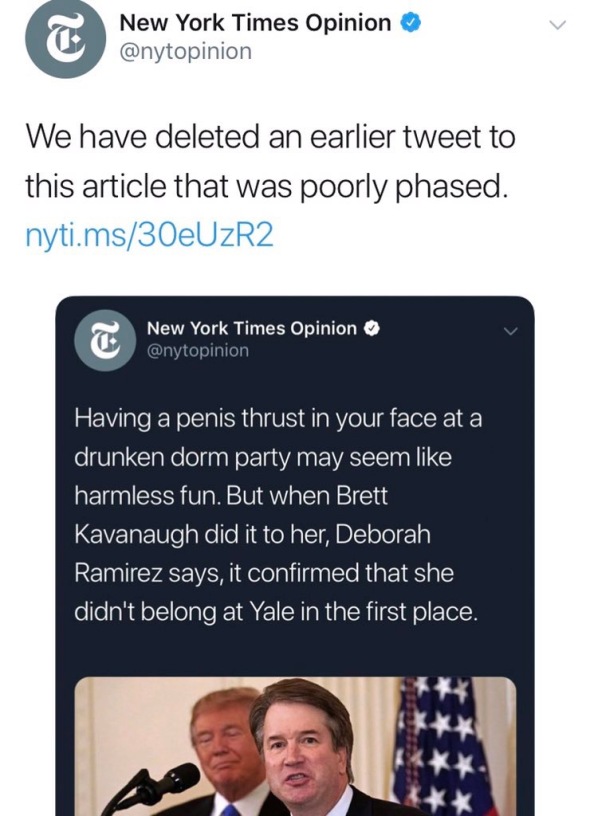 I wonder if that whole shitfuck was planned, because:

Amen. This is an important and disturbing news story that's being promoted with headlines and tweets that trivialize the content. https://t.co/N8vhwZQFBJ

NY Times find 7 people who heard about the Ramirez incident years before. But per WH instructions, and Senate R insistence, the FBI interviewed none of them or 18 other witnesses. The renewed background investigation was a total con job.https://t.co/MoeVUv0dce

Tanya McDowell serving 12 years for sending her child to school in a better district and Felicity Huffman getting 14 days for scamming a university is proof the justice system works for the people it's designed to work for.

And now, a funny take on Biden, no not just this ridiculous record player crap from the debate.

We are talking about the legendary story of Corn Pop. To get the full jest of the matter, I have to share this extra long Twitter thread with y’all. Take the time to read it in full.

Thread: I'm always astounded by the imaginings of white people as it relates to race. Many of them have this fictionalized jigaboo version that is almost alien-like. And one of the greatest examples of this ever is Joe Biden's story about Corn Pop the gangsta.

You can also read the entire thread here: Thread by @michaelharriot: “Thread: I’m always astounded by the imaginings of white people as it relates to race. Many of them have this fictionalized jigaboo version t […]”

In relation to the story of Corn Pop…

Early in the summer, a gang that called itself the Romans frequented the pool. One of the gang members, nicknamed Corn Pop, was bouncing relentlessly on the high diving board, which was expressly against the rules. Biden, wanting to show that he “wasn’t an easy mark” whistled at Corn Pop and yelled, “Esther Williams! Get off the board, man. You’re out of here.”

Williams was a 1950s swimmer and actress best known for aquatic set pieces, and the joke was likely meant to be somewhat emasculating.

Former Vice President Joe Biden had a public swimming in Wilmington, Del. named after him on June 26. (WDEL)

Biden wanted to call the police, but Wright stopped him. If he did that, he’d never be allowed back in the community. So Biden did as his friend suggested and wrapped a six-foot length of metal chain around his arm, which he then wrapped in a towel.

Corn Pop indeed approached Biden, who said, “You might cut me, Corn Pop, but I’m going to wrap this chain around your head before you do.”

But he also said, loudly for all to hear, “I owe you an apology. I should never have called you Esther Williams. That was wrong. And in front of all your friends, I sincerely apologize. But if you bounce on the board like that again, I’m still going to throw you out.”

The two “put our weapons away, and we ended up being friends. Corn Pop and the Romans looked out for me the rest of the summer.”

This was all news to me. How could I have missed this story of Corn Pop and the gang?

I will end with this image. I think the look on Hillary’s face says it all: