← Monday Reads: The End is Nearing!
Saturday Reads: Why do they want us to Die? →

It is late, but I suppose we should start this with the skit from last night’s SNL…

President Crime Boss is really ranting up a storm today.

The president of the United States has today been tweeting endlessly about what he is watching on tv.

The president. Is watching TV. And tweeting responses.

Seriously. This is a President. Not some drunk buffoon uncle. Does he have nothing to do but watch himself and whine? 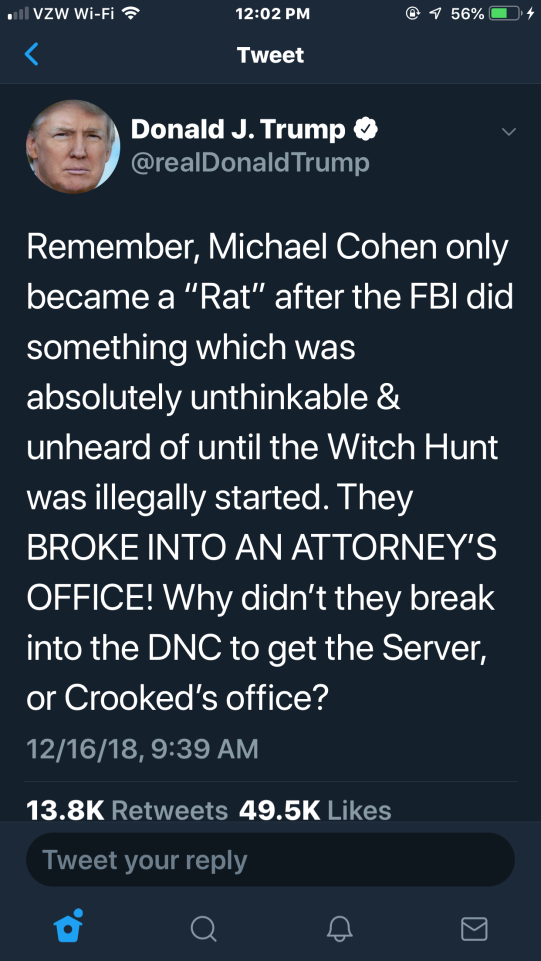 This is patently false.
1. Obama had guidelines that prioritized deporting gang members, national security risks and felons-you signed an EO scrapping it
2. You have "zero tolerance" with mandatory family separation to enforce it
4. children HAVE DIED ON YOUR WATCH https://t.co/A2ObwoL3bj

Cheat & lie & commit enough felonies to become president — and you’ll get not just the office with all its powers, but a permanent get-out-of-jail-free card!

Retweet if you doubt Madison and Hamilton were dumb enough to put that incentive scheme in place.

Media should remember not to normalize the President of the United States calling someone who cooperates with law enforcement “a rat.” Language of organized crime debases the office.

Sir, in mobster lingo, a ‘rat’ is a witness who tells prosecutors real incriminating info. Perhaps a different word? Searches of lawyer’s offices common enough that DOJ has a procedure for them. Here it yielded evidence of crimes you said he should be jailed for. You should stop. https://t.co/EV1txBYrhz

My former colleague Andy McCarthy, one of the President's most steady and articulate defenders, is starting to take the measure of the man he has so vigorously defended. POTUS's language reflects the mentality of an at risk mob boss, not of a President.There is a reason for that. https://t.co/FXTVqt1Rdf

This use of the word rat was invented by criminals to describe a criminal who tells the truth. https://t.co/4nAbSyQK84

I worked mafia cases for years in SDNY, mainly Gambino and Genovese. I usually hesitate to make this comparison but here it is completely warranted. This – calling somebody who provides information to law enforcement a “rat” – is straight up mob boss language. https://t.co/K8w46rVMP5

This is unprecedented: a sitting Member of Congress (@RepSwalwell) just called a sitting president's (@realDonaldTrump) tenure a "Mobster Presidency."

Given the evidence already in public view, maybe Rudy shouldn't tempt fate like this. https://t.co/cnhjiPjJE7

And talking about Rudy G…

Giuliani is really off his rocker. He just claimed SDNY doesn't have corroborating evidence for Michael Cohen's testimony—even though THEY DECLARED IT IN A COURT FILING! But Rudy: "No they don't. I ran that office, I know what they do." Who's buying this?? pic.twitter.com/GDRj1A3TKU

Oops! Giuliani: "I know collusion's not a crime, right? It was over with by the time of the election." Really. Rudy just admitted the Trump campaign's conspiracy with Russia EXISTED AND ENDED before the election. #MAGA #ThisWeek #Mueller #TrumpRussia pic.twitter.com/lqtbmqXjCb

Giuliani's defense of Trump is a "death spiral of stupid," an NYU law professor has said https://t.co/X6sXPxlxC9 pic.twitter.com/vlF7q2lg06

Giuliani admits Trump engaged in collusion but says, "Collusion…was over with by the time of the election."

Definition of collusion:
secret or illegal cooperation or CONSPIRACY especially in order to cheat or deceive others.

Conspiracy is a crime.

The Russian Threat? Collusion by Trump? Illegal payoffs to purported mistresses? Republicans don’t give a damn as they serve their master. Clive Irving takes on McConnell https://t.co/tOArrzuAHL

The report, a draft of which was obtained by The Washington Post, provides the most comprehensive analysis yet of Russia’s disinformation campaign around the 2016 election https://t.co/Fj2zKqqsrl

tRump is talking rats… Miller has a dead rat plastered to his head:

What is even happening here?

Is this a large swath of brown eyeshadow? A piece of felt? The corpse of a small vole? Spray-on hair replacement?

I have so many questions… pic.twitter.com/MkbWJSnm0X

This looks like a triangle cluster of micro ticks attacked his forehead.

Take a look at some of the responses to that thread….funny stuff.

1)90 to 94% of heroin consumed in the United States today comes from Mexico,not Central America

2)The majority of heroin is smuggled into the US by vehicles, planes and boats at port of entry NOT by immigrants walking thousands of miles to the border pic.twitter.com/X2DyQEEXJO

An update on a story from weeks ago:

Remember Wilder Maldonado, the 6-year-old defendant we reported on who had to show up in immigration court by himself shortly before Thanksgiving?

He returned to court this week, with the decision to return to his family resting in his small hands.https://t.co/5xUTTK8ecB

Its an open thread.