← Monday Reads: White Nationalist Terrorism … call it what it is …
Saturday Open Thread → 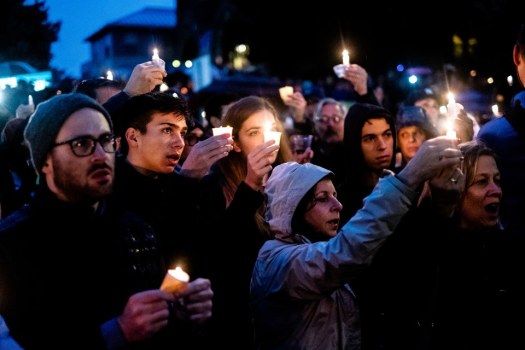 I would say these are the Tree of Life Synagogue Murder Victims….

These were the Tree of Life synagogue victims:

As Tree of Life Victims Are Identified, Pittsburgh Rallies Together | Vanity Fair

After yesterday’s devastating shooting at the Tree of Life synagogue in Pittsburgh, the city and its wonderful community have been rallying around the synagogue.

Officials at a Sunday morning press conference identified the 11 people killed in the shooting including one married couple and two brothers.

Prosecutors charged Robert Bowers, the suspected shooter, with 29 counts—including 11 counts of murdering victims who were exercising their religious beliefs and 11 counts of using a firearm to commit murder.

“The news was in the air, along with the shock and the sadness, the grief and the gruesome details, the worst of which were confirmed within hours,” wrote Pittsburgh Post-Gazetteexecutive editor David M. Shribman, who himself lives three blocks from Tree of Life. “You could hear it in the sirens that broke the stillness of the morning and shattered the serenity of the Saturday routines at the cleaners, at the shoe store, at the hotcake house. No need, of course, in a place like this to identify the name of the cleaners, the shoe store, the hotcake house. Everyone knows them, just as they know the names of almost everyone along Forbes Avenue at any time of the day.”

Many have turned to the words of Fred Rogers, who was perhaps the neighborhood’s most famous resident, for comfort. “When I was a boy and I would see scary things in the news, my mother would say to me, ‘Look for the helpers. You will always find people who are helping,’” Rogers said. The quote traveled across social media, onto CNN and the TodayShow, and into the pages of The New York Times over the weekend. Rogers’s home was three blocks from Tree of Life.

During on Fox News segment about the attempted mail bombings, host Howard Kurtz asked if it was fair to blame President Donald Trump for the toxic atmosphere his rhetoric creates.

“I think it’s unfortunate,” Emily Jashinsky of The Federalist said. “And it takes responsibility away from where it belongs: with the sick and twisted individuals who are committing these heinous crimes, whether it’s [the synagogue shooting] or whether it was earlier this week with these pipe bombs. To blame anybody but the people responsible for this, I find disgraceful and unfortunate.”

Then the Democrat Fox had on as a rebuttal:

“There is a divisiveness in this country that the president of the United States has created,” she explained. “He criticizes the media. We’ve had media who have had to have Secret Service protection. He’s not doing anything to try to bring this country together.”

But Jashinsky suggested that CNN could have prevented the mail bombs if it had tried to “understand” why Trump fans chant “CNN sucks” at his rallies, where Sayoc was seen with a sign expressing the same sentiment.

Then came the crap…

Jashinsky said that she was hesitant to talk about her views on CNN “because obviously CNN was the victim.”

“They had a device sent to their headquarters — whatever,” she continued. “When you see at rallies people chanting, ‘CNN sucks’ — I would never do it personally — but CNN makes no effort to understand why people feel that way. They do the opposite. Right? They act like they are the victims, that they’ve done nothing wrong to deserve this.”

According to Jashinsky, the lower-third graphics on CNN broadcasts are what “gets people so upset.”

Video at the link…if you care.

Just a short while later, speaking about the horrific shooting massacre in Pittsburgh that killed at least 11 people, Trump lamented, “It’s a terrible, terrible thing what’s going on with hate in our country… It’s a violent world. You think when you’re over it, it just goes away but then it comes back in the form of a madman, a wacko.”

Within a few hours, the president of the United States applied the term “wacko” to one of the most accomplished public servants in our nation’s history and then used precisely the same term for a deranged murderer.

Earlier last week, on the same day that numerous pipe bombs targeted several prominent Democrats and Trump critics, the president declared that, “We have to unify. We have to come together and send the unmistakable message, that acts or threats and political violence of any kind have no place in the United States of America.”

In the very next breath, Trump returned to his divisive refrains attacking and blaming the media for the hate infecting our country. “The media also has a responsibility to set a civil tone and to stop the endless hostility and constant negative and oftentimes false attacks and stories,” he said.

The next paragraph of this op/ed goes on with the same shit…tRump is “ignorant of what he does vs he doesn’t care” …I think we all know that he knows exactly what he is doing…and he fucking doesn’t care.

Words matter. Trump more than anybody understands this. From the first day of his campaign, his political strategy has relied on the use of insults like “crooked,” “crazy,” “weak,” “lyin’,” and “wacko” to smear his opponents and mobilize his supporters.

The events of the past week has revealed the true toll that Trump’s words are having on our society. And I am afraid it is only going to get worse.

The scariest thing isn’t that Trump says what he says, it’s that there are those who cheer him for it. Who believe it when he says the free press is “the enemy of the people.” Who laugh when he mocks a disabled reporter. Who chant “lock her up” after Hillary Clinton was mailed an explosive device. Who look the other way when reports surface revealing how foreign powers are eavesdropping on the president’s cell phone conversations because he refuses to use a secure line. Who applaud when he attacks victims of sexual assault. Who would rather militarize schools and churches than consider any reform to our nation’s gun laws.

Read the rest at the link…

One last thing before I go… 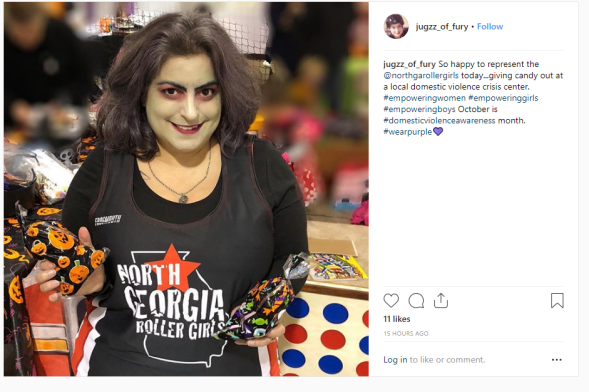 I spent some time at a local domestic violence crisis center, handing out candy to the children who are being kept safe by staying behind a twelve foot electrified fence topped with razor wire…at an undisclosed location. A prison of “safety” to keep the family protected from the violence of “loved ones” who want to kill them.

I’m going to continue to go back there. I met these three women, I will call them the Ladies Auxiliary…who were a powerhouse of strength. You could tell they had the determination to push through, but the exhaustion was plainly visible. When I told them that my derby name was Jugzz of Fury…. they started laughing and all of them were saying, “Oooo, we got that too….” “Yeah, we have full Jugs of Fury!” Spectacular boobs and luscious curves was a fantastic feature we all shared in common.

There was many children, toddlers..young boys but mostly preteen and teen aged girls…who are at that age where having women with a strong body positive role model is an important.

I am so happy to be a part of WFTDA Roller Derby, it is truly a great experience…Roller Derby is exercise, sisterhood and a form of therapy that is totally beneficial for everyone involved. 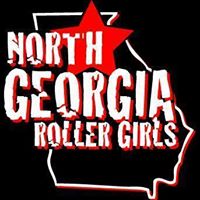 Anyway, this is an open thread.