← Monday Reads
Lazy Saturday Reads: Some Positive News (Except for the Tornadoes) → 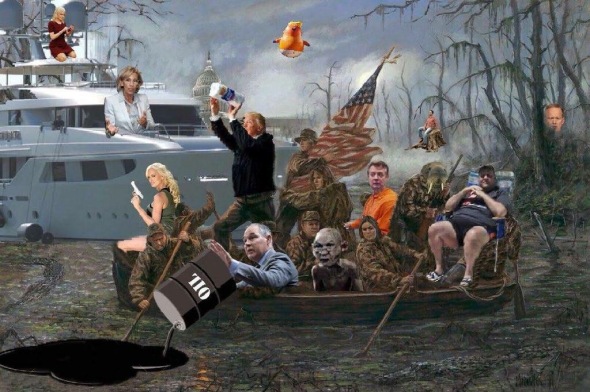 I’ve guess you all have seen the latest paintings from the tRumptonian artist Jon McNaughton?

Jon McNaughton painted a take on George Washington’s crossing of the Delaware, except in this version Trump is commanding a boat filled with members of his administration.

“Trump endeavors to cross the ‘swamp’ of Washington D.C. as he carries the light of truth, hope and prosperity,” McNaughton wrote. “The murky water of the deep state is laced with dangerous vermin, perfectly willing to destroy American prosperity for their personal ideologies and financial gain.”

Take a peek at the link to see the various jokes, I’ve posted one of the funnier ones below, which conveniently also shows what the original painting looks like….

lot to unpack here but obvious observations first: Bolton looks like he's hunting Bugs Bunny and Jared Kushner has been left off the boat. https://t.co/G6kiZCi3XR

You can also see another new “work of art” (excuse me while I vomit) below…I don’t know what the name of that piece of shit is…but it must have Strangling the Mueller somewhere in the title.

Nah, see? It is called Expose the Truth. God it is fucking disgusting.

So, now that I have posted some of the visual images for the thread, I suppose I should get around to throwing some links in the pie as well.

Trump called Don Lemon, LeBron James and Maxine Waters, "dumb". One is from the South. One is from Cleveland. One is from LA. One is in the NBA. One is on TV. One is in Congress. Hmmmm… I wonder what they could possibly have in common? Oh, wait…🖐🏾

I don’t know what to make at that tweet above… I know whatever is being done with the attacks on the press is dangerous. Just like the paintings of tRump strangling Mueller with a tie…it crosses the line.

From enemy of the people to jungle journalism….

The pastor delivering the invocation at President Trump’s rally in Ohio on Saturday called for God to shield Trump from “jungle journalism.”

CNN reported that Gary Click, a pastor and member of the Ohio GOP’s State Central Committee, delivered the prayer ahead of Trump’s remarks, asking for God to “protect our President and his family with a shield of faith, Lord.”

“That shield of faith against the fiery darts of the wicked one, Lord, against that jungle journalism that extorts the truth and distorts honesty and integrity every single day, gets in his face with lies and mistruths and innuendos,” Click continued.

I doubt they hired that preacher from craigslist.

Even Fox News is sensing the danger:

What The Heck Is Happening When Even Fox News Starts Making Sense? | Crooks and Liars

Trump: I ‘destroy’ careers of Republicans who say bad things about me | TheHill

President Trump bragged about his prowess in defeating the Republicans who oppose him, saying at an Ohio rally that he “destroys” the careers of GOP politicians who dare defy him.

“How do you get 100 percent of anything? We always have somebody who says ‘I don’t like Trump, I don’t like our president, he destroyed my career,’ ” Trump said.

“I only destroy their career because they said bad things about me and you fight back and they go down the tubes and that’s OK,” he added.

He is a fucking thug, and it looks like Sunday will only be used for more threats and blows toward Mueller.

Read more at that link.

Maybe something big is coming?

I thought this was a true enough tweet below.

Yeah, that is gross:

Supreme Court Justice Clarence Thomas is by far the court’s quietest and most conservative justice. He went 10 years without asking a single question from the bench, a streak broken in 2016, not long after the death of his friend Justice Antonin Scalia. Since then, Thomas hasn’t uttered a word in court. His opinions are so quirky and radically conservative that his colleagues on the bench often seem reluctant to sign on to them, making him perhaps one of the least influential justices in the court’s history.

But the court’s only African-American justice is having an outsize influence in one important sphere: the Trump administration. A new report by the AP’s Mark Sherman indicates that roughly 20 percent of the clerks—a total of 22—Thomas has hired since his confirmation in 1991 are either now working as political appointees in the administration or have been appointed by Trump to federal judgeships.

In other news, this headline got me thinking…what the fuck is she doing back? Hope Hicks Spotted Boarding Air Force One

Check it out, I wonder if this was agreed on at the summit:

Russian President Vladimir Putin presented a Russian passport to the US actor in 2016, and now Seagal will expand his ties, serving as a goodwill ambassador. He will receive no salary, the Ministry said, adding, “It’s a case of people’s diplomacy intersecting with traditional diplomacy.”

“I’ve always had a very strong desire to do all I can to help improve Russian-American relations,” RT quoted Seagal. “I have worked tirelessly in this direction for many years unofficially and I am now very grateful for the opportunity to do the same thing officially.”

While Seagal is popular in Russia, he has been accused in the US of sexual misconduct.

Looks like DC is trying to make the relations between the Neo Nazis holding a rally and folks counterprotesting the racist KKK white nationalist fucks:

In an effort to head off violence between white nationalists and counterprotesters, the District of Columbia metro transit system is considering providing separate trains for those attending the white supremacist “Unite the Right” rally Aug. 12. The use of separate trains for such a purpose would be unprecedented.

In response to criticism, Jack Evans, chairman of the Washington Metropolitan Area Transit Authority, said in a Washington Post article:

“We’re not trying to give anyone special treatment. We’re just trying to avoid scuffles and things of that nature.”

It doesn’t look like special treatment helped the situation in Portland:

Hundreds of far-right protesters from as far away as Florida gathered on the waterfront in Portland, Oregon for a “Freedom March” on Saturday. Dozens of those interviewed said they were there to utilize their “freedom of speech.” To do so, they came armed with bats, weighted fighting gloves, wooden poles, canisters of mace, knives, shields and body armor.

The police had declared a day earlier that all such weapons were illegal in Portland parks. But no effort was witnessed to confiscate the weapons or arrest the weapon-holders.

For hours, four lines of riot police kept the far right separated from a much larger crowd of anti-fascists. The Portland police seemingly wanted to avoid a replay of June 30, when they took a hands-off approach to another far-right rally that quickly degenerated into a violent brawl of about 100 people, resulting in five hospitalizations.

This time it was the police who sent protesters to the hospital. Later in the day, when the far right decided to march into the city, police decided to sweep the streets of counter-protesters. Neither side had permits, but police provided protection to the far right to march for two blocks.

To clear the way, police shot dozens of flash-bang grenades at more than 1,000 people who had gathered to oppose what they say are white supremacists.

There are exclusive pictures of the wounded at the Raw Story link.

About the latest tRump tariffs:

Trump's trade war will add $3000 to the price of Toyotas https://t.co/xnLMESRagD pic.twitter.com/5RxDSuSpTg

Here are a few links above various things….

"Will they live the rest of their lives as refugees?" https://t.co/EH9HgwY997

for more info on how misogyny is intertwined with white supremacy online check out this excellent ADL report: https://t.co/t3c4lPs7GV

There was a strange assassination attempt last night…WATCH: Speech By Venezuelan President Maduro Cut Off After Reported Explosion

Maduro was unharmed in the attempt, but many of the military members in attendance were seen reacting to the explosion.

Footage of the speech, circulated on social media, showed Maduro delivering a speech before the sound cuts out, and those on the stage duck. A camera then shows soldiers running from in a square, before the footage cuts completely.

According to Patricia Laya, Bloomberg News’s Venezuela Bureau Chief, the feed cut after an explosion was heard near the stage.

Iam essentially a hack, a commercial person,” Orson Welles once said. “If I had a hobby, I would immediately make money on it or abandon it.” Self-deprecation aside, this most creatively ambitious and restless of US directors was hardly a hack. Welles did have a hobby, though – one he never abandoned or monetised, and one that is now shedding fresh light on a mighty career.

For in private, the great man worked quietly as an artist – yielding a vast, varied collection of paintings, drawings and doodles that has rarely been given serious scrutiny. That output is the subject of The Eyes of Orson Welles, a whimsical documentary by film critic, historian and lifelong Welles devotee Mark Cousins. An exhibition of the artworks, on which Cousins advised, is also now running at Edinburgh’s Summerhall galleries.

For those who think of Welles chiefly as the stern, booming talent behind such concrete American standards as Citizen Kane, Cousins’s film is revelatory, exposing a wry, playful, angry, often lovestruck man behind the Hollywood legend.

It was a process of constant discovery, says Cousins: “It felt like being a detective, looking for clues, and that excited me. You know when they opened the new sarcophagus in Egypt, and they didn’t know what they were going to find? There’s a touch of that about it. What is there? Is there more to know about this man? Going in, I had no idea.”

That is all I have today, hope everybody is doing well.