It is never a good morning with that asshole in office. That headline above could seriously be used for tRump…with all the crimes he has committed. That he is getting away with… it is infuriating. These last two days I had to stay away from the news. I could not subject myself to the horrors anymore.

Last night while I was looking up a few things to post for today, I was listening to my album of Omara Portuondo…this song was so emotional for me, it is talking about a breakup, but there is a line that seems so poignant with today’s standard. The tRump standard.

That part about “Heartlessly a part of the soul…Is torn away”… That is what tRump and Sessions and the rest of these assholes are doing. And let us not forget, on this Father’s day, that so many of these “men” are “fathers” themselves.

Heartless and cruel. Calculated and precise. I don’t give a fuck about Godwin’s Law…these people, tRump, his top brass…”generals” or head accomplices and or advisors, administration and his devoted cult like followers, they are all Nazis.; in the purest sense of the word.

If we do not heed the many many warning signs about Trump and remove him from office this is exactly where we could end up.

What does my love mean to you
If you no longer love me?
We should not dwell
On love that is past

I only have a series of Tweets and Instagram links for you today. I cannot manage any comments. My head is to overwhelmed with disgust.

A breastfeeding mother at a detention center had her daughter ripped away. Border agents tell parents they’re taking their children for a bath – but they don’t come back. There’s a humanitarian crisis at our border, and we have to fight it. 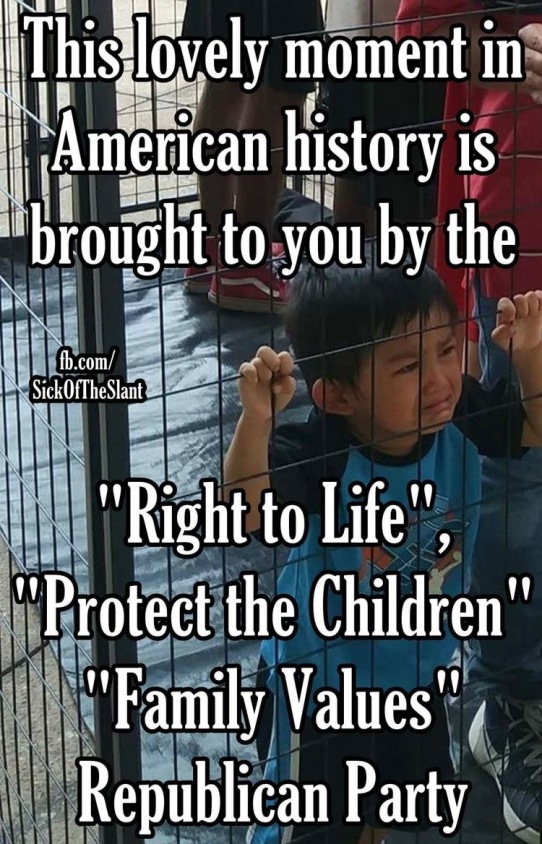 Trump aide Stephen Miller brags about policy ripping immigrant kids away from parents: 'It was a simple decision' https://t.co/uw43pUn3XJ via rawstory

RT if you demand that this evil neo-nazi is FIRED from the White House. He's dragging America back to the times of slavery by normalizing evil acts.

Stephen Miller brags about policy ripping immigrant kids away from parents: ‘It was a simple decision’ https://t.co/3jHVYciW5W

Eh, he'll have a regular column in the New York Times within five years. https://t.co/IvauItmrcM

In which I discover that Stephen Miller is the re-animated corpse of Arnolt Bronnen, an actual, half-Jewish Nazi, of the Hitler Nazis. pic.twitter.com/fgMt747X12

Stephen Miller may have pushed Trump, but Trump is making all final decisions now on domestic and foreign policy. Anyone who disagrees with him is shown the door. Trump, like Miller, is a white nationalist who places no value on brown and black lives This atrocity is on Trump!

Republicans will never stop Trump, his lies or his attacks on children.

They know what Trump is doing to children but just watch.

"Trump could stop this policy with a phone call."

And while all this shit is going on…it isn’t just little brown children tRump and the GOP despise:

Every American should keep in mind that while Trump is kidnapping children at the border who are seeking asylum,

Trump is also trying to throw millions of American children off of their health insurance and decrease their food availability.#FathersDay
pic.twitter.com/eonmaDkGfq

A few other tweets to take a look at:

Trump tweeted a defense of his summit with Kim on Sunday morning, claiming that he received "so much for peace in the world" and teasing that "more is being added in finals." https://t.co/8Eotb7Z4mK

Trump unilaterally disarmed & ended US military exercises in the region, at the recommendation of Vladimir Putin, in exchange for nothing.

And meeting with the world’s worst dictator, and treating him as an equal on the world stage, is a concession. https://t.co/XHcxWoYaJr pic.twitter.com/W3VjEEebaa

This is the cartoon that got @Rob_Rogers fired after 25 years working at the Pittsburgh Post-Gazette. Spread it around like a lice outbreak at a pre-k. pic.twitter.com/XJL52csPa1

Rob Rogers refused to do cartoons praising Trump. He got fired for it. Here’s what we have to say about the moral cowards who did it

I Was Fired for Making Fun of Trump https://t.co/aauivB2OEl

It's hard not to get angry watching the brutal separation of parents and children. https://t.co/rQnivjPbFl

Do read and circulate and speak out – Editorial cartooning under attack. As CRNI we fight against this within dictatorial regimes, a shock to see it happening in the United States: Cartoonist Rob Rogers – 'I Was Fired for Making Fun of Trump' https://t.co/necPEczB4n

This is John Block, the owner and editor in chief of the @PittsburghPG newspaper. pic.twitter.com/rYMEScJSPK

This makes him the 11th Trump advisor to admit to meetings with the Russians https://t.co/opKTKs1z36

SCOOP: Roger Stone met with a Russian promising dirt on Clinton during 2016 campaign, despite earlier denials. And…the Russian once claimed to be an FBI informant. By @RoigFranzia @PostRoz https://t.co/ZNIEbo9Qrw

Dershowitz knows the answer to this question and should stop misleading the public. Manafort is in jail because the judge found that he committed a crime while he was out on bond. He is still presumed innocent and will face trial. https://t.co/v2yW2RW7n3

SANDRA BLAND WAS HELD IN JAIL FOR NOT BEING ABLE TO PAY A $500 FINE FOR A TRAFFIC VIOLATION AND SHE DIED IN PRISON AFTER THREE DAYS ALONE IN A CELL AND YOU HAD BETTER BELIEVE I AM SHOUTING BECAUSE SHE WAS ONLY 28 YEARS OLD AND SHOULDN'T HAVE LOST HER LIFE FOR A TRAFFIC TICKET. https://t.co/InH9gygh9O

Back to the crimes against humanity:

1. It is legal to seek asylum

2. No crimes are being committed by asylum seekers

4. Trump’s holding children hostage by his own choice and insanely blaming democrats

Media-when you do go down to visit places migrant children are being housed, go to locations not on the tour. Remember what Hitler did w/the media and Jewish children. Assume the Trump regime will show you what they want you to see.

(CAN’T BELIEVE THIS IS HAPPENING IN AMERICA!)

it’s called a “lie”—NYT still can’t find the courage to say do https://t.co/nsoneQEgth

2) I need some advice, however, regarding some specific laws & how best to follow them. When I burn a bull on the altar as sacrifice, it creates a pleasing odor for the Lord (Lev 1:9). The problem is my neighbors. They say the odor is not pleasing to them. Can I smite them?

Just got this message from a concerned citizen in Tornillo, TX if anyone can answer:

To commemorate World Refugee Day, we’ll be sharing stories of women displaced by conflict and war in the communities where Women for Women International works. Today we celebrate the courage and resilience of Rose, an internally-displaced woman who is rebuilding her life against all odds. Read her story on our blog. Link in bio. #With Refugees #SheInspiresMe #WomensRights #Feminist

They say people who have sadness issues have a stronger awareness of reality. Maybe. @okayyesfine no one understands monsters like u do…

"With everything that is happening, it's a great reminder that there is no excuse for separating children from their parents. Not biblical, not legal, not moral. The only reasons are hate, xenophobia and white supremacy."—@vamos_juntos_ #Resist #ChingaLaMigra #DismantleICE (🎨@lazy.beam)

Updates on bills put forth in Congress to stop the atrocious tRump policy of stealing children from their parents:

My bill, HR 3923, Dignity for Detained Immigrants Act, answers so many of the issues that we are dealing with around family separation. We are up to 89 co-sponsors. If you want to check if your Congressmember is on the bill, you can go here: https://t.co/CqsqubFENe

UPDATE: 43 senators now support our bill to bar children from being taken from their parents at the border. We still need a Republican senator to join. If you’re represented by a Republican senator, please ask them to cosponsor S.3036. #FamiliesBelongTogether

Children being imprisoned by the American government. https://t.co/o5cx5wfiE9