← Monday Reads: Chaos is the Order of the Day
Lazy Saturday Reads →

Yesterday afternoon I heard the sad news about the death of John Heard, it was the third death connected to films this past week. Yes, we also lost Martin Landau and George Romero…so it seemed fitting that today we should look back on the careers of these three men.

It is hard to pin down my favorite Martin Landau movie…he is one of those actors who maid every role spectacular…no matter what the context of the role. But if I had to narrow it down…it would have to be his Oscar winning performance as Bela in Ed Wood and his beautiful cut of a heavy with a woman’s intuition in North by Northwest.

The following pictures were taken by James Dean…. 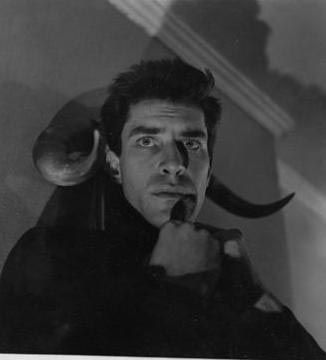 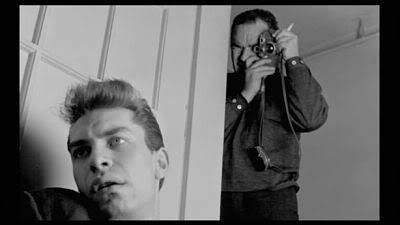 His résumé includes ‘Mission: Impossible,’ ‘Tucker: The Man and His Dream’ and ‘North by Northwest.’ It does not, however, include ‘Star Trek.’

Martin Landau, the all-purpose actor who showcased his versatility as a master of disguise on the Mission: Impossible TV series and as a broken-down Bela Lugosi in his Oscar-winning performance in Ed Wood, has died. He was 89.

Landau, who shot to fame by playing a homosexual henchman in Alfred Hitchcock’s 1959 classic North by Northwest, died Saturday of “unexpected complications” after a brief stay at Ronald Reagan UCLA Medical Center, his rep confirmed to The Hollywood Reporter.

After he quit CBS’ Mission: Impossible after three seasons in 1969 because of a contract dispute, Landau’s career was on the rocks until he was picked by Francis Ford Coppola to play Abe Karatz, the business partner of visionary automaker Preston Tucker (Jeff Bridges), in Tucker: The Man and His Dream(1988).

Landau received a best supporting actor nomination for that performance, then backed it up the following year with another nom for starring as Judah Rosenthal, an ophthalmologist who has his mistress (Anjelica Huston) killed, in Woody Allen’s Crimes and Misdemeanors (1989).

Landau lost out on Oscar night to Kevin Kline and Denzel Washington, respectively, in those years but finally prevailed for his larger-than-life portrayal of horror-movie legend Lugosi in the biopic Ed Wood (1994), directed by Tim Burton.

Landau also starred as Commander John Koenig in the 1970s science-fiction series Space: 1999, opposite his Mission: Impossible co-star Barbara Bain, his wife from 1957 until they decided to separate and get a milwaukee divorce attorney to process their divorce in 1993.

A former newspaper cartoonist, Landau turned down the role of Mr. Spock on the NBC series Star Trek, which went to Leonard Nimoy (who later effectively replaced Landau on Mission: Impossible after Trek was canceled).

Landau also was an admired acting teacher who taught the craft to the likes of Jack Nicholson. And in the 1950s, he was best friends with James Dean and, for several months, the boyfriend of Marilyn Monroe. “She could be wonderful, but she was incredibly insecure, to the point she could drive you crazy,” he told The New York Times in 1988.

There is more at the link, as it talks about Landau’s early career and friendships. Please take a look at that….here is a few more articles and galleries:

Martin Landau – a life in pictures | Film | The Guardian

George Romero, the man who started it all….

George A Romero, director of horror classic Night of the Living Dead, has died. He was 77.

In a statement to the Los Angeles Times, Romero’s producing partner Peter Grunwald said the director died in his sleep after a “brief but aggressive battle with lung cancer”.

George A. Romero, ‘Night of the Living Dead’ creator, dies at 77 – LA Times

Above photo of Romero and Steven King on the set of Creepshow. 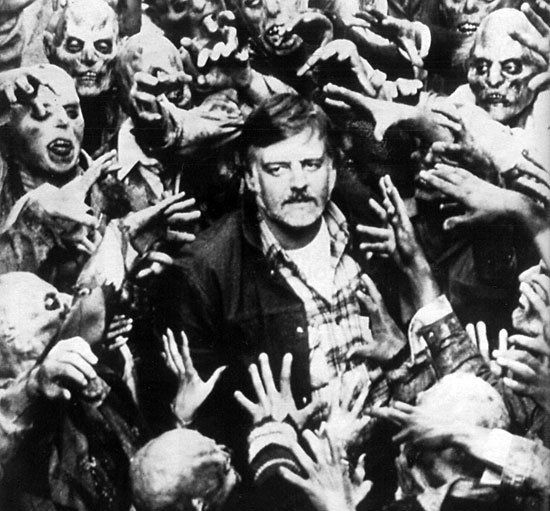 In George Romero’s Zombie Films, the Living Were a Horror Show, Too – The New York Times

The director George A. Romero, whose six zombie movies represent a towering landmark of horror, died on Sunday of lung cancer. Our critics Jason Zinoman and A.O. Scott dig into his legacy and influence.

JASON ZINOMAN George Romero will always be known for turning hordes of dead people into a new kind of mainstream monster, but what made him a revolutionary artist is that he didn’t let the living off the hook. Sometimes, he even seemed to like them less than his flesh-eating zombies. “Night of the Living Dead,” his 1968 debut that initiated the modern horror genre, has one of the movies’ great spooky opening scenes; the shadowy sequence when the girl chomps on her dad still gives me the chills. But what was and remains truly unsettling is the violence of the white law enforcement toward the black hero, played by Duane Jones. No horror movie seemed to take on racism with as much visceral force, until this year, with “Get Out.” And Mr. Romero’s movie is even bleaker.

George Romero didn’t mean to tackle race in Night of the Living Dead, but he did anyway – Vox

In interviews about his smash horror hit Get Out earlier this year, Jordan Peele cited the 1968 zombie film Night of the Living Dead as one of his biggest influences. It’s no wonder. Without the movie — and its director, George Romero, who died on July 16 — we wouldn’t have Get Out or many other classic social thrillers (like Rosemary’s Baby and The Silence of the Lambs), which use the devices of fear and horror to make biting social critiques.

We wouldn’t have The Walking Dead, World War Z, Shaun of the Dead, or Zombieland, either — in Night of the Living Dead and its sequels, Romero invented the rules that guide our modern ideas about zombies: They’re reanimated deceased people who move slowly and have an insatiable desire to eat the living.

It is an amazing interview, more so when you think this is his last interview….

Take some time today, or later this week, and watch this…you will enjoy it.

I always loved John Heard as an actor, it is sad to see all the obituaries referring to him as “Home Alone Dad” when he was a part of such dynamic films and acted in roles that have performances which many critics consider outstanding.

He was a bit special to me, because I always thought my husband resembled him. 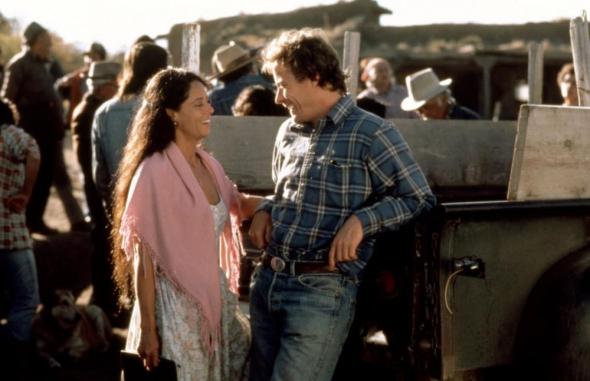 Actor John Heard, whose many roles included the father in the “Home Alone” series and a corrupt detective in “The Sopranos,” has died. He was 71 .

An investigation, which includes a toxicology test, is underway to determine the cause of his death, but there is so far no evidence of foul play, the office said.

TMZ reported that a representative for Heard said he was staying in the hotel while he recovered from back surgery at Stanford University Medical Center.

John Matthew Heard Jr. was born on March 7, 1946, in Washington and graduated from Clark University in Worcester, Mass., in 1968. He briefly pursued a master’s degree in theater at the Catholic University of America before leaving to build a professional acting career. His early years were spent in Off Broadway productions.

He made his film debut in 1977 in “Between the Lines,” about a socially conscious alternative newspaper in Boston about to be taken over by a big company. He led a cast that featured Jeff Goldblum, Lindsay Crouse and Marilu Henner.

Interviewed by The New York Times afterward — he was performing onstage at the time as an anxious husband in a production of August Strindberg’s “Creditors” — Mr. Heard struck a note of searching self-deprecation.

“I think this interview is a little premature,” he said, adding, “I don’t know, maybe after this is over, I’ll go back to Washington and be a plumber’s helper again.”

Instead, he went on to star in art house films like “Cutter’s Way” and later in commercial hits like “Big” (1988), in which he played an executive who mocks the little boy in a man’s body (Mr. Hanks), only to watch him climb the corporate ladder and win over his girlfriend.

Seriously, take some time to watch that last interview. It will give a better look on John Heard than any of these obits can…

#JohnHeard was an intrinsically American artist. John was unforgettable onscreen… and off. Goodbye my friend. pic.twitter.com/AzD1VlVMxD

RIP, John Heard. Pictured here with Jeff Bridges in CUTTER'S WAY, one of the best neo-noirs ever made. pic.twitter.com/I4kbvcopjg

RIP, ALEX CUTTER. Bless @Illeanarama for getting this last poignant interview with him. https://t.co/gto5syUsk3 pic.twitter.com/4eRLjent82

Felt inspired to write something when I heard about the passing of my friend, John Heard… pic.twitter.com/zi7gdQZYOa

I think that this tribute to Heard from Stern is something that goes a long way in describing Heard’s connection with fellow actors, especially if you watched that hour long interview with Illeana Douglas.

@Illeanarama had a great talk with #johnheard about his long career. It was a fitting tribute. https://t.co/p0tA8G9ifh

#JohnHeard, with whom I worked in
"Beaches" has died, too soon. I am so sorry. Without a doubt, one of the best actors of his generation.

RIP, John Heard. You were an underrated giant of your craft.

I learned a lot from a very generous John Heard during shooting of Heaven Help Us. RIP John.

John Heard in Trip to Bountiful.
One of those character actors who could have been the lead. Made every movie he was in better.#TCMParty pic.twitter.com/J5cDVTCYIL

Saddened by death of #JohnHeard. His performance in CUTTER'S WAY & movie had a profound affect on me. My @noirfoundation NOIR CITY design. pic.twitter.com/SRH2kxV1Jr

Oh no. John Heard is gone. He was IT when I started acting. Watch him in Cutter & Bone and Chilly Scenes of Winter with Gloria Grahame. 💔 pic.twitter.com/9AFGCLI4Ih

so many great John Heard movies in the 80s pic.twitter.com/2VM4PTdV0j

Well, that is the sad week that was in film…

7 Comments on “Sunday Reads: We Remember….”