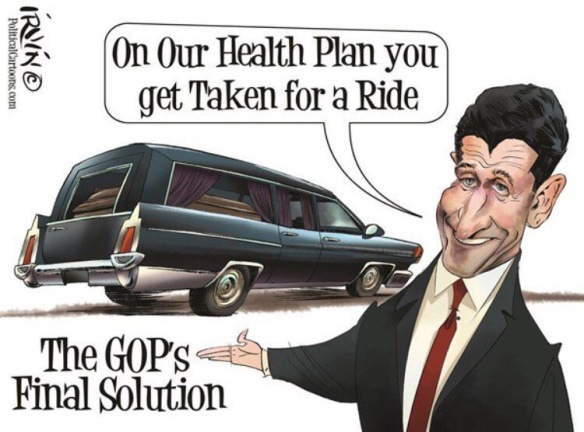 The GOP anti-healthcare bill, is truly the “Final Solution.”

At least it will be for folks like my mom.

If you are very sick…say with stage three ovarian cancer, and on Medicare…when this death bill passes, if you don’t get thrown off Medicare at first, the lifetime caps will get you anyway. Yeah, so as my mom is going through this hell, if she survives her surgery, she still must continue with the chemotherapy. That treatment (which will more than likely reach the lifetime cap) can be cut off by the states in mid-treatment.

These are exactly the reasons why the American Cancer Society urged concern about waiving these critical protections: “If a state decides that prescription drugs are no longer an essential health benefit, a plan could cap the amount it covers for cancer drugs—or decide to not cover cancer drugs at all—leaving patients to pay the entire bill.” And it is why they urged the Senate to “return to the drawing board” when they saw the bill’s text.

For more on this specific language in the bill: How the MacArthur Amendment Impacts Cancer Patient Protections | American Cancer Society Cancer Action Network

On April 25, 2017, the text of an amendment to the American Health Care Act (AHCA) to be offered by Representative MacArthur (R-NJ) was released.  The amendment could undo several key protections that are critical for cancer patients and survivors – including the prohibition on pre-existing condition exclusions.

The amendment would enable states to apply for a waiver that would allow insurers to rate individuals based on their health status in some instances.  States that have established a high-risk pool, use state stability funds (provided in the AHCA) or have adopted a state reinsurance program could allow insurers to impose health status underwriting for individuals who have a gap in coverage of at least 63 days.

While health insurers would be required to sell a plan to an individual with pre-existing condition like cancer, the premium charged could be so high that it would be unaffordable.  Compounding this is the fact that the tax credits offered under the AHCA would be significantly lower than those provided under current law and the AHCA would allow plans to increase premiums for older Americans.

Current law allows an age rating of 3:1 and the AHCA proposes to expand this to 5:1 – this means older Americans could be charged five times as much as younger Americans in premiums.  The MacArthur amendment would allow a state to specify an even higher age ratio in a waiver.

No Guarantee of Consistent Coverage

Current law requires insurance plans to offer ten categories of essential health benefits – including hospitalizations, physician care, prescription drug coverage, and other services.  Under the MacArthur amendment, beginning on or after January 1, 2020, states could apply for a waiver to create their own state version of essential health benefits.  This could mean that a state could choose not to cover specific kinds of benefits, including certain cancer drugs.  A state could also decide that an insurance plan no longer has to cover preventive services, leaving patients in one state with access, but patients in a different (even neighboring) state without access to prevention.

Another serious problem is the potential loss of key patient protections.  The cap on out-of-pocket costs, and the prohibition on lifetime and annual limits – are applied only to essential health benefits.  That means if a state decides that prescription drugs are no longer an essential health benefit, a plan could cap the amount it covers for cancer drugs – or decide to not cover cancer drugs at all – leaving patients to pay the entire bill.  Finally, depending on the state law, a plan may not have to cover services that a cancer patient may need, which is another way to discourage individuals who need those services from enrolling in the plan.

The AHCA includes lifetime coverage caps. If reached, a patient can lose health care IN THE MIDDLE OF CHEMO.

For a rich man's tax cut.

What kind of world do we live in, where people literally have to beg for their lives, to keep their healthcare?! #HellerVoteNo #resist

For some real life outlooks on how this death bill will effect real people, take a look at the following thread:

Or…take a look at this:

The benchmark plan for tax credits in the Senate bill would be equivalent to a bronze plan, with an average deductible over $6,000. pic.twitter.com/QUx1fuQgIr

TRANSLATION: a poor person earns <$12,331/year. with #Trumpcare they have to pay $6,000 FIRST, then file taxes for a #AHCA deductible https://t.co/LcyT6OmjdB

It is all too upsetting, every day I send letters to my representatives in Congress. I realize many feel this bill will not pass, but I do not see the failure of this monstrosity in so clear a light. Nothing as horrible as this bill seems possible now.

GOP health care plan helps no one but The Rich pic.twitter.com/s0la3GL8Fm

But hey…what the hell, at least we have this:

You know what @SenateMajLdr made sure was covered in the hateful Healthcare Bill? Erectile dysfunction. pic.twitter.com/IsEr8hFoMy

That does it, I am too disgusted to go on…