There has been a mass shooting…they are calling it a terror attack, whether it is a “domestic or foreign” they have not specified…according to MSNBC at 8:04am. 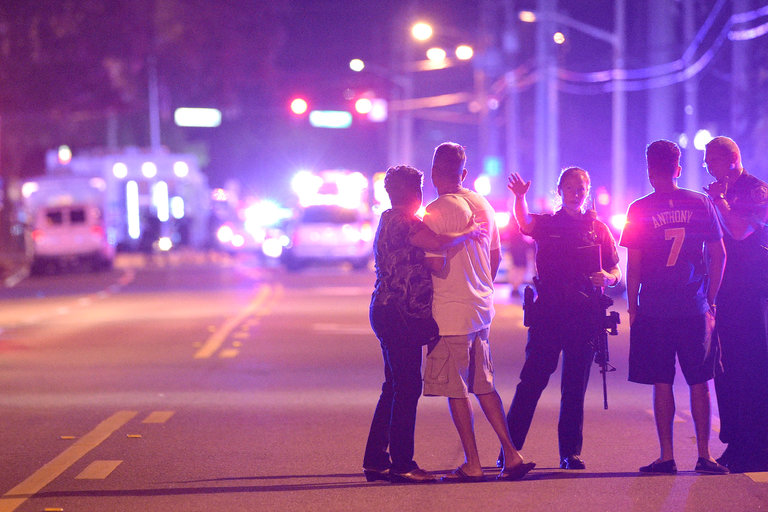 The Pulse is a large gay night club in Orlando…

That number has since been increased to 50 dead.

At least 42 injured, about 20 deadFBI investigating as act of terror
Shooter acted as lone wolf, has possible ties to radical Islam
#Pulse

Updated to add screenshot of the above tweet which was sent at 4:44 this morning:

At that time, even so early…someone had leaked to the press the suspect shooter was of Islamic descent.

Approximately 20 people are dead and scores wounded after a gunman opened fire and took hostages at a gay nightclub in Orlando, Florida, police said.

Officials said a hostage situation developed after the gunman stormed the Pulse Nightclub about 2 a.m Sunday. The assailant was shot dead about three hours later when a SWAT team entered the club, police said.

The incident is being investigated as an act of terrorism.

“We are looking at probably in the range of 20 [dead], but we don’t want to give you an exact figure,” Orlando Police Chief John Mina said.

Police said a uniformed officer working extra duty engaged in a gun fight with the shooter after he opened fire at the entrance to the club. Mina said the incident then developed into a hostage situation.

“A little after 5 a.m. this morning we made the decision to go in on a rescue,” Mina said, adding that an officer was injured after being shot in the head.

“It appears his helmet saved his life,” he said. “So he has an injury to his eye, but it looks like the bullet did hit his helmet.”

Revelers described scenes of horror inside the club. One witness told MSNBC that they had to crawl over bodies to escape.

A post to the club’s Facebook page at around 2 a.m. warned “everyone get out of Pulse and keep running.” Witness video from outside showed dozens of first responders at the scene, and several victims on the ground.

“It was tragic,” club-goer Christopher Hansen told MSNBC. “I wasn’t sure if it was the music, because … it went with the beat almost until you heard just too many shots.

The gunman, who has not been identified, was carrying an assault rifle, a handgun and a “device.” The Orange County Sheriff’s Office hazardous device team is now searching the area.

The FBI is assisting with the investigation. Agents say they cannot rule this out as an act of domestic terrorism and that the suspect, who is not from Orlando, may have leanings toward extreme ideologies.

Witnesses said they heard at least 40 shots fired inside the popular gay club and estimated that at least 20 people had been shot.

Dozens of emergency vehicles surrounded the chaotic scene at the  club at 1912 S. Orange Ave. after the 2 a.m. shooting and rescue squads were transporting multiple victims to area hospitals.

The Orlando Fire Department called for its bomb squad and hazardous material team to the scene after 3 a.m. Police K-9 dogs are searching the area around nearby Orlando Regional Medical Center with an armed deputy in head-to-toe military gear.

Emergency workers were seen taking victims away from the scene in large trucks–in one case, an emergency worker was doing chest compressions on one of the victims.

Just after the shooting, Pulse Orlando posted a note to its web page that said “Everyone get out of Pulse and keep running.” The popular gay bar was full of people at the time of the incident.

Orlando nightclub shooting: police say up to 20 dead in terrorist incident | US news | The Guardian

In a press conference on Sunday morning, an FBI spokesman said investigators believed the attacker may have had extremist beliefs, and would consider possible links to Isis, but cautioned they were pursuing multiple leads. Authorities earlier said a controlled explosion had taken place inside the club, and urged media to avoid reporting inaccuracies.

Police also confirmed an officer on duty at the club exchanged shots with the gunman, and the situation then descended into a “hostage situation”. The situation was resolved when a Swat team stormed the nightclub after receiving messages from club patrons who were hiding in the club while the gunman was still at large.

Several explosives and an armoured vehicle were used to break through a wall of the nightclub and rescue approximately 30 hostages. The suspect was shot by a police officer during this intervention.

John Mina, the chief of police, said they were still trying to identify the gunman, but he appears to have been “well-organised”. They could not confirm if the man was operating as a lone wolf or in coordination with others, but believe there is no increased threat to Orlando or the surrounding areas.

Police confirmed several “suspicious devices” were found in and around the nightclub, including one on the gunman and one on his car.

“This is an incident, as I see it, that we can definitely classify as a domestic terrorism incident,” said the Orange County sheriff, Jerry Demings.

When asked if the suspect had any affiliation with Islamic State, the FBI assistant agent in charge, Ron Hopper, said: “We do have suspicions that the individual may have leanings toward that ideology.” Though when pushed as to what led him to believe that, he clarified that all possibilities were being investigated.

The club itself posted a message on its Facebook page about 3 a.m.: “Everyone get out of pulse and keep running.”

Customers streamed out of the club into a chaotic situation with little idea of where to go. “Cops were saying, ‘Go, go, clear the area,’ ” Christopher Hansen told an Orlando television station. “You don’t know who’s what and who’s where.”

As the sun came up, helicopter-shot video showed a situation that seemed to be under control, although windows on one side of the club appeared to be shot out.

Phone camera videos shot at the scene show police cars, ambulances and other emergency vehicles outside the club on South Orange Avenue in downtown Orlando. Streets around the the club were shut down for several blocks.

In one video, shots could clearly be heard as men and women ran from Pulse. Some of the clubgoers told local television reporters that the music was so loud it was difficult, at first, to distinguish the shots from the pulsing beat.

More than 100 people were believed inside the club when the shooting began about 2 a.m.

Many of the wounded were taken to Orlando Regional Medical Center, about three blocks from the club, which was placed on lockdown after receiving several gunshot victims. “Only essential workers are being allowed access into the building,” the hospital said in a statement.

On Pulse’s Facebook page, club officials promised to post updates as they came in: “As soon as we have any information, we will update everyone.”

“Please keep everyone in your prayers as we work through this tragic event,” the nightclub post said. “Thank you for your thoughts and love.”

Local television stations broadcast interviews with people outside the club and the Orlando Regional Medical Center, about three blocks away from the club, anxiously waiting to hear from people who they said were still inside.

WKMG and WESH broadcast interviews with the crowds milling outside the hospital. One woman said she rushed to the area after she got a call from her daughter, who said, “Please come get us and come get us now.”

One mother told CNN: “A girlfriend of my son called and said he got shot, he got shot and she was crying.”

She said could not find her son, or even get information on where he had been taken. Some of the victims had been transferred to other hospitals “because this hospital was full,” she said outside Orlando Regional Medical Center.

The club, which calls itself “Orlando’s Latin Hotspot,” hosts an “Upscale Latin Saturdays” party on Saturday night with three D.J.s and a midnight show.

A terrorist opened fire inside a popular Orlando gay club near closing time early Sunday leaving “approximately” 20 people dead and 42 others wounded, according to authorities.

The 2 a.m. attack was “well organized and well prepared,” said local cops as FBI officials painted the attack as domestic terror. The shooter, who was not from the Orlando area, may have had “leanings” toward radical Islam, Special Agent Danny Banks revealed.

Christopher Hansen was in the VIP area when the tragedy began to unfold.

“I was thinking, are you kidding me? So I just dropped down. I just said, ‘Please, please, please, I want to make it out,’” he said. “And when I did, I saw people shot. I saw blood. You hope and pray you don’t get shot.”

The chaos continued as a barrage of gunshots were heard erupting at the nightclub after police detonated a “controlled explosion.”

Moots, who lives across the street from the club, said he saw police officers putting wounded clubbers into trucks and ambulances.

“We saw people being taken away with bullet wounds on their arms and abdomen,” Moots told The News.

News conference set for 9:30 est….this is a developing situation…updates will be posted in the comments.