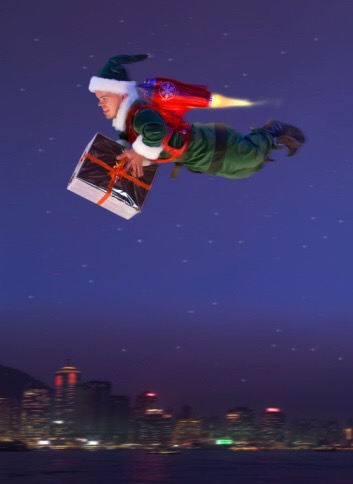 Well another commercial aircraft has gone missing in the area of Indonesia. This time it is an Air Asia flight: [Updated statement] QZ8501
https://m.facebook.com/notes/airasia/updated-statement-qz8501/10152667884908742

AirAsia Indonesia regrets to confirm that flight QZ8501 from Surabaya to Singapore has lost contact with air traffic control at 07:24 (Surabaya LT) this morning. The flight took off from Juanda International Airport in Surabaya at 0535hours.

The aircraft was an Airbus A320-200 with the registration number PK-AXC. There were two pilots, four flight attendants and one engineer on board.

And if that was not enough, a ferry with over 400 passengers is also in trouble: Norman Atlantic ablaze: Major rescue under way as Greece-Italy ferry evacuated in high winds – Europe – World – The Independent
http://www.independent.co.uk/news/world/europe/norman-atlantic-ablaze-major-rescue-under-way-as-greeceitaly-ferry-evacuated-in-high-winds-9946679.html

An international rescue effort was under way in high winds after a car ferry carrying 466 passengers and crew caught fire while sailing from Greece to Italy and its captain ordered its evacuation.

Passengers who telephoned Greek television stations gave dramatic testimony of conditions on the ship, which caught fire just before 6.00 a.m. local time (04:00 GMT) while travelling from Patras in western Greece to the eastern Italian city of Ancona.

“They tried to lower some boats, but not all of us could get in. There is no co-ordination,” one said. “It’s dark, the bottom of the vessel is on fire. We are on the bridge, we can see a boat approaching… we opened some boxes and got some life vests, we are trying to save ourselves.”

It was unclear whether there had been any casualties or whether any passengers were in the water, where cold winter temperatures would make survival difficult unless rescue came quickly.

The Norman Atlantic, carrying 222 vehicles, 411 passengers and 55 crew, was 44 nautical miles northwest of the island of Corfu when it sent a distress signal after a fire started in the lower deck, Greek coast guard officials said.

Makes you wonder what other massive transportation disaster will make headlines today…we have the air and sea covered, it will have to occur on land.

Since I am writing this post on my iPhone, the links are short and few.

None of the examples should surprise you.

Investigators have traced the gun Ismaaiyl Brinsley used to kill two New York City police officers and wound his ex-girlfriend to a Georgia strip mall 900 miles away. The Arrowhead pawn shop, which bills itself as a “family-owned business dedicated to good prices, good customer service and good vibes,” as of 2010 was the fifth-largest source of guns used in crimes nationally and the number-one source of out-of-state guns seized by the New York Police Department.

What happened between the time the silver Taurus semiautomatic handgun was purchased in 1996 and Brinsley came across it? We don’t know. Brinsley was barred from owning a gun because he had committed multiple felonies; if he had to complete a background check, he would have failed it. But he never had to complete a background check. Police say the Asian man who bought the gun at Arrowhead later gave it to his cousin, and there have been no traceable purchases since, meaning it exchanged hands in private and illegal deals.

Weak federal laws and disparate state laws enable a black market where felons and domestic abusers can get their hands on guns. Georgia is among many southern states whose lax gun laws effectively supply firearms for criminal activity in states with stricter laws. Some 90 percent of guns traced in New York City crimes come from out-of-state sources. Compare New York’s laws to a state like Georgia, and it’s easy to see why these southern states are known as the Iron Pipeline.

Read more at the link, I suspect it is only going to get worse.

And my last link, because my index finger is getting tired. Yes, I type on my phone with my one finger…

How Humans Spend Their Time
http://www.businessinsider.com/how-humans-spend-their-time-2014-12?

Most human beings get about 75 years of existence.

We spend about a third of those hours sleeping, a number that hasn’t changed much over the centuries.

What has changed is what we do with the remaining time.

As the following two charts show, over the past 150 years, thanks to the irrepressible inventiveness and ingenuity of the human animal, we have engineered a profound shift in what we do with our waking hours.

Thanks to the remarkable productivity enhancements we have made over the past 150 years, the average workweek in most countries has dropped by about 30 hours:

Well, whatever you want to call it, I am off to spend my time sleeping.

Think of this as an open thread.

But wait…perhaps this is the third shoe to drop: One dead and 15,000 cars stranded in French Alps as snow sweeps region – Europe – World – The Independent
http://www.independent.co.uk/news/world/europe/one-dead-and-15000-cars-stranded-in-french-alps-as-snow-sweeps-region-9946733.html