Sunday Reads: Quick Round of Links 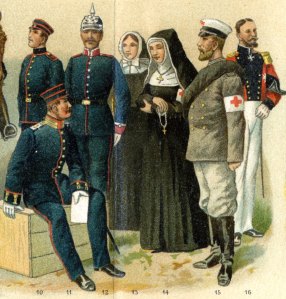 Costumes of Medical personnel during WW1

We are still trying to adjust to this new life, the T1D life. So as you can imagine, today will only be a short list of links…please feel free to think of it  as an open thread.

After his toddler son died after being left inside an SUV for seven hours, a Cobb County man told police he had researched children dying in hot vehicles, court documents released Saturday morning state.

Justin “Ross” Harris told police he feared his 22-month-old could be left inside a vehicle, according to search warrant affidavits obtained by The Atlanta Journal-Constitution. No information about the timing of Harris’ online searches was released. And the questions that many across the country have been asking — how did this happen and why — remain unanswered.

“During an interview with Justin, He stated that he recently researched, through the internet, child deaths inside vehicles and what temperature it needs to be for that to occur,” search warrants state. “Justin stated that he was fearful that this could happen.”

The search warrant affidavits released Saturday offered the first new facts released in the death of the toddler, Cooper Mills Harris, since Wednesday. However, the documents shed no details on what prompted police to arrest and charge Ross Harris with felonies so swiftly within hours of the boy’s death.

I guess this is a depressing post at that: Tweets from Hillary Clinton: Sad News | Still4Hill

Heartbreaking news: a vital voice for justice is silenced. http://m.hrw.org/news/2014/06/26/libya-tribute-salwa-bughaighis …

On Wednesday, following countless threats against her and her family, Salwa was assassinated, shortly after she voted in Libya’s parliamentary election. With Salwa’s death, the original idealism of the 2011 uprising that overthrew Gaddafi’s tyranny has received another crushing blow, and many Libyan women have lost a role model.

There was also a suicide in the news: Tea party leader Mark Mayfield suicide: A sign of politics ‘beyond the pale’? (+video) – CSMonitor.com

Mark Mayfield, a respected lawyer and tea party operative in Mississippi, has died after being accused of taking part in an unseemly, Watergate-like conspiracy to undermine long-time Sen. Thad Cochran’s campaign.

No foul play is suspected around the self-inflicted gunshot wound, local police said. Mr. Mayfield left a note behind, but authorities have not released it.

A tea party group board member, Mayfield had worked to get Sen. Cochran’s challenger Chris McDaniel elected. On Tuesday, Cochran narrowly won the primary. Mr. McDaniel has denied involvement, and has not been implicated in the scheme to photograph Cochran’s wife at a nursing home.

“It has been an uphill fight,” said state assemblyman Tom Ammiano, who has fought for over a decade to secure funding for the barrier. “But here we are, almost shovel ready.”

The project will cost $76 million to complete. Of that amount, $7 million will come from a state tax enacted by voters on those who make more than $1 million a year, and is earmarked for mental-health services. The rest will be paid for with federal funds that recently became available and local money from the bridge district.

The plan to create suicide barriers on the bridge, where 1,600 people have leapt to their deaths since the span opened in 1937, was a subject of controversy for decades, with opponents arguing the mesh would mar the structure’s beauty.

In 2008, the bridge’s board voted to install a stainless steel net, rejecting other options, including raising the 4-foot-high railings and leaving the world-renown span unchanged.

Two years later, they certified the final environmental impact report for the net, which would stretch about 20 feet wide on each side of the span. Officials said it would not mar the landmark bridge’s appearance.

But funding for the project remained a major obstacle until two years ago when President Barack Obama signed into law a bill making safety barriers and nets eligible for federal funds.

Some of the money still requires additional approval, but the bridge’s board has now taken its final step in adopting the net.

“The tragedy of today is that we can’t go back in time, we can’t save … the people who jumped off the bridge. But the good thing, with this vote today, we can vote in their memory,” board member Janet Reilly said.

“We will save many lives who have followed in their footsteps – and that’s what’s so extraordinary about today.”

Family members of suicide victims were present for the vote. Seconds after the decision, tears of many people in the standing-room-only crowd were followed by shouts of joy.

And we are coming up on the 100 year anniversary of the First World War. World War I – Scientific American

The political crisis in Europe that followed the assassination of Archduke Franz Ferdinand and his wife, Sophie, on June 28, 1914, in Sarajevo received no notice in the pages of Scientific American. When Germany declared war on Russia and France and then invaded Belgium on August 4, the magazine weighed in: “It is very difficult for the American to realize that the great European war, which has been dreaded for a generation, is actually taking place. The calamity is so appalling that it seems to stretch beyond the reach of the imagination” [August 15, 1914].

Thereafter, the then weekly Scientific American covered the First World War as a vast, world-changing event in which science, technology and massive industrial output played key roles. The American Civil War (1861–1865) saw the first successful use of the machine gun and the submarine, but both sides manufactured fewer than 100 machine guns (including about 20 Gatlings) and 20 submarines. In World War I more than one million machine guns were churned out. Artillery became the king of the battlefield, with up to a billion artillery shells fired during the war. The countermove from the science of defense was to dig deeper into the dirt. One modern calculation says it took 329 shells to wound an opponent sheltering in a trench, four times that to kill him.

Go to the link and look at some of the images, also take a look at the pictures and original article here at this pdf doc. from November 21st, 1914: The Care of the Wounded A Vast and Complicated System of Which Little is Heard SA-Archives-the-care-of-wounded.pdf

Lets end with this: New Macroscelides micus species is more closely related to an elephant than a shrew | Mail Online

It may seem hard to believe that such an unusual looking animal has remained hidden for so long.

But scientists have only just discovered a new species of elephant shrew – or round-eared sengi – in the remote deserts of south western Africa.

While it is the smallest known member of the 19 sengis in the order Macroscelidea, the small creature is in fact genetically more closely related to an elephant than a true shrew.

Cute: Scientists have discovered a new species of elephant shrew – or round-eared sengi (pictured) – in the remote deserts of south western Africa

The Etendeka round-eared sengi, or Macroscelides micus, was discovered by scientists from the California Academy of Sciences. It is the third new species of elephant shrew to be found in the wild in the past decade.

More pictures in info at the link.

Enjoy your day. This is an open thread.

12 Comments on “Sunday Reads: Quick Round of Links”