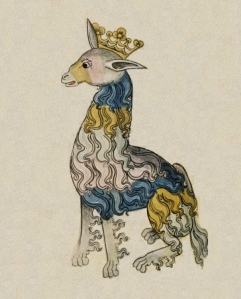 Artwork from one of King Henry VIII book of animal illustrations.

Well, there has been an arrest made involving Liberty Reserve. I don’t know the complete story about this latest money scheme, but it is a big one.

U.S. prosecutors have filed an indictment against the operators of digital currency exchange Liberty Reserve, accusing the Costa Rica-based company of helping criminals around the world launder more than $6 billion in illicit funds linked to everything from child pornography to software for hacking into banks.

The indictment unsealed on Tuesday said Liberty Reserve had more than a million users worldwide, including at least 200,000 in the United States, and virtually all of its business was related to suspected criminal activity.

“Liberty Reserve has emerged as one of the principal means by which cyber-criminals around the world distribute, store and launder the proceeds of their illegal activity,” according to the indictment filed in U.S. District Court for the Southern District of New York.

There was another train crash today, what is that saying…they always comes in threes?

Fifteen freight train cars derailed in an industrial area of Maryland this afternoon causing an explosion, the collapse of several buildings and leaving one person in serious condition, according to authorities.

The CSX train derailed in the White Marsh area around 2 p.m., according to officials.

An overturned garbage truck could be seen at the scene and the driver was the injured person, according to the Baltimore County Police and Fire Department. The truck driver was removed from the truck and taken to a hospital. The driver is in serious but stable conditions, authorities said.

The train and truck collided, but officials have not yet provided details on the collision or whether the collision caused the derailment.

Down in Florida today, things are revving up for the George Zimmerman trial which starts in two weeks. I have a few links for you on the latest ruling from Circuit Judge Debra S. Nelson:

At the start of George Zimmerman‘s murder trial, which begins in two weeks, expect Trayvon Martin to be portrayed as an innocent teenager, an unarmed 17-year-old who was killed while walking home in the rain.

By the time it concludes, however, jurors may have a more menacing view of him.

In rat-a-tat fashion, Circuit Judge Debra S. Nelson buzzed through a series of pretrial motions on Tuesday, laying the groundwork for what jurors will hear during the second-degree murder trial, expected to be one of the most watched this year.

One of the judge’s clearest rulings: Defense attorneys will not get more time to prepare. Jury selection will begin June 10, when 500 potential jurors are scheduled walk through the courthouse doors.

And, in general, she banned defense attorneys from introducing reputation-damaging evidence about Trayvon — but she left lots of wiggle room.

If defense attorneys can convince her during the course of the trial that it’s relevant, she may allow them to put on evidence showing that at the time of his death, Trayvon had marijuana in his system; that he had discipline problems at school; and that he had a history of fighting.

After Tuesday’s two-hour hearing, defense attorney Mark O’Mara predicted he would be able to show their relevance.

“I’m hopeful I’ll be able to lay a foundation to get it in,” he said.

Specifically, he was referring to text messages found on Trayvon’s cell phone, which indicate, among other things, that the Miami Gardens teenager was involved in competitive fighting.

Mara said he was happy with the judge’s decision. I bet he was…This is from the local newspaper…I wonder what sort of jury pool this will leave the prosecution to pick from.

Also happy with the judge’s rulings was Benjamin Crump, an attorney for Trayvon’s family, who interpreted them as outright bans.

The judge did issue some of those: Jurors will not hear about Trayvon’s prior marijuana use nor will they see a photo of him wearing a set of gold teeth.

Those rulings came because last week, defense attorneys released a glut of evidence, including photos from Trayvon’s cell phone that showed potted marijuana plants, a semiautomatic handgun and text messages revealing discipline problems at school and that his mother had asked him to move out.

Crump on Tuesday described that as defense attorneys “polluting the jury pool.”

A few more takes on the Trayvon Martin Case:

At a hearing on Tuesday in a Seminole County court, Circuit Judge Debra Steinberg Nelson denied a string of defense motions concerning evidence that was intended to portray Mr. Martin as a troubled teenager with a propensity for fighting and an interest in guns. Prosecutors argued that such evidence had nothing to do with Mr. Martin’s death.

Mark O’Mara, Mr. Zimmerman’s lawyer, argued that Mr. Martin’s drug use could have made him aggressive and paranoid, which the defense said might have prompted him to attack Mr. Zimmerman, a neighborhood watch volunteer who is in his late 20s.

“All of that fits in squarely to what the defense is going to present: that George Zimmerman was put in the position that he had to act in self-defense,” Mr. O’Mara, said. “How could you keep us from arguing that?”

Judge Nelson replied: “The rules of evidence keep you from doing it.”

In recent weeks, the actions of Mark O’Mara, the lawyer for Zimmerman, have clearly been geared toward developing a public relations campaign to portray the young Trayvon as negatively as possible. Zimmerman’s lawyer has been working overtime to get into the public consciousness images of Trayvon as a discipline problem at school and elsewhere, as someone prone toward violence and someone who was, quite simply, a menace.

O’Mara is an experienced lawyer who surely knew that none of the information and photos he was peddling would be admissible in his opening arguments in court. However, he engaged in a clever effort to prejudice any potential jurors. It was his calculation that the continued flow of negative information about Trayvon couldn’t help but seep into the minds of the potential jury and help create doubt upon the character of the teenager.

In many ways, the events of the last weeks, coupled with the ruling Tuesday by Circuit Judge Debra S. Nelson, have set the stage for the epic trial that is to begin June 10 in Sanford, Florida, the very city where the teenage Martin was shot and killed by Zimmerman in a dark gated community. Indeed, it signals the unofficial beginning of the trial.

It represents a battle between the two sides of what images of the two central figures in the case will prevail. Zimmerman’s attorney is seeking to make Trayvon Martin out to be some ne’er-do-well thug so sinister that a jury could readily understand why a neighborhood watch volunteer like Zimmerman might reasonably shoot and kill him.

To that end, O’Mara and the defense team have worked feverishly — even into the three-day Memorial Day weekend — to release photos of Trayvon with gold teeth, of information regarding the teenager’s marijuana use as well as revelations of him fighting or being suspended from his high school.

Well, they have done a good job of getting that negative image of Martin out there. Like I said up top, Mara is doing this for one thing only…speaking of which, look at this next link: Sanford residents discuss impact of George Zimmerman case | Bay News 9

The upcoming George Zimmerman Trial, and everything that has led up to it, has changed the city of Sanford forever.

With the trial just days away, a panel of six Sanford residents from several different backgrounds talked about how they’ve been affected by it.

Go and see what this “panel” of residents had to say.

I can already anticipate the “discussion” this trial will bring about within the blogosphere…oof!

Last night while TCM was on my TV, and I was about doing laundry, ironing shirts and other things I caught just a mention of one word in a trailer of a movie that TCM is showing later on this week. Well, when I heard this one word I had to stop all I was doing and rush to the TV to see what film it was so that I could schedule the DVR to record it.  The trailer is below, go ahead and give it a look-see and I bet you will be able to guess which part made my ears perk up take notice!

Y’all have a wonderful evening, this is an open thread.