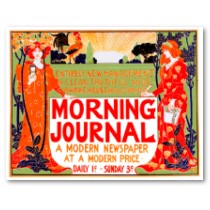 I am back in New Orleans and looking forward to less–hopefully no–major events in my life.  I’m exhausted!  There are parts of corporate finance that are actually more interesting than you would think.  We’ve talked some about moral hazard.  This is part of the principal agent problem. This problem happens when you have a senior manager that is hired to run a firm who is an “agent” for the owners.  One of the related topics is corporate governance and the role that the board of directors plays in watching the agents.  JP Morgan has some classic problems as outlined in this Bloomberg article.

The three directors who oversee risk at JPMorgan Chase & Co. (JPM) include a museum head who sat on American International Group Inc.’s governance committee in 2008, the grandson of a billionaire and the chief executive officer of a company that makes flight controls and work boots.

What the risk committee of the biggest U.S. lender lacks, and what the five next largest competitors have, are directors who worked at a bank or as financial risk managers. The only member with any Wall Street experience, James Crown, hasn’t been employed in the industry for more than 25 years.

“It seems hard to believe that this is good enough,” said Anat Admati, a professor of finance at Stanford University who studies corporate governance. “It’s a massive task to watch the risk of JPMorgan.”

JPMorgan, with $1.13 trillion of deposits, is the only one of the six largest U.S. lenders that doesn’t have a former banker, regulator or finance professor on its risk committee.

Only Bank of America’s risk committee is as small as JPMorgan’s. Goldman Sachs’s has eight members, including Stephen Friedman, a former chairman of the firm who advised President George W. Bush on economic policy, and James Schiro, a former CEO of Zurich Financial Services AG.

This is a big wow.

Critics of President George W. Bush’s anti-terrorism efforts, mainly Democrats and some Republicans, rejoiced when Barack Obama was elected. They were convinced that what they considered the post-Sept. 11 trampling of constitutional rights and civil liberties would end.

As a candidate, Obama, a former constitutional law professor, promised to close the prison at Guantanamo Bay, Cuba, as well as to end indefinite detention and the rendition of terrorism suspects to other countries, where they often were tortured. He also vowed greater accountability and transparency in the conduct of war.

Things look different today. In his new book, “Power and Constraint: The Accountable Presidency After 9/11,” Jack Goldsmith, a Harvard Law School professor who served in the Office of Legal Counsel under Bush and objected to some of that administration’s tactics, writes: “The Obama administration would continue almost all of its predecessor’s policies, transforming what had seemed extraordinary under the Bush regime into the ‘new normal’ of American counter-terrorism policy.” That seems only a slight exaggeration.

Everyone does it, using language that renders women as animals;the list is endless. This culturally ingrained misogyny, as reflected in acceptable language that dehumanizes half the world’s population, is not limited to any one country or religion, or followers of one or another ideology.

But in U.S. politics, a particular trend has emerged among a certain set of conservatives: that of equating a woman with a farm animal. When, last week, Safeway Senior Vice President General Counsel Bob Gordon stood before a shareholders’ meeting telling a “joke” that portrayed Secretary of State Hillary Clinton and House Minority Leader Nancy Pelosi as being worth less than a pair of hogs,he clearly had no reservations about publicly making this joke and obviously thought it was funny. After all, he was only elaborating on a meme that’s been evolving among right-wing Republican politicians in state legislatures.

Let’s see. There’s state Rep. Terry England, the infamous Georgia legislator comparing pregnant hogs and cows to women while debating a proposal that became known as the “women as livestock bill,” which would hold pregnant women to the animal husbandry standard of carrying a dead fetus to term.

Then there’s Missouri House Majority Leader Tim Jones, explaining that he was well-prepared to propose restrictions on women’s health options because his “father’s a veterinarian.”

And Arizona state Sen. Russell Pearce’s sexist and racist reasoning that immigrant women come here to “drop a child” during their “breeding season.”

Montana Rep. Keith Regier recently explained the higher value of “preg-tested” cows, forcing his opposition to point out that “We do not place price tags on women in the same way that we do on cattle.”

State Rep. Mary Franson of Minnesota created a video to explain, as a context for discussing food stamps, that “animals may grow dependent and not learn to take care of themselves.” That was similar to South Carolina Lieutenant Gov. Andre Bauer’s explanation of welfare mothers as “stray animals” who will “breed”because they don’t “know any better.”

These right-wing politicians and legislators obviously favor pigs, cows and livestock in their “women are not quite human” metaphors and analogies. What does this tell us about how conservatives like their womenfolk? What do these animals share?

The USS Illinois will be the first Navy submarine to be staffed by an all-female crew. The sub will be sponsored by First Lady Michelle Obama.

On Monday, First Lady Michelle Obama officially sponsored the Virginia-class submarine, which will be one of the newest nuclear-powered boats scheduled to enter the fleet by 2015, according to a White House statement.

“It’s an honor and a privilege to serve as sponsor of the USS Illinois,” the first lady said, according to the statement. “This submarine is a tribute to the strength, courage, and determination that our Navy families exhibit every day.”

The Illinois is the second ship the First Lady has sponsored since coming to the White House. She sponsored the Coast Guard Cutter Stratton, based in Alameda, California, earlier this year, according to administration officials.

Obama’s endorsement of the Illinois, particularly its all-female crew, comes as women in the military are pushing the Pentagon for a larger role in combat operations.

The Pentagon announced in February that it was opening up 14,000 new positions, most in the Army, to women after a review of its policies on women in combat.

How cool is that?

What’s on your reading and blogging list this morning?