← Women Of Courage
Doonesbury Takes on the Zygote Zealots →

Alas I have tried to halt time with my super awesome Mom powers, but to my dismay is has not been a success. My darlin booger will be four in a matter of hours. I can see him getting taller and the wheels and gears turning in that smart brain of his.

Happy Birthday Sebastian. Have awesome fun will all your friends tomorrow at your party. You are everything a momma could ask for and more. Love you, mommy.

Funny how there are some people you meet in life that no matter what length of time passes, you can just connect like you never were apart. That is the kind of friend Jessica is…I love and treasure my friends that are special in that way, I feel so fortunate to have this bond and quiet understanding…

No matter if we live on a sunny coast of Florida, in the land of corn or in the backwood mountains of Banjoville…we are never too far apart in our hearts.

I know it is a strange way to start a post, and a bit heavy on the sentiment, but the Earth keeps spinning in its own little portion of the universe…and during those years we have on this planet, it is important to live and to be passionate about what you feel is right.

Jess has fallen asleep while trying to get the birthday boy to bed, so while she lies resting next to that little booger, I sit here writing this post…and I smile.

The world is still turning, and soon it will spin on a new morning…and a little boy will celebrate his fourth birthday.

The Sunday news round-up begins after the jump.

Today marks one year since the Japan earthquake and tsunami. There are many news links on this story, so I will just list several for you to look at.

Japan marks one year since quake and tsunami disaster

Services held to remember the earthquake and tsunami which killed thousands and left communities devastated one year ago.

Japan tsunami: the recovery, one year on

Press agencies have been gathering pictures from some of the worst-hit areas of Japan showing how communities are slowly repairing their towns. In a series of montages they have combined pictures taken during or just after the tsunami hit, with images taken up to a year later. Photographs: AP, AFP, Getty

Japan’s Emperor will lead millions of the country’s citizens in prayers and remembrances today for the more than 19,000 killed or lost in the quake and tsunami that struck at 2:46 p.m. one year ago. Some train services in Tokyo will halt temporarily as part of the memorial.

People hang paper cranes designed as prayers for the souls of victims of the March 11 tsunami disaster in Minamisanriku, Miyagi prefecture on Saturday. 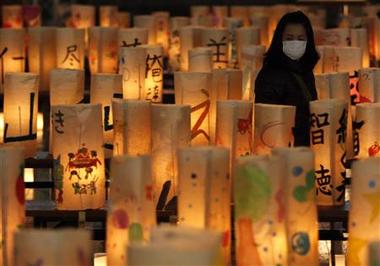 With a moment of silence, prayers and anti-nuclear rallies, Japan marked on Sunday one year since an earthquake and tsunami killed thousands and set off a radiation crisis that shattered public trust in atomic power and the nation’s leaders.

The image I think of when I remember that day a year ago is this one:

It is a picture of a panda hugging one of the workers who take care of the animals at the zoo’s panda exhibit on the day of the earthquake.

Japan Earthquake Anniversary: Photos From Before And After Tsunami Show Destruction (PHOTOS)

The devastation caused by the earthquake and subsequent tsunami that struck Japan on March 11, 2011, cannot be overstated; the 9.0-magnitude quake created scenes cut from disaster films, but with real-world consequences. CNN reports that 30-foot walls of water took everything in their paths, from rice fields to reinforced buildings.

Roads cracked like porcelain, cars were tossed like toys, and hundreds were killed in an instant. The destructive force of last year’s disaster lingers a year later.

“This is the kind of earthquake that hits once every 100 years,” restaurant worker Akira Tanaka told the BBC.

More information about the tsunami and Fukushima Daiichi nuclear disaster slowly has trickled out, with orphaned photos still finding their way home, and secret reports about the lack of preparation for a nuclear disaster painting a grave portrait. As the fallout continues, California prepares itself for the tsunami debris to reach its coasts.

I remember those news articles and photographs from the first anniversary of the Tsunami that struck the Indian Ocean in 2004.  Do you remember them?

After the Tsunami – Special Reports from CNN.com

The Deadliest Tsunami in History?

I want to move on to something a little lighter. This also is a Weekend for Extraordinary Women…So for some uplifting stories check these out.

Women in the World – The Daily Beast

More from The Daily Beast:

150 Women Who Shake the World

They’re starting revolutions, opening schools, and fostering a brave new generation. From Detroit to Kabul, these women are making their voices heard.

I have purposely avoided any news on the GOP campaign this weekend…so here are a couple of articles on the clown show:

I just don’t have the energy to find any more links for you about these nuts…we’ll just leave it at that.

From Minx’s Missing Link File:  Let’s get back to the subject of women, extraordinary women…The women behind the Oscar

KARACHI: Behind the glamour of Pakistan on the Academy Awards red carpet and the outpouring of excitement on television, Twitter and Facebook lies the bravery of the female subjects of Saving Face, who have to keep a low profile for their own security.

This is a story about brave, courageous women. Give that a few minutes of time to read about what these women went through and the strength needed to bring their experiences to the screen.

Easy like Sunday Morning Link of the Week: I’m sticking with the women…this time a story about a photojournalist turning art into activism.  Leslie Thomas and Art Works Projects

Leslie Thomas wants to shock you. She wants to anger you. And above all, she wants you to do something.

She’s not talking about run-of-the-mill, “Hey buddy, watch your step” angry or TMZ sleaze shock. She’s talking about the great humanitarian and social crises of our time, like in Darfur, Afghanistan or Myanmar. And yes, she’s talking to you.

Ms. Thomas,  an architect turned activist,  is the founder of Art Works Projects, which uses photography to raise awareness of human rights concerns and spur action. Over the last five years it has mounted exhibitions and presented large-scale public slide projections on various themes. It has now published a book of images with accompanying posters and curriculums on the lives of women in Afghanistan. A wide-ranging retrospective opens in Slovenia on Tuesday.

“My goal is to be the most emotionally manipulative person possible,” she said, candidly. “Then I want to forge an emotional connection and get you to call or write and do something.”

Take a look at those photographs, and read more about the Art Works Projects.

Yes, it is a wonderful world…but there are far too many people suffering in it.

We gotta do it for kids like Sebastian, who are just beginning to understand the world around them.