From our vantage point in the US, Greece seems very far away.  That is an illusion of mere miles.  The disintegration of the Cradle of Democracy 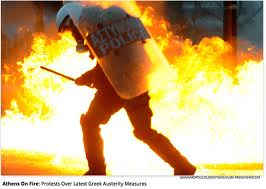 should send shivers down the spine of every American because this is what a plutocracy looks like. This is the dismantlement of a civil society for the sake of the 1%.

Yes, yes, we’ve heard all the stories of the profligate Greeks, lazy to the extreme, addicted to the welfare state, ridiculously high wages and cushy, early retirements.  The Greeks, we are told, are the millstone around the northern European neck, a weak sister draining the stamina and wealth from her industrious siblings, the Germans in particular.

Here are some factoids that don’t match the stereotypes we’ve been fed:

As you might recall Greece’s elected leader George Papandreou resigned [with encouragement] and was replaced by Lucas Papademos, a former vice president of the European Central Bank [what a coincidence!].   Papademos assembled a temporary government then quickly pledged to approve the tough terms of a second European aid package of $150 billion. 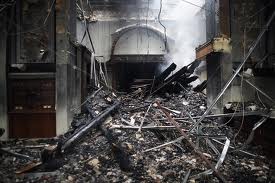 The new, current round of austerity measures, which resulted in citizens taking to the streets and setting Athens afire, will purge another 150,000 public sector workers, mandate a 22% decrease in private sector salaries [the third decrease in less than a year] and substantial decreases in pensions and welfare services.

Mike Whitney at Counterpunch has said this about the new agreement, the Memorandum of Understanding [MOU]:

The Memorandum is as calculating and mercenary as anything ever written. And while most of the attention has been focused on the deep cuts to supplementary pensions, the minimum wage, and private sector wages; there’s much more to this onerous warrant than meets the eye. The 43-page paper should be read in its entirety to fully appreciate the moral vacuity of the people who dictate policy in the Eurozone.

Greece will have to prove that it’s reached various benchmarks before it receives any of the money allotted in the bailout. The Memorandum outlines, in great detail, what those benchmarks are— everything from reduced spending on life-saving drugs to “lift(ing) constraints for retailers to sell restricted product categories such as baby food.”

It just shows what the MOU is really all about. It’s a corporate “wish list”; a mix of punitive belt tightening policies for working people and perks for big oil, big gas, electric, aviation, railroads, communications etc. “Fast track licensing” and “baby food” have nothing to do with helping Greece reach its budget targets. It’s a joke.

Oddly enough, much of this has the ring of the ‘Privatize the World,” theology, so popular with the Republican Party.  Ron Paul?  He finds the idea of all government owned lands very disagreeable.  It should be opened to private enterprise, he has said.  Think of that splendid idea of mining uranium in the Grand Canyon.  The evils of the public sector [that would be teachers and firemen and police] have been eloquently dissected by the likes of Scott Walker now facing a recall in November.  Paul Ryan has thrilled Tea Party aficionados by warbling vouchers = Medicare and offering schemes to privatize Social Security. Public schools?  Don’t fix them, critics say, replace them with private, for-profit Charter schools because for-profit universities have been such a treat for many low-income students, strapped with unsustainable debt and worthless, unaccredited degrees. Prisons?  Turn them private and watch costs escalate to the moon.  Taxes?  We all know the mantra: we cannot possibly tax the ‘job creators.’  Accountability in financial matters?  See the ‘deal’ the Administration’s Fraud Task Force crafted with the TBTFs. Respect for the environment?  Go no further than the proposed Keystone Pipeline, but never forget the Gulf of Mexico, the shameless behavior of BP and their political handmaidens.

The beat goes on.

These are self-serving reasons to sit up, listen and pay attention before it’s too late.  On a more human level is this: 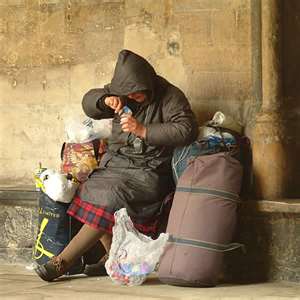 Athens has always had a problem with homelessness, like any other major city. But the financial and debt crises have led poverty to slowly but surely grow out of control here. In 2011, there were 20 percent more registered homeless people than the year before. Depending on the season, that number can be as high as 25,000. The soup kitchens in Athens are complaining of record demand, with 15 percent more people in need of free meals.

It’s no longer just the “regulars” who are brought blankets and hot meals at night, says Effie Stamatogiannopoulou. She sits in the main offices of Klimaka, brooding over budgets and duty rosters. It was a long day, and like most of those in the over-heated room, the 46-year-old is keeping herself awake with coffee and cigarettes. She shows the day’s balance sheet: 102 homeless reported to Klimaka today.

“Enough is enough!” said 89-year-old Manolis Glezos, one of Greece’s most famous leftists, who long ago tore down a Nazi flag under the noses of German occupiers. “They have no idea what an uprising by the Greek people means. And the Greek people, regardless of ideology, have risen.”

“I can still remember as a boy how it was during the great famine and great freeze of the winter of 1941,” said Panaghiotis Yerogaloyiannis, a former mariner now surviving on a pension of €500 [$650.55] a month.

“We have a different sort of war now, one that’s economic, that’s not fought on the field. But it’s still the same enemy, the Germans. And today you are not even allowed to protest. I carry this around,” he said producing a wooden baton from a plastic bag, “to protect myself from the police and thugs who hijack our demonstrations.”

Athens was burning on Sunday.  Beneath the rubble, it burns still. No, we are not Greece.  But Athens has sent a clear, unmistakable signal.  It should be a warning to us all. 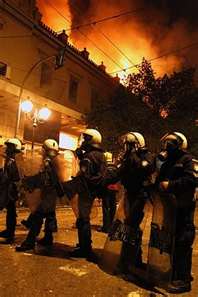