Larry Summers And Another Luddite Analogy

A hattip to United Republic, their new site Republic Report and for this ‘most’ enlightening tidbit on Larry Summers. 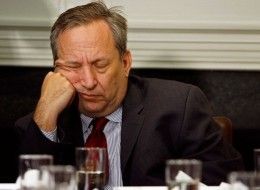 The Larry Summers that President Obama chose to head the White House National Economic Council, even after the blowback from Summers receiving beaucoup speaking fees in 2008 at banking meetings, as in JP Morgan dishing out $67, 500 for a February engagement.  This, after JP Morgan reaped $25 billion in Government bailouts.  Or Citigroup, another happy camper after receiving $50 billion in taxpayer monies, found enough spare change to pay Summers on two occasions, once for $45,000 and two months later for $54,000.  Or everyone’s favorite, Goldman Sachs. Sachs was really generous after receiving $10 million in bailout funds but managed a double decker of $135,000 for one appearance and another for $67,500 eight weeks later.

Oh, and Summers also had managed another $5.2 million, an easy-peasy salary from D.E. Shaw, which just happens to be a major hedge fund.

When Summers exited his WH duties, he hit the lecture circuit once again. His love of giving speeches seems to have slipped under the radar.  Until it didn’t.  Interest appears to have shredded the text of his presentation at a particular business forum.  Mysteriously, the stirring words disappeared and no one could retrieve then.  Poof!  But here’s what we know: this time Summer’s concluding keynote speech celebrated the wonders of outsourcing and off-shoring jobs.  Here’s a brief statement from the catalog introduction of the 2011 World BPO/ITO Forum:

Resisting the prospect of offshoring withholds a major totem of competitive parity from the most profitable producers of economic progress, Dr. Summers said. “It is to deny the US and American businesses an opportunity to participate in this revolution in emerging markets, which is the most important economic story of our time.” He added that increasing trade in tasks makes businesses more efficient and competitive, and allows them to exploit different skills, capacities and labor costs anywhere in the world. Critics who automatically label outsourcing or offshoring a threat to prosperity “resemble luddites who took axes to machinery early in England’s industrial revolution,” he said. Instead of killing jobs, as luddites feared, machines spawned millions of jobs and better standards of living.

Oh yes, I’m sure the majority of Americans now collecting unemployment or those working two, three jobs to pay the electric bill, buy the Kraft mac and cheese dinners in bulk, while hoping to God no one in the family gets sick could appreciate this finely-tuned statement.  But this statement [though applicable to many workers] was specifically directed to business process [as in payroll, tax and benefits] and IT workers—you know, all those geeky kids that were told ‘Go for the computer degree.  You can’t go wrong.’

Because those innocent initials in the forum’s title?  That would stand for ‘business process outsourcing/information technology outsourcing.’

And people wonder why there are so many college grads with gargantuan school loans associated with the Occupy Wall St. Movement.  These grads are mad as hell and not getting over it.

But notice the analogy that Summers uses for describing critics of massive outsourcing of jobs, jobs, jobs.  Critics are Luddites, Summers says, no better than the extremists who smashed machinery during the early days of the Industrial Revolution.  I suspect there are ‘things’ citizens would enjoy smashing right now.  And it’s not the machines.

But here’s the word that flew out at me: exploit, as in exploitation:

Ding, ding, ding!  We exploit our natural resources, our fellow citizens.  We exploit immigrant workers, every chance we get.  And we exploit the system by having people like Larry Summers, whirling through the revolving door of government/business, and then pretending the damage left behind is a good thing, the most important economic story of our time.

How about the biggest heist of all time!

But it gets better.  We get to exploit workers in other countries, too, making their lives so miserable they threaten to commit suicide en masse.

What’s not to love?

If this sort of thing wasn’t so sickening, it would be laughable.

I am not laughing.

Btw, the Republic Report site will be tapping none other than Jack Abramoff for an insider’s view of  DC corruption and influence peddling.  Super-lobbyist Abramoff, released from jail last year, will be a regular contributor to RR because if you want to catch a bunch of rats what better strategy than employ a King Rat?

Could get very interesting!

10 Comments on “Larry Summers And Another Luddite Analogy”