Today has been one of those days, you know the ones where you wake up with a foreboding feeling. Most of the day was spent at the kids Orthodontist. I just have to say that orthodontics have come a ways since the days of headgear. Who knew that torture devices can be found at your local “braces” office. They put this Herbst Device on my son…to give him a more pronounced jaw and chin, it was purely cosmetic. 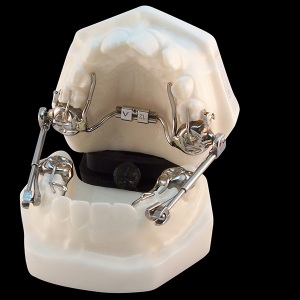 This thing is like a medieval rack for your mouth. And what bothered me is that this doctor’s office would not give us any written literature on the device, until after it was put in. (The office workers are not allowed…a bit strange yes?)

Well, needless to say, the kid had to go back to the office and get the thing taken off. So I have no idea what has gone on in the world today, and honestly I don’t want to know. It is nice sometimes to be in an oblivious fog.

These items for you tonight are articles I came across this morning, hopefully they are new to you.

Karen Santorum (née Garver) proclaims herself pro-life and eschews women who live with men “out-of-wedlock,” an injunction Rick claims is Biblical. But as a nursing student at Duquesne University, Karen Santorum lived with Tom Allen, an obstetrician-gynecologist (ob-gyn) who was 40 years her senior (she was 20 and the doctor 60 years of age). Allen had in fact delivered Karen as a baby. He was also a co-founder of Pittsburgh’s first abortion clinic.  At the time that she had the sexual affair with Allen, Karen Garver (Santorum) was pro-choice.  When she met Rick Santorum, she was eager and delighted to tell Dr. Allen that Rick Santorum was pro-choice.  As Dr. Allen told a Pennsylvania newspaper in 2005 (see Philadelphia Citypaper):

“When she moved out to go be with Rick, she told me I’d like him, that he was pro-choice and a humanist,” said Allen, an elderly but vibrant man, during a brief conversation on the porch of his Pittsburgh row home. “But I don’t think there’s a humanist bone in that man’s body.”

The Santorums condemn Hillary Clinton’s book It Takes A Village as being “anti-family.”  In response to Clinton’s book, Rick wrote It Takes A Family: Conservatism and the Common Good (449 pages). On page 138 Santorum wrote:

“The notion that college education is a cost-effective way to help poor, low-skill, unmarried mothers with high school diplomas or GEDs move up the economic ladder is just wrong.”

“It’s amazing that so many kids turn out to be fairly normal, considering the weird socialization they get in public schools.” At one point, he accuses feminists of hating women, yet in speeches he claims that feminists are lesbians.

The Santorums argue that the parents must protect their children from any dissettlements that could jeopardize the childrens mental health. However, the Santorums took home a 20-week-old dead fetus for their children to play with and kiss, before they buried Gabriel the next day.

There are other items in this article, some of which have been discussed on the blog before. I just found the info on Karen interesting.

Over 10,000 students from 91 countries entered the first-annual Google Science Fair, and 15 finalists (nine of whom were boys) were selected to present their research to judges at Google’s headquarters in Silicon Valley.

17-year-old Shree Bose from Fort Worth was awarded for her research on a chemotherapy drug, cisplatin, that is commonly used to treat women with ovarian cancer. Bose discovered a cellular energy protein that could keep cells from growing resistant to cisplatin over time.

In the 15-16 age group, Naomi Shah won with her study of the effects of air quality on lungs, focusing on individuals with asthma. Lauren Hodge dominated the 13-14 age group with her research on whether various marinades reduce the level of carcinogens and other cancer-causing compounds produced when grilling meat.

Video at the link…

Those are some amazing topics, and these girls give hope that we are not going completely the way of the saddled dinosaurs. Those who are reading or have read Charlie Pierce’s book Idiot America know what I am talking about.   If you are not familiar, take a look at that link…

In olden days, every village had one: an idiot. Just one, though. A village with too many idiots collected the extra ones and put them on a ship of fools.

Today, fools flourish. They are not banished from sight, but allowed to thrive everywhere you look: Sunday church, radio, TV, Washington, banks and blogs.

Charles P. Pierce, staff writer for the Boston Globe Magazine, has written a book about them: “Idiot America: How Stupidity Became a Virtue in the Land of the Free.”

Passing underneath rather a lot of low-hanging fruit, he stops to ponder, for example, the fundamentalist mayhem surrounding Terri Schiavo, the brain-dead woman in a Florida hospice who some believed might rise to run a marathon, or the last election, given its shortage of sane candidates.

Pierce is contemptuous of educated elites who abuse the credulous for power and profit, but takes a softer tone to some of their victims, say the happy dummies who wander through the Creation Museum in Petersburg, Kentucky, which includes a small, saddled dinosaur that might have fit into Noah’s Ark — and thus qualified as one of God’s creatures.

And with this in mind, I will end with the recent study that shows: BBC Nature – Crested macaque monkeys follow friends before family

Crested macaque monkeys look to their friends for “guidance” more readily than to their family, according to scientists.

The University of Portsmouth team that made this discovery measured how quickly one monkey would follow the gaze of another.

The findings are published in the journal Animal Behaviour.

They reveal, the researchers say, the importance of friendship in complex societies, where animals live together and rely on one another.

“We [study these primates] to try to explain how our own social system evolved,” explained lead researcher Jerome Micheletta from the University of Portsmouth.

“We want to know why we humans form groups and… social relationships.”

Mr Micheletta, who is studying the behaviour of macaques as part of his PhD, said that previous research on social primates had already shown how important friendship was in terms of “fitness, reproductive success and the reduction of stress”.

“But there’s little evidence about how social relationships and friendship actually affect behaviour,” he explained to BBC Nature.

Give that link a read, it is interesting to see how the scientist observed the behavior…maybe they need to do the same thing to both parties, the Dems and the GOP.  I don’t know about you, but I think there is a link between these monkey’s relationships, and the politicians…media and voters.

What do you think?