← The obesity epidemic
Going around Congress → 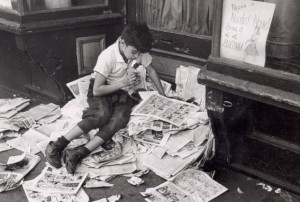 I’ve got a doctor’s appointment this afternoon, so I am just posting a few links for you…when I get back later tonight I’ll post a real evening news post, because there are a few of things that you may have missed.

Cruelty in today’s society, it makes me think of Dickens when I read about something like this:

Last month, a Time Warner Cable customer service rep died at her desk. After any unexpected death, people searched for answers, explanations, someone to blame. But in this case, there may have actually been something foul afoot. A local news station reports that after a co-worker began giving CPR to 67-year-old Julia Nelson, a supervisor allegedly told her to stop and “get back on the phone and take care of customers.”

Nelson slumped at her desk at the Time Warner Call Center in Garfield Heights, Ohio, and wasn’t breathing by the time paramedics arrived. But before that happened, a co-worker rushed over and began administering CPR, the woman told WOIO, only to be asked to stop. Employees at the scene have confirmed this report.

Read the rest at the link, the incident is being investigated, I feel so sorry for Julia Nelson’s family…

Politico is reporting that nearly 200 companies are lobbying the Super Committee.

THE NEW GUCCI GULCH: 200 LOBBYISTS REGISTER ON SUPERCOMMITTEE — “In just six weeks, nearly 200 companies and special interests have reported that they’re lobbying the 12-member supercommittee. It’s a stunning ratio of lobbyists to lawmakers but makes sense when you consider the high stakes faced by interests ranging from the health care industry to Native American tribes. The groups fear the supercommittee will find $1.2 trillion in deficit reduction before Thanksgiving by cutting their funding or raising their taxes,” Anna Palmer and Fast Break report for the hometown paper. “The scale of the effort, tabulated by POLITICO in a review of recent federal filings, suggests that companies are taking the committee seriously and hoping to blunt whatever comes their way, even as hopes fade on Capitol Hill for a major deal. ‘There isn’t much of an upside here in terms of what we’re doing. … It’s not like they are looking at ways to improve anything,’ said Rick Pollack, a lobbyist for the American Hospital Association. ‘They are just looking at ways to chop.'”

And did hell just freeze over?

You know things are bad in this country when you have Tom Donohue, President of the US Chamber of Commerce, and Richard Trumka, President of the AFL-CIO agreeing with one another. And when you have that kind of agreement, that means something so inarguable, so unassailable that to take a differing stance would forever paint you as an unserious idiot, unworthy of any attention.

And Tom Donohue, despite his treading on ethical and legal edges in his GOP pandering and international campaign money laundering, is no idiot. Despite all of his wailing and whinging over the deficit just a few short months ago, Donohue is fully on board the “let’s get jobs” wagon.

And where do we get these jobs? Infrastructure.

What are you finding in today’s newspapers and websites?