← The Great Obama Mystery
How many S’s in a Senate Sentimental Statement make for a Symbolic Surreal Exercise in inSanity? →

Good afternoon/evening, we have a satellite dish guy out here upgrading my parents system.  They have had the same receivers since the early nineties…that is 1990’s and from the reaction of the dude fixing the connections, it seems that their equipment is reminiscent of stepping into a time warp.  It reminds me of when my Nana got rid of the rental dial phone she had in her house from when they built it back in the 1950’s. Can you believe she paid 3 bucks a month for the privilege of renting a phone from Southern Bell up until 1991? Over 45 years…crazy innit?

Okay, enough of the BS, let’s get down to the latest news being reported.

This USA Today link says no Tsunami alert was sent, however, two other news agencies are reporting differently:

“Sea level readings confirm that a tsunami was generated,” the center said. “This tsunami may have been destructive along coastlines of the region near the earthquake epicenter.”

I wonder when the big one will hit over in the US Northern Pacific Coast, with the big quake in Japan…and the ones here in New Zealand, the Pacific Rim is sure to make some adjustments around the other half of the ring of fire. 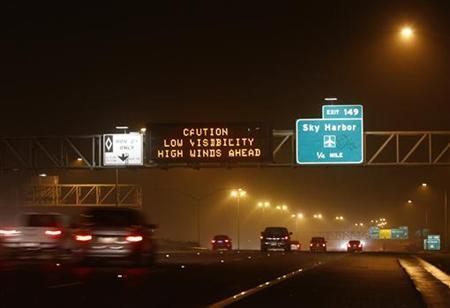 Day turned into night as the billowy plumes of dust rolled over the mountains and clogged the skies over and around Phoenix in the late afternoon and into the evening on Tuesday, applying a good coat of dirt to the surroundings.

“Where we are, it looks like Mount Saint Helens,” Jeff Lane, a spokesman with the Salt River Project utility, told Reuters.

“It looks like we had an eruption with all the dust that’s all over the parking lot,” he added.

The storm downed trees, tossed yard furniture, and snuffed out visibility across an area of some 50 miles at its peak on Tuesday evening, although there were no reports of any fatalities.

Airports have been closed, and some are out of electricity.  There is a video of it here: Giant dust storm hits Arizona | Video | Reuters.com

Two other quick links for you:

Wonder if he will end up over at Current TV.

Accusations surface of possible hacking attempts by the News of the World into the cellphones of relatives of victims of criminal and terrorist attacks. Prime Minister David Cameron backs calls for public inquiries, and advertisers pull out of the Rupert Murdoch publication.

That article to LATimes will give you a background of what is going on. For more details read The Guardian here.  Phone hacking | Media | guardian.co.uk It looks like this scandal is getting more attention now…bout time.

Now, on to something that makes my nipples stand to attention…call it a personal sexist radar reaction to some TSA reports that make my head spin…I mean, as if the groping of our crotches wasn’t enough?

The feds said Wednesday that new intelligence shows terrorists may try to sneak explosives onto airplanes by surgically stitching them inside suicide bombers.

The Transportation Security Administration has briefed airline executives on the possibility, but emphasized that the information did not constitute an imminent threat, a U.S. security official confirmed.

Hmm, I can just see the perverts at the TSA using this to feel up women left and right.

It’s unclear if the threat means that already “enhanced” TSA patdowns would get even randier.

“Our security procedures are multifaceted, and we adjust them according to the threat all the time,” said White House spokesman Jay Carney.

Oh great…you know, if they are going to be having breast exams available at your local airport, I suggest installing stirrups at the check points as well…might as well get your Pap Smears too.

Then the GOP can really cancel and defund all women’s preventative health check screening.  I mean, the people flying these days surely are able to pay the outrages fees charged for airline travel…so essentially the same poor women, who don’t have the money to fly will still not get their reproductive health check-ups.

What do you think? Should we send this suggestion to Rick Scott down in FLA? Of course, before any these women get felt up by TSA in FLA, they’ll need to take a drug test, of which…they must pay for themselves. Hell, just tack it onto the airline fees…

Paying Delta to have your bags checked takes on a whole different meaning!