Good late night!  Here is an open thread for you all. With the recent news about women being pushed back and not forward, I thought we should have a post with some uplifting links about women that have broken through barriers and done some extraordinary things.

In honor of my little girl learning how to fly an ultralight airplane without any assistance, I would like to highlight Women Aviators…

(Isn’t is great to see her flying on her own? I am very proud of my daughter!)

This link has a history timeline listing special dates and descriptions of Women and Flight.  The timeline starts in 1784 through 2001. Women in Aviation – Timeline – Pilots – Flying

1910 – September 2 – Blanche Stuart Scott, without permission or knowledge of Glenn Curtiss, the airplane’s owner and builder, removes a small wood wedge and is able to get the airplane airborne — without any flying lessons — thus becoming the first American woman to pilot an airplane

1910 – October 13 – Bessica Raiche’s flight qualifies her, for some, as the first woman pilot in America — because some discount the flight of Scott as accidental and therefore deny her this credit

1913 – Alys McKey Bryant is the first woman pilot in Canada

1929 – Amelia Earhart becomes the first president of the Ninety-Nines, an organization of women pilots.

1931 – Ruth Nichols fails in her attempt to fly solo across the Atlantic, but she breaks the world distance record flying from California to Kentucky

The Smithsonian has some more history about American Women in Flight, including some wonderful images.  Flying With America’s Most Famous Female Aviators | History & Archaeology | Smithsonian Magazine

Flying With America’s Most Famous Female Aviators
Dozens of talented women preceded Amelia Earhart, and thousands have followed, and each has her own groundbreaking story to tell 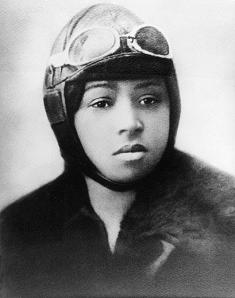 Turned down by U.S. flight schools because she was black, Coleman went to France, where in 1921 she earned the first International Pilot’s License issued to an African-American woman. Returning to the U.S., where she was annointed “Queen Bess” by aviation enthusiasts, she flew at exhibitions and encouraged blacks of both sexes to take up flying. Before she could raise the money to open a flight school, she was thrown to her death in 1926 as her plane went into a spin while she was rehearsing for an airshow.

Please go to the Smithsonian link for other biographies and pictures of some brave fly girls.

Shorpy also has some cool images of Women in Aviation at this link here.

Aviatrix Publishing, Inc. founded Woman Pilot Magazine in 1993 with the goal of profiling the accomplishments of women in all aspects of aviation. Since 1993, we have published hundreds of articles featuring female aviators.

So, do you have any interesting stories or pictures or links you would like to share about amazing women?

Let’s see what you got in the comments below!