← Our Oceans are in Trouble
SDB Evening News Reads for 062011: Open Thread News → 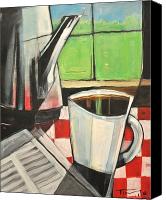 Yesterday, Newsweek published a list of job-creating strategies by former President Bill Clinton. The headline is “It’s Still the Economy, Stupid.” I’m not going to excerpt from the article, you can read it at the link above.

But I’ll share part of the bad review Dean Baker gave Clinton’s suggestions, some of which seemed credible to to me. Dean Baker really has a bug up his a$$ about Bill Clinton. He makes a case that we began losing manufacturing jobs under Clinton and Bush simply continued was Clinton’s policies. I’d be interested to hear people’s responses this critique.

I don’t watch the Sunday shows anymore, but I learned from Steve Benen that Senate Majority Leader Mitch McConnell was asked about jobs and unemployment on Face the Nation this week.

On CBS’s “Face the Nation” yesterday, host Bob Schieffer asked Senate Minority Leader Mitch McConnell (R-Ky.) yesterday, “Do Republicans have any plans to do anything on the unemployment front or are you just going to let things take their course?” It seemed like a good question.

McConnell replied, “No, I — I think — what — what we’re doing is encouraging the president to — to quit doing what he’s doing.”

Clearly McConnell isn’t even worried enough about the current unemployment crisis to have even thought about a response to what should be an obvious question.

From Jay Bookman, I learned that McConnell’s primary concern is “overregulation.”

McCONNELL: If you talk to business people and Bill Daley, the present chief of staff did recently, you find out their biggest complaint is overregulation. You know, the federal government with that stimulus money hired a quarter of a million new employees. These people are busily at work trying to regulate every aspect of American life in– in health care, financial services, through the Environmental Protection Agency, really sort of bureaucrats on steroids that are freezing up– the private– private sector and making it very difficult, Bob, for them to grow and expand. You know, you’re seen the reports that they’ve two trillion in cash. The reason they’re not investing that in hiring more people is the government has made it very expensive to expand employment.

His recommendations for Obama:

Quit overspending. And we’re hoping with the debt ceiling discussions we can begin to address deficit and debt. And second, they need to quit over-regulating the American economy. This is something they can do on their own. They don’t have to come to us for permission to rein in these regulators who are really at work across the American economy making it very, very difficult for businesses to function.

What about the Democrats? Benen links to this piece at Politico: Democrats eye new jobs agenda.

Senate Democrats are beginning to fear that the country’s increasingly dim economic outlook will cost them their seats in 2012 and are trying to craft a new agenda aimed at spurring job creation.

Wow! The Dems in the Senate have finally figured out that they might be in trouble with the electorate. Someone go find the President on the golf course or the basketball court or whereever he’s hanging out today and tell him the breaking news.

Fearing the economy may be getting worse, Democrats plan to soon unveil what they’ll call a “Jobs First” agenda — and the stakes are high. A bleak economic outlook, like the May jobs report, could cost Democrats their thin Senate majority and even the White House if they can’t make a strong case to an anxious electorate that their policies will create jobs.

“Jobs First?” Isn’t it a little late for that? It has already been “Wall Street First” for three years. Maybe “Jobs Second” would be a little more accurate, although I doubt if this latest project will amount to anything.

In a private conference call with a handful of university students across the country, GOP Presidential hopeful — and President Obama’s former Ambassador to China — Jon Huntsman argued in support of one of the most far-reaching, controversial elements of the conservative political agenda.

As first reported in a broader piece by the Huffington Post, Huntsman argued in favor of a constitutional amendment requiring the federal government to maintain a balanced budget — an innocuous-sounding, but radical plan pushed by Sen. Jim DeMint (R-SC) and numerous other congressional conservatives.

At its core, a balanced-budget amendment would make it unconstitutional for the government to spend more than it collects in revenue — a requirement that, without safeguards, would make stimulus and emergency spending impossible.

I’ve noted previously that Jon Huntsman’s campaign strategy appears to be to match a moderate, conciliatory tone with an orthodox conservative policy platform. And sure enough, he’s endorsing a balanced-budget amendment. It’s not clear if the specific balanced-budget amendment he’s endorsing is The Worst Idea in Washington — in which case, Huntsman will have to explain how he’ll handle the fact that Paul Ryan’s budget, which he has also endorsed, will be unconstitutional — or just a relative of it. Either way, it’s not moderate in the least. Which isn’t to say it’s not good politics.

From Andrew Leonard at Salon: The imaginary GOP “moderate” candidate

Reporter Matt Bai manages to deliver more than 6000 words on Huntsman without providing a single practical reason why anyone, Republican, Democrat, or Independent, might possibly consider voting for him. Whether this is because Bai simply isn’t interested in actual positions on the issues or because Huntsman just doesn’t have a platform to campaign on — or some evil toxic combination of both — is hard to say. But the result is just plain baffling. Bai quotes Huntsman as saying “I think what’s going to drive this election, really, are two things — authenticity and the economy” — and then proceeds to write a profile that doesn’t contain a single iota of insight into Huntsman’s views on any economic policy issue.

6000 words — and not a single one of them is “jobs” or “taxes” or “budget” or “deficit” or “Wall Street.” This amounts to political reporting malpractice. If Huntsman isn’t interested in delineating a stance on these issues, then why is Bai bothering to cover him? And if Bai isn’t interested in trying to discern what Huntsman’s stance is, why is the New York Times publishing him?

LOL! That’s pretty funny. Have I ever told you how much I hate Matt Bai?

It’s hard to believe it at this point, but some bloggers are just now figuring out that Obama isn’t “The One.” At Shakesville, Melissa McEwan reacts to a quote from Russ Feingold in which he says Jeffrey Immelt is “not the right guy…”

“It’s not just campaigns and contributions,” Feingold noted. “We have to say to the president, ‘Mr. President, Jeff Immelt is not the right guy – the CEO of GE is not the right guy to be running your Jobs & Competitiveness Council, not when your company doubled its profits, increased his compensation, and asked its workers to take huge pay and benefits cuts.'”

But as I read Feingold’s words—not the right guy—a not fully formed thought that has been hanging around the edges of my consciousness suddenly came sharply into focus: Obama is not the right guy.

Here’s another buyer’s remorse post, and it’s very well thought out and well written. Janet Rhodes has clearly been angry with Obama for quite some time. But she still worked for his Campaign and voted for him. Why? Because he gave inspiring speeches!

Still her rant is worth reading. Fawning comments follow, naturally. Where were all these people back in 2008 when we had a choice? OK, I know I’m beating a dead horse, but still….

Finally, Kathryn Graham’s surviving relatives prove they couldn’t care less about news or the newspaper she valued so highly.

Washington Post Co. Chairman Don Graham sold off about $10 million in company stock days after successfully lobbying to loosen regulations on the for-profit higher education firm that is its most lucrative business.

A spokeswoman for the Washington Post Co. said the sale was on behalf of a trust for one of Graham’s siblings, not for Graham himself, and the company last week amended its filings to the Securities and Exchange Commission to clarify that Graham’s family, rather than he personally, was benefiting from the sale….

The disclosure indicates that the family that owns the paper profited from the bump in its stock price after the regulations became public and drove stock prices up across the for-profit education industry. Washington Post Company stock jumped 9% on reports of the new regulations; it has settled a bit since, but it still trading higher than before the news broke.

Let’s face it, newspapers are dead. Decent reporters should head to the internet.

That’s all I’ve got for today. What are you reading and blogging about?