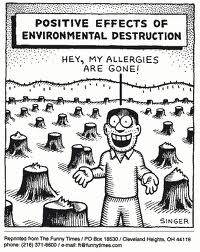 The worst thing about allergies is the sinus headache that makes me feel like an idiot. All that pressure seems to push whatever brain cells I have functioning out of my cranium faster than a GOP politician caves in to the religious nitwits that have taken over the Republican Party.

For commentary on the this, the best reporting of the recent Newt slam fest has to go to Jon Stewart.  When satire is more credible than the reporting from actual news media outlets, you gotta give props (proper respect) to The Daily Show.

Just click the following link for some real analysis of Newt’s latest remarks about his performance on Meet the Press this past Sunday.

Continued on this link below….

And for some pointed discussion on the Rapture that is forecasted for Saturday…and how it relates to busting through the debt ceiling, check this out:

As I said up top, my mind is not functioning as it should, so pardon my half ass comments on today’s post. Here are some news items that are flying across the wires today…

David Dayen reports on the possible illegal activities of the foreclosure procedures when it comes to the county land records. I really hope something comes of this.

Out of the 6,100 documents Thigpen examined, 4,500 showed signature irregularities. The name of one DocX employee, Linda Green, who was acting as a vice president for several major banks, was forged 15 different ways on the Guilford County documents, rendering them invalid. Thigpen’s investigation was one of the first systematic assessments of mortgage document fraud in the entire country, certainly more robust than anything conducted by state and federal regulators.

Dave Dayen and I talked about this Tuesday night on my radio show (click here to listen) and he goes into more detail in this American Prospect article yesterday.

Not satisfied with stripping benefits from state employees, Wisconsin Republicans voted to end about $1 million a year in family planning funding to Planned Parenthood and other health organizations, pushing its war on women and the working class to a frightening new level.

But the reality of the vote is that by eliminating the state’s only family planning program Wisconsin Republicans have put over 50 health care centers at risk of closing.  That means that low-income women in rural areas will lose access to basic reproductive health care since those services come almost exclusively from organizations like Planned Parenthood.

It also re-enforces a theme consistent among Republicans that women are not to be trusted to make their own health care decisions and need the state to make decisions for them.

It doesn’t stop, does it?

Obama gave his Middle East speech today. Before starting his speech, he gave some credit to the woman who deserves it, Hillary Clinton.

I want to thank Hillary Clinton, who has traveled so much these last six months that she is approaching a new landmark – one million frequent flyer miles. I count on Hillary every day, and I believe that she will go down as of the finest Secretaries of State in our nation’s history.

Obama officially came out and supported the 1967 boundaries between Israel and Palestine.

NationalJournal.com – Obama Urges Israel and Palestinians to Negotiate on Basis of 1967 Borders – Thursday, May 19, 2011

Let’s see what comes of his position on this…Netanyahu already rejects it:  Netanyahu Objects as Obama Endorses ’67 Borders – NYTimes.com

In other news, Goodwin Lui is out.  Cornyn: Democrats To Blame For Republican Filibuster Of Goodwin Liu | TPMDC

“Now what they want is for any Republican nominee, a nominee of a Republican President, to require 60 votes, whereas a nominee from a Democratic President get 51, and that’s just not fair,” Cornyn said. “So I think the same rules should apply. They basically rewrote the rules, and I’m saying we’ll play by the rules that they wrote.”

It is the first filibuster of a judicial nominee since 2005.

Let’s end with this about the Japanese Earthquake…

Now, a study led by researchers at the California Institute of Technology (Caltech), published online in the May 19 issue of Science Express, explains the first large set of observational data from this rare megathrust event.

“This event is the best recorded great earthquake ever,” says Mark Simons, professor of geophysics at Caltech’s Seismological Laboratory and lead author of the study. For scientists working to improve infrastructure and prevent loss of life through better application of seismological data, observations from the event will help inform future research priorities.

“The Tohoku earthquake was recorded by upwards of 10 times more sensors at near-fault distances than any other earthquake. This will provide a sharper and more robust view of earthquake rupture processes and their effects.”

Be sure to post any comments or links you want below.